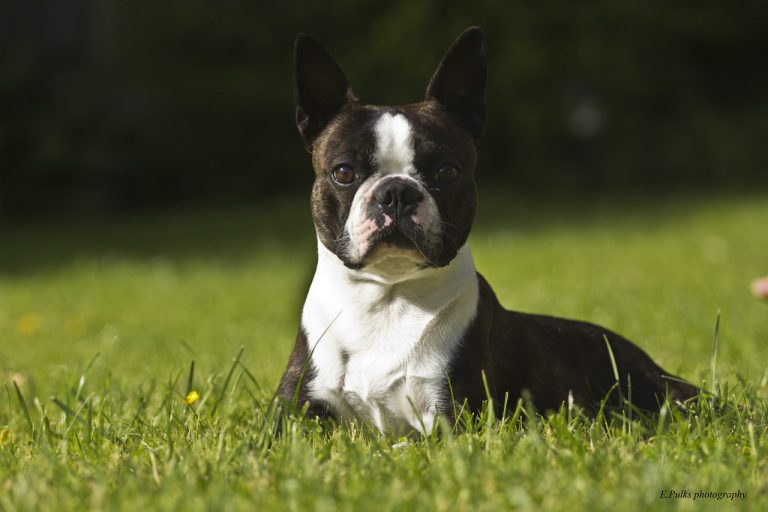 The Boston terrier dog is a happy little pup who is adorable. These short-haired bundles of energy will make a wonderful friend. The Boston terrier breed belongs in the small to medium range, topping out at 25 pounds and standing at 17 inches tall.

And do not worry, you will have a friend for life if you get one. They live between 10 and 14 years. A lot of people mistake them for French bulldog, but they are quite different. For one, they have a leaner body than the Frenchie.

With that in mind, here are some Boston terrier facts and things you probably didn’t know about the breed.

Did you know that the Boston terrier dog breed was the first US breed? This puppy deserves a place in US history books thanks to its American heritage.

The breed originated in Boston, Massachusetts. Everything started with the dog named Judge, who was bred with a female dog named Gyp. They weren’t full Boston terriers themselves, but they have been linked to the origin of the breed.

The American Kennel Club officially recognized the breed in 1891.

Here are some more facts about the Boston terrier dog and its US history. The nickname of the dog is the American Gentleman.

Thanks to his dapper looks and gentle, mannerly disposition, the breed earned the cute and adorable nickname.

The one downside of owning a Boston terrier puppy is you have a brachycephalic breed. What does that mean? Well, it means you have a breed with narrow hips, which means they cannot mate or deliver young on their own.

But the biggest downside of a brachycephalic breed is that there are a lot of health challenges. The Boston terrier dog is prone to have narrowed nostrils and a short soft palate. Because of that, the pup struggles to get enough air. It is even more challenging during hot weather.

The degree of flatness of the face determines how acute the impact of the health concern will be. Those with very flat faces are likely to suffer more from breathing problems. Dogs whose noses protrude from the dog’s face and the nostrils are open are healthier puppies.

The state of Massachusetts is where the journey of the Boston terrier started. They love the breed so much, that they made it their state dog.

On May 14, 1979, the state officially recognized the dog as a state dog. It was proposed by Gregory W. Sullivan.

Here is another fun fact regarding the Boston terrier and the state of Massachusetts. The Boston University made its official mascot according to the looks of a Boston terrier.

Rhett the Boston terrier has been the mascot for longer than the bred has been the legal state dog. He debuted as the university’s mascot in 1922 and has since appeared in many commercials.

Not a toy dog

A lot of people mistake the Boston terrier for a toy dog. He might be a small dog, but he is not that small. He is a popular companion dog. But the American Kennel Club puts him in the utility dog group.

This reflects the dog’s historical working role. Back in the day, he worked as both a ratter and as a fighting dog in some cases. But that fighting dog role was before such sports became rightly outlawed.

They are quite costly

What is the Boston terrier price? Well, as we mentioned before, these puppies cannot mate by themselves. That means they need the help of a veterinarian. Yes, they can have a natural birth. But it is rarely the case. If the male breed is smaller than the female Boston terrier, it is fine. But if the male Boston terrier is the same size or larger, then issues will arise.

Because of this, the price of young Boston terriers can range between $1,000 and $1,500 for a pedigree dog breed. That is the price prospective pet owners should be ready to pay for their companion dog.

The Boston terrier dog breed is a celebrity breed. It has also made its way to the White House. The former president of the US, Warren G. Harding owned a Boston terrier. He named him Hub.

Another resident of the White House owned one as well. That would be Gerald R. Ford, who owned two terriers, Fleck and Spot.

Let’s be honest, how many dog breeds do you know that are fine to be left alone? The Boston terrier is not among them. Yes, crate training helps. But generally speaking, if left alone, they can develop serious separation anxiety.

This is why you should consider how much time you spend at home and with your dog before getting a Boston terrier.

They were made to compete

Initially, these puppies were bred to be a hardy breed that is incredibly intelligent. They are also a popular choice for those who want to train their dogs to do some sports and agility.

Some of the games they thrive in include flyball, a sport that relies on speed and coordination. They also win in agility competitions and navigating obstacle courses.

You might think this small dog will be fine with most things. But they are actually quirky pets that love to remind you of their presence. Known for snoring loudly while sleeping and being gassy, Boston terrier is a loyal and affectionate family dog.

He is also protective of children.

When it comes to terrier breeds, they are known for their high energy and excitement. But the Boston terrier temperament is not like the other terriers.

That is maybe because he is not an entirely terrier. He was bred by mixing Bulldog and a White terrier, the latter is now extinct.

Boston terriers have quite positives on their resume. They do not shed a lot, they do not need a lot of grooming, and they are not challenging to walk and train. And unlike other terriers, they are not prone to dominance.

This is what makes the breed suitable for a first- time pet owners. Yet, it is important you do your research, and see if the Boston terrier dog breed is the one for you.