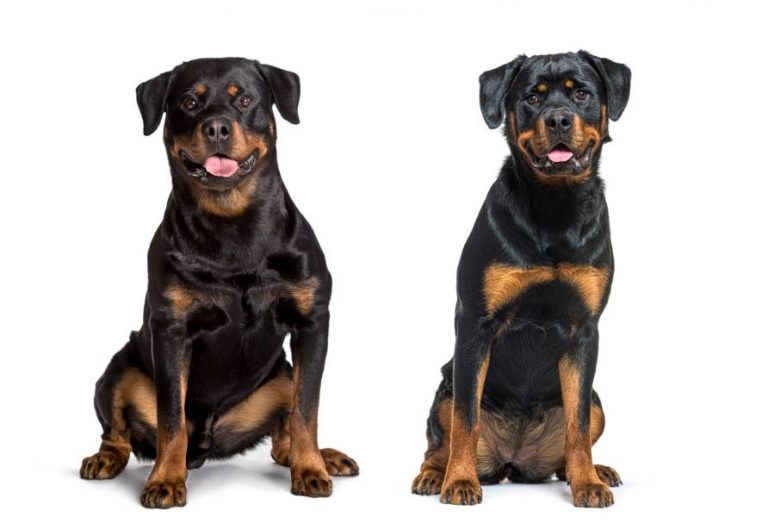 Oddly enough, there are some differences between the German Rottie and American Rottie. Today, we will take a look at these two same, yet different dogs.

In the early days, the original purpose and responsibility of Rottweiler dogs was to drive cattle and protect humans by guarding outposts.

When these puppies reached the region of Rottweil in Southern Germany, they got mixed with native dogs. This is how we got the Rottweiler puppy we know today.

Their name is a direct reference to the city from where they come from, Rottweil. In the beginning, Germans called them Rottweiler butcher’s dogs.

They have been great working dogs since the early days. Besides driving cattle, they used to pull carts, guard homesteads, and even carry money in belts tied around their necks.

In 1910, their service was requested by the police. This is how Rottie became a famous police dog. Despite their status and popularity, Rottweilers faced extinction at one point.

But because a bunch of dedicated breeders put in the effort, they were able to save this Rottweiler dog breed. They have since been developed in America and other parts of the world. And that is how we got the American Rottweiler. 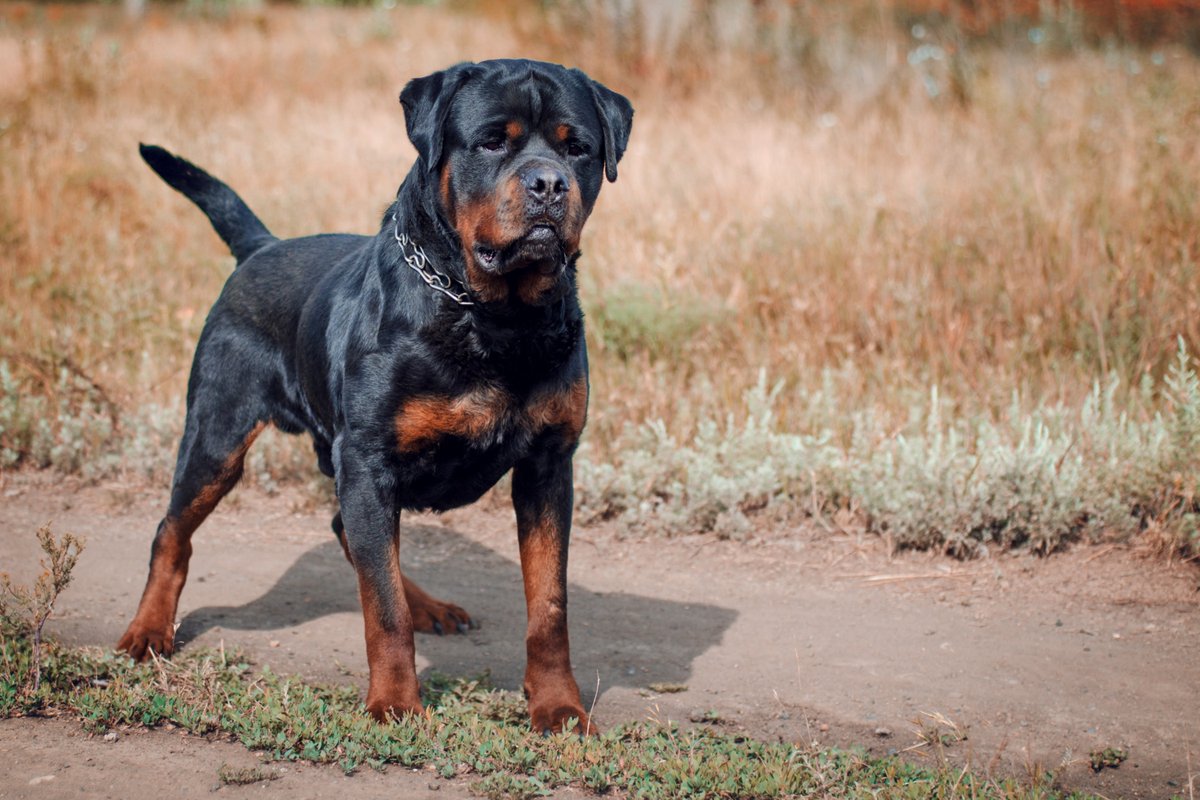 If you do a bit of research, you will find out there are different breed standards for the Rottie. The American Kennel Club recognizes this breed and defines it as a working dog.

The German version is defined as such simply because of its birthplace in Germany. We also have to note that the Allgemeiner Deutscher Rottweiler Klub, or ADRK, does have very strict breed standards. They want their dog to be well suited to assisting human companions.

This means the Rottweiler has to have a mild and calm personality, a sharp mind, and be compatible for use as a companion dog.

The Allgemeiner Deutscher Rottweiler Klub also has a strict no-docking rule. They will not consider the dog a Rottweiler if it has a docked tail. 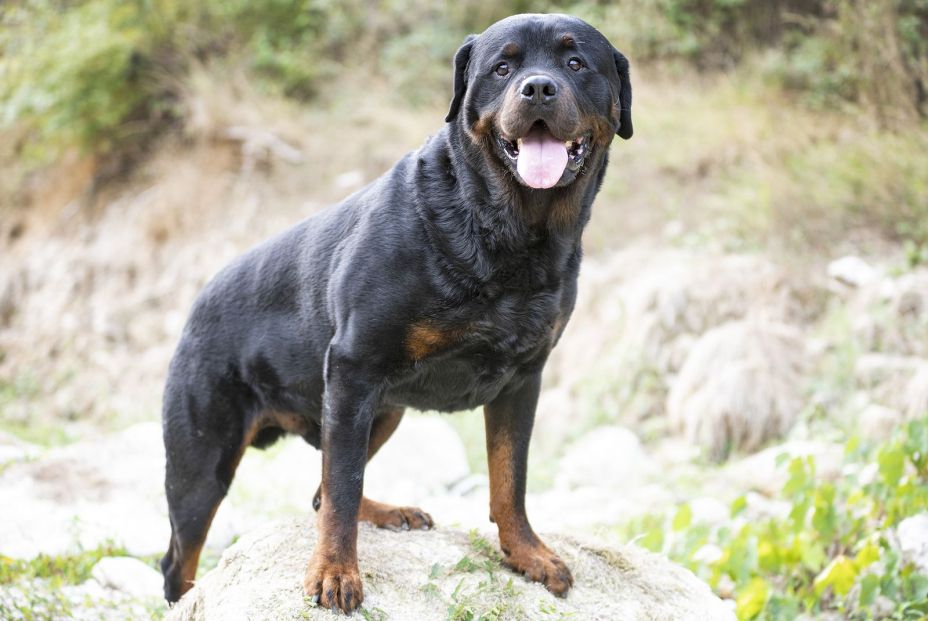 Simply put, the American Rottweiler is the same breed but was born in the United States of America, not Germany.

The main difference between the breed standard is that the American Kennel Club allows tail docking. As we said before, the ADRK does not.

German Rotties tend to be bigger and larger. They weigh between 80 and 110 pounds and grow between 24 and 27 inches high. The Rottweiler is among the strongest dog breeds and early training is a must to help them harness that power.

In terms of physical differences, German Rotties might have the same average height, but they carry it differently. They appear stockier and more muscled, and they often have a broader body shape. They must be short-haired.

German Rottie has a broader nose, almond-shaped eye, triangular ear, and thicker neck. The ADRK has strict breed standards, and they accept only black and mahogany, black and tan, and black and brown coat colors.

American Rottie has a sleek body, he is leanly muscled, and less broad compared to his German counterpart.

The American Rottweiler puppy has a medium-length head that is broader between the ears. 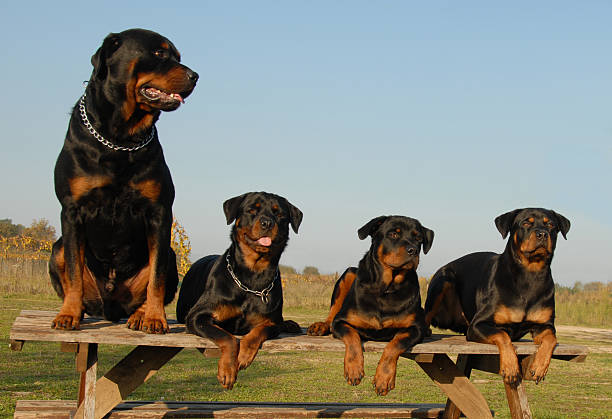 Rottweiler temperament depends on how they were trained and socialized by their dog owner. Yet, there is some acceptable and expected behavior.

The German Rottweiler dog is a courageous and loyal guard dog. It is loyal to its dog owner and family. The German Rottie is a strong fighter that will protect his family. Bred as a human companion, the standard requires a calm temperament and a sharp mind. This dog is a great family pet that can serve as a playmate for kids.

The American Rottweiler dog is also loyal and affectionate to its dog owner. They are also aloof to strangers. Their wait-and-see attitude means they assess the situation and see whether the particular person is a threat or not. They usually approach strangers quietly.

If trained properly, they enjoy a close relationship with children. But make sure to supervise all interactions between your dog and small children.

Because of its sheer power and size, the Rottweiler puppy has to be trained and socialized early on. Only by doing that, it can harness its power and learn to use it properly.

American Rottie is a highly intelligent and trainable dog. This puppy loves pleasing its owner but carries a bit of a stubborn gene inside. Engage them in basic training classes like obedience training and early socialization.

Most importantly, this dog needs a firm owner who knows how to achieve results without being mean. If you roughhouse an American Rottweiler, you will only encourage aggressive behavior.

American Rottweiler doesn’t have any issues with other animals. That is if they are raised alongside them. They might react violently to strange animals or dogs of the same gender.

German Rottweiler is an obedient dog. That is the breed standard set by the ADRK. They are easy to train and respond well to treats.

You should definitely enroll your German Rottweiler puppy in classes that teach obedience, tracking, and protection.

They are no danger to kids or other dog breeds once they are well-trained. 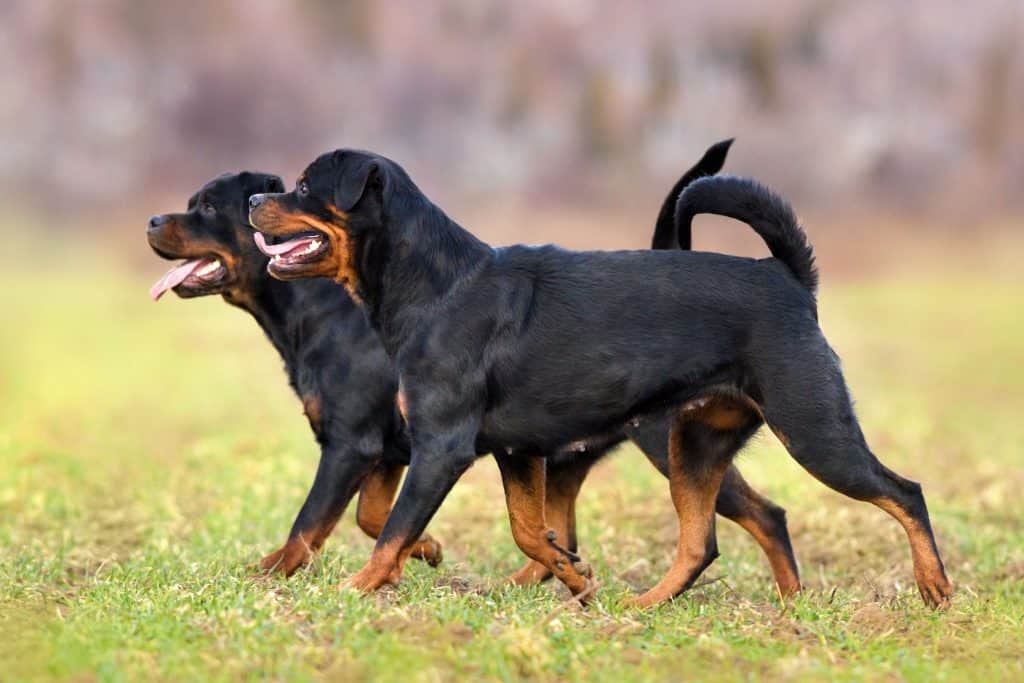 Now let’s talk about German Rottweiler vs American Rottweiler health issues. These dogs look tough and powerful, but they are susceptible to many health problems.

Some of these issues are hereditary. So, make sure to get your German Rottweiler breed from a reputable breeder.

Their average lifespan is between 8 and 10 years. Yes, they can live longer, and you can extend your pet’s life by feeding them a quality diet, providing lots of physical exercise and mental stimulation, and taking them to the vet for routine checkups.

Is My Rottweiler German Or American?

There is very little difference between these two. Mostly, it is about the different values and what is acceptable by the AKC and ARDK.

In any case, if you want a good guard dog, the Rottweiler is a good option. They are on the same level as the German Shepherd dog in that regard.

The German club is very strict about the temperament of the dog and size. That is why it is a slightly larger dog, but not much noticeable.

The American Kennel Club allows for a simply smaller dog with a signature docked tail.