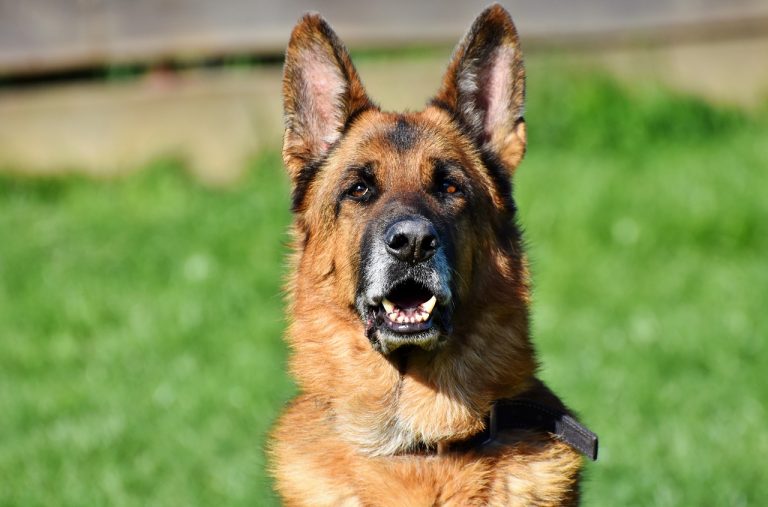 The German Shepherd dog, or GSD as we call it, stands two feet or taller at the shoulder. It is a well-muscled and solid animal. He is a fiercely loyal dog to his family. Famous for its loyalty, the GSD is an easy-to-train dog.

For many years, it is one of the most popular dogs according to the American Kennel Club. Today, we will look at some German shepherd facts that you probably didn’t know about the dog breed.

Hektor was a primal canine type, supple and powerful. Max purchased Hektor and changed his name to Horand von Grafath. To this day, he is the first officially-registered German Shepherd in 1889. And Max is the father of the GSD breed.

He then started to standardize the breed of shepherd dogs.

You can find a lot of dog meme slogans, dog breed jokes, and funny sayings about a different breed. But the German Shepherd breed actually has its own motto.

And it comes from Max and his original German Shepherd Dog Club. The motto is “utility and intelligence”.

Recognized by the AKC

The breed started in Germany, and it took a while before the American Kennel Club officially recognized the German Shepherd dog. That happened in 1908, almost 20 years after von Stephanitz started breeding them.

In 1913, the German Shepherd Dog Club of America was founded.

During World War I and World War II, it wasn’t uncommon for Allied countries to eliminate or change anything with the word German in it. This is why in the United States, the GSD had to become the Shepherd Dog. The club changed its name to Shepherd Dog Club of America. Yes, they have re-added the word German to the name years after.

Fun fact: during war time, England changed the name of the dog to Alsatian.

The war actually helped increase the popularity of the breed. The German Shepherd puppy popularity increased vastly after WWI and WWII. American soldiers saw what the pup is capable of while fighting Germans. So, they brought the dogs back with them to the US.

Fun fact: FIlax of Lewanno was a dog that was honored at Westminster in 1917 for bringing 54 wounded soldiers to safety during World War I.

This was a sport developed in the 1900s for the German Shepherd Dog. The United Schutzhund Club of America says the sport was designed “to test the natural instincts of the breed and to weed out the dogs that were either unstable or untrainable”.

German Shepherd dogs have found fame as movie stars, for example, Rin Tin Tin and Strongheart were extremely popular in the 1920s. But they were also popular as service dogs. Apollo was the first GSD police dog to respond to Ground Zero on 9/11.

Buddy the GSD became the first seeing eye dog to Morris Frank in 1928. He was the first guide dog. Mrs. Harrison Eustis founded The Seeing Eye to train GSD dogs as guide dog helpers for blind people. Morris Frank was a blind man himself. He read about the GSD puppy and contacted Eustis who was already working with GSDs in Switzerland.

Even more, while many people think of GSD in black tan, black, or white color, the AKC recognizes eleven colors. And one of them is the White Shepherd. Another unique coloring is the Black German Shepherd. The official coat color options recognized by the AKC are bi-color, black, black and cream, black and red, black and silver, blue, gray, liver, and sable.

If you have a GSD that is 12 years or older, you can join The Thirteen Club. It is a special German Shepherd club for any GSD owner to join. You just fill an application and you can join the veteran club.

We talked about dogs that popularized the GSD breed. One of them was Etzel von Oeringen, or Strongheart. The male German Shepherd was one of the early canine stars of feature films.

He appeared in The Silent Call, Brawn of the North, The Love Master, White Fang, North Star, and The Return of Boston Blackie.

Here are some German shepherd facts for you. The dog was inducted into the Hollywood Walk of Fame on February 8, 1960.

We said German Shepherd pup is among the most popular dogs in the US. According to the American Kennel Club, he is among the top 3 for many years. But he is popular worldwide. Hundreds of thousands of GSDs appear in 78 countries worldwide. In Germany alone, there are more than 250,000 purebred GSDs.

Today, we use GSD as a working dog, police dog, military dog, guide dog, guard dog, and many more roles. With proper dog training, you can turn these large dogs into anything you like.