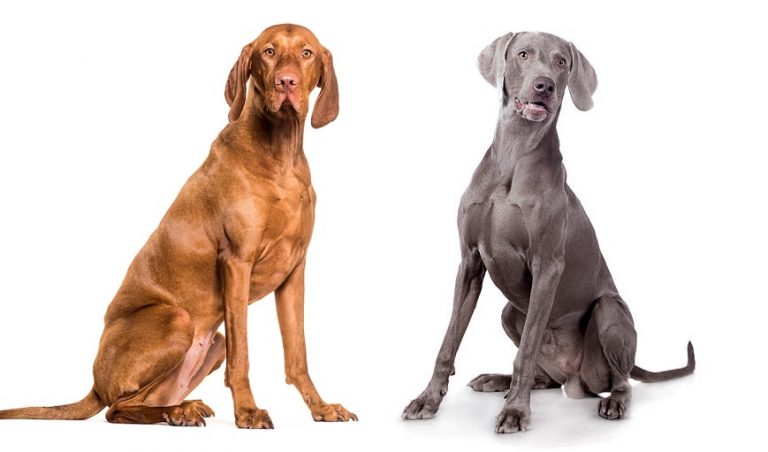 Vizsla and Weimaraner are two dogs of noble descent. They are highly prized. These two may look the same, but there are so many differences. Some might say that they are related. That is not true. Let’s take a look at the Vizsla vs Weimaraner debate.

Both of them are hunting dogs who in the past several years have adapted to family life. As hunting has fallen in popularity, these dogs have found their place in the home as pets and companions.

Today, we will go over every aspect of the Vizsla versus Weimaraner debate, including appearance, training, temperament, health issues, and more.

Whenever you compare two dog breeds, breed history is the first place to start. Why? Because the history of these breeds can help us understand their behavior, temperament, and personality traits. After all, dogs retain their instincts years after they have been domesticated.

The Vizsla breed is one that originates in the Hungarian tribes. When they migrated from Asia to the Carpathian Basin, they brought four types of dogs with them. And one of those was the agile and ancestral Vizsla. Hungarian tribes used this dog for hunting birds by scent.

This is why some people still call the Vizsla a Hungarian pointer. These dogs retrieved, pointed, and tracked game.

Following liberation from Turkish occupation, Hungary became part of the Austro-Hungarian Empire and the Hapsburgs. Hunting switched, going from netting to the use of firearms. Wealthy landowners developed another multipurpose dog, introducing the English Pointer and the German Shorthaired Pointer. The Vizsla breed suffered and its bloodlines were almost lost.

Then, in 1950, the first US breeding program using imported Vizslas began, with Frank Tallman in Kansas City at the top of it. And thanks to their efforts, the breed was restored.

The Weimaraner is a bit younger dog breed, dating to the 19th century. They were developed in a small town in Weimar, Germany. Nobles there were avid sportsmen and hunted big game. They came up with the Weimaraner breed, a dog with exceptional tracking ability, speed, courage, and durability.

According to some sources, nobles created the dog breed mixing Bloodhound, German Shorthaired Pointer, English Pointer, Great Dane, and a few other breeds.

They were used originally to hunt wild boars, bears, and wolves. But once the population of large game declined, nobles switched to hunting smaller animals.

The breed came to the United States of America in the early 1920s. They grew in popularity thanks to the portraits of the famous William Wegman. He dressed his dogs in human costumes.

Sometimes, the breed is referred to as a grey ghost or silver ghost. 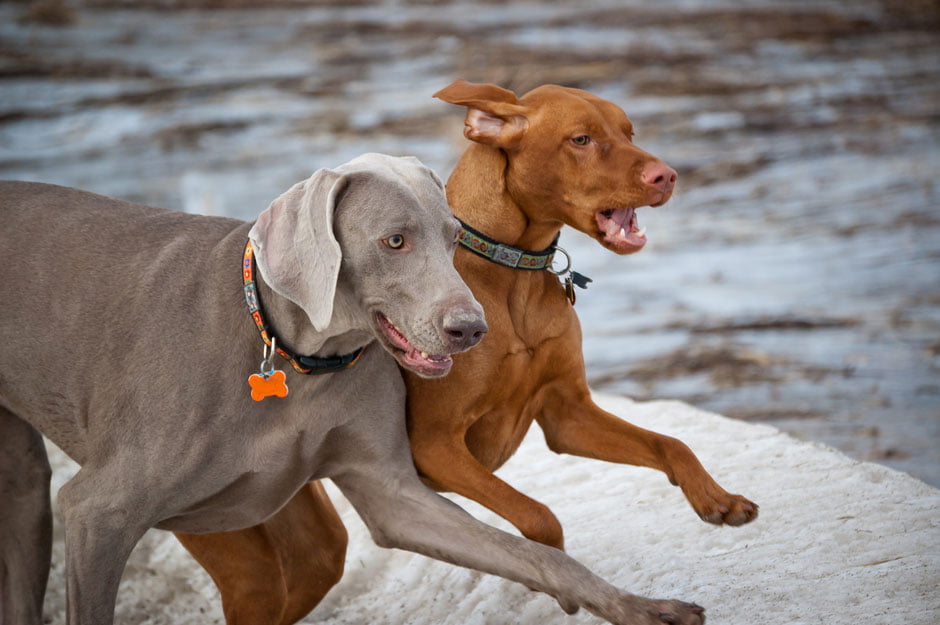 Now let’s get to the nitty-gritty and the breed comparison of Vizsla and Weimaraner. Some people might say they are twins and related. While they look similar, there are quite a few differences as well.

The American Kennel Club has set standards for both breeds. They have a distinguished aristocratic look. These dogs are of medium size with a short coat.

Now, the eyes. Vizsla’s eyes blend with the color of the coat, while the Weimaraner has eyes in light amber, gray, or blue-gray color.

Now let’s talk about their body. The Vizsla has a short back with a non-slopping decline. This breed has a firm backline with a slight rise over a short. On the other hand, the Weimaraner has a back of a moderate length, set in a straight line, and slightly sloping from the withers.

Now let’s take a look at coat color options accepted by The American Kennel Club. The AKC accepts solid golden rust in different shadings for the Vizsla. This puppy has a short coat, smooth and dense, and no undercoat. On the other hand, the Weimaraner has a wider range of solid colors in shades ranging from mouse-gray to silver-gray.

The AKC doesn’t accept the blue or black coat of the Weimaraner. They are possible, but not accepted. 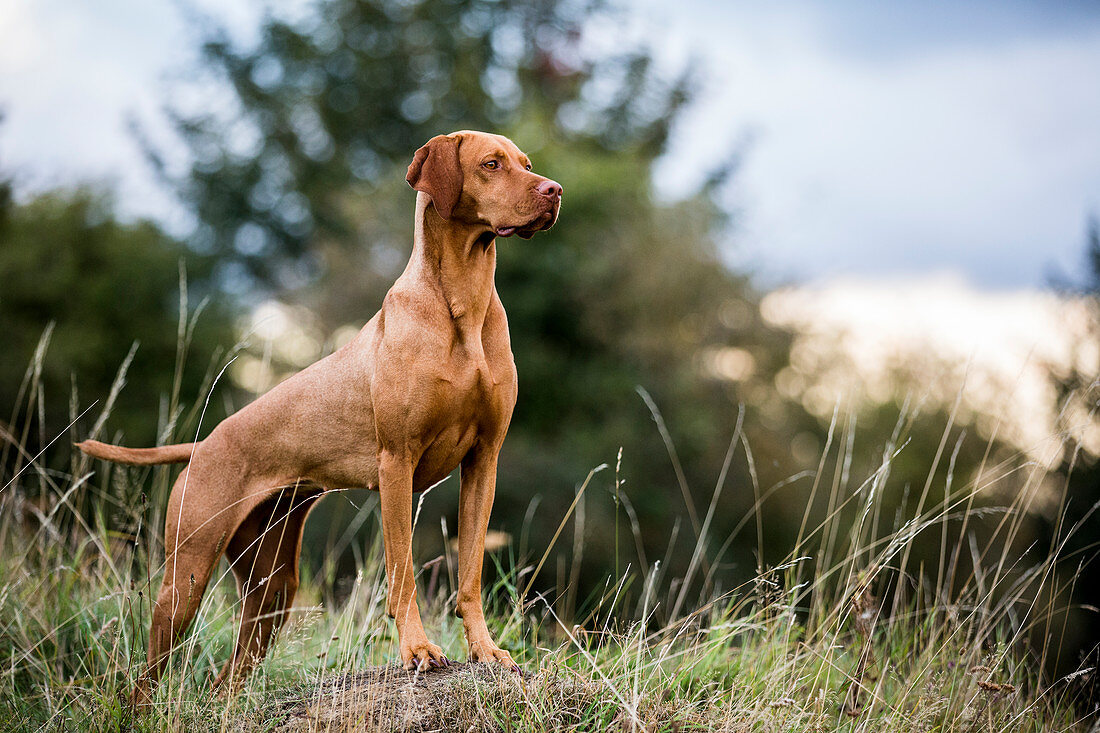 Here is a fun fact. Originally, these two breeds were bred as hunting dogs. But nowadays, they are what we classify as a Velcro dog. They will stick to you and go wherever you go. Because of that, they can suffer from separation anxiety a lot more than your average canine.

They are intelligent and energetic, and can sometimes become restless if they are not stimulated physically or mentally. If you want a clingy canine, a Velcro dog is a great option.

Of the two, the Weimaraner is much more assertive and dominant. This makes it more challenging for a novice dog owner. Early socialization is a must for both breeds. If not socialized, the Weimaraner can become obnoxious and unruly. The Vizsla, on the other hand, is much more submissive and happy to follow orders.

Both puppies have a high prey drive due to their hunting history and instincts. They are not suited for a household with smaller animals or cats.

Weimaraner puppies can also be used as therapy dogs.

With both breeds, positive reward training is the best option. Their eagerness to please can be driven by praise. Tip: use their hunting instinct and sniffing as a tool in your training.

Of the two, the Vizsla is easier to train. With a Weimaraner puppy, training is a lifelong commitment. At any point in his life, this canine can try to assert himself as the pack leader. Any hesitation or weakness on your side will increase that assertiveness. 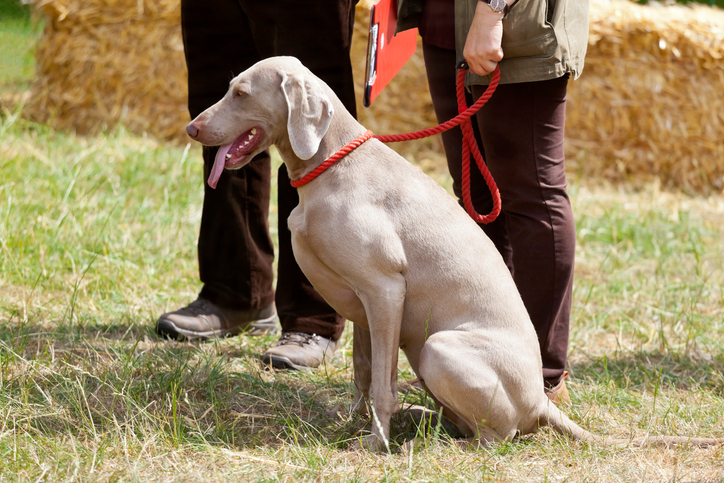 These puppies are very active and need a lot of activity to keep them happy. Physical exercise and mental stimulation are a must. If you are considering Vizsla vs Weimaraner, make sure you have an active family. They are not suitable for families that tend to laze around.

They are similar when it comes to their exercise needs. They need lots of it, and at least one hour per day is a must. The good news is you can bring them jogging with you, ride a bicycle, or hike.

If you do not provide enough exercise, these two can resort to destructive behavior and destroy your furniture. They might also dig in your garden. With that in mind, do not underestimate their exercise needs.

In the early training process, use a loose leash. Do not let them off-leash because of their high prey drive. I would even advise using a leash all the time because no matter how good your recall is, their instinct might kick in.

Which One Is Faster?

These canines are among the fastest in the dog world. Of the two, the Vizsla puppy is the faster one. This dog can reach a top speed of 40mph, while the Weimaraner reaches a speed of 35mph.

For comparison, the fastest dog breed in the world is the Greyhound, which can run up to 45mph. 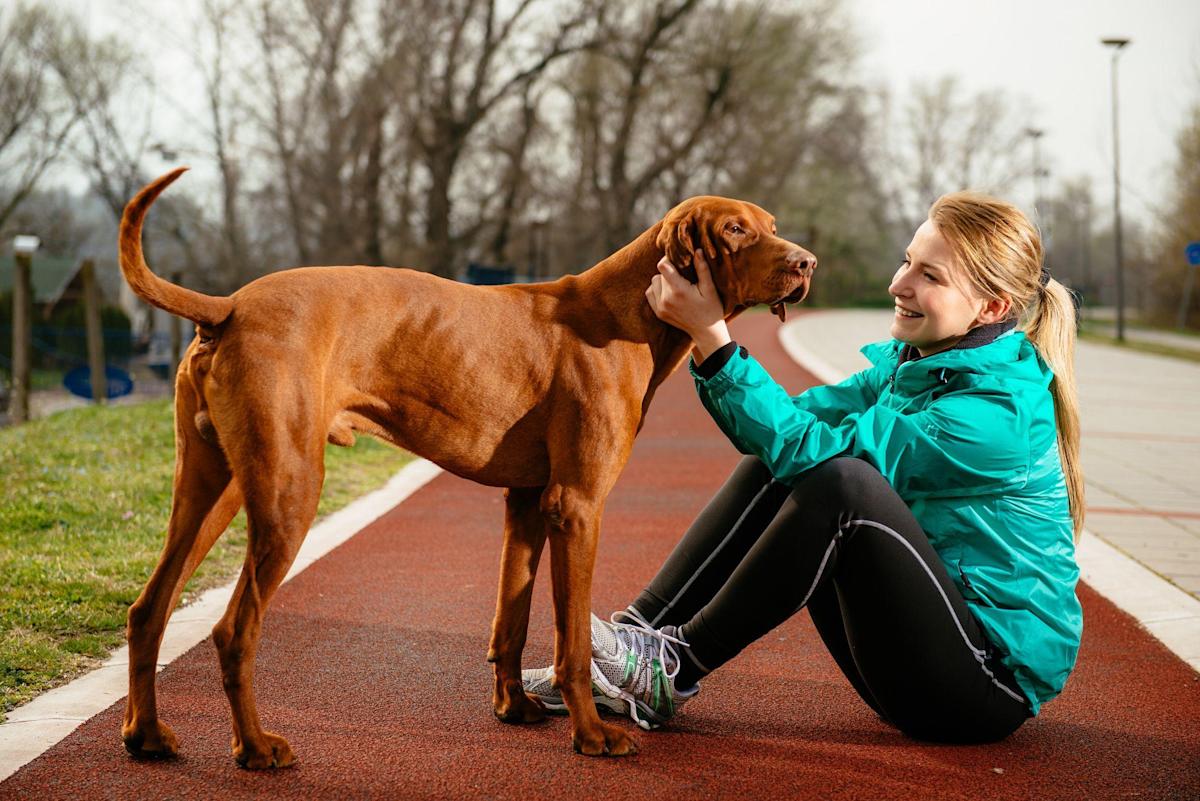 These two are relatively healthy dogs. They belong to the hunting dog breed group, one that is rather healthy.

Yet, some health issues are common, like hip dysplasia and eye disorders like entropion. Make sure to get your pup from a reputable breeder.

As relatively healthy dogs, they have a large lifespan. The Vizsla has a life expectancy of between 12 and 14 years. And the record for longest living Vizsla is 20 years and 6 months. The Weimaraner lives between 10 and 13 years, with the oldest one being 18 years and 10 months.

Both of these dogs will make great companions. Weimaraners are even suitable for older citizens. If you have a family with children, make sure it is an active family. These dogs can be too energetic and boisterous for toddlers who cannot match their activity level. Of the two, the Vizsla is better suited for a multi-pet household.

At the end of the day, it comes down to your preferences. And we are sure you will not make a mistake by choosing either of these two.