American Bulldog vs Pitbull -Get to Know Your Bully Breeds 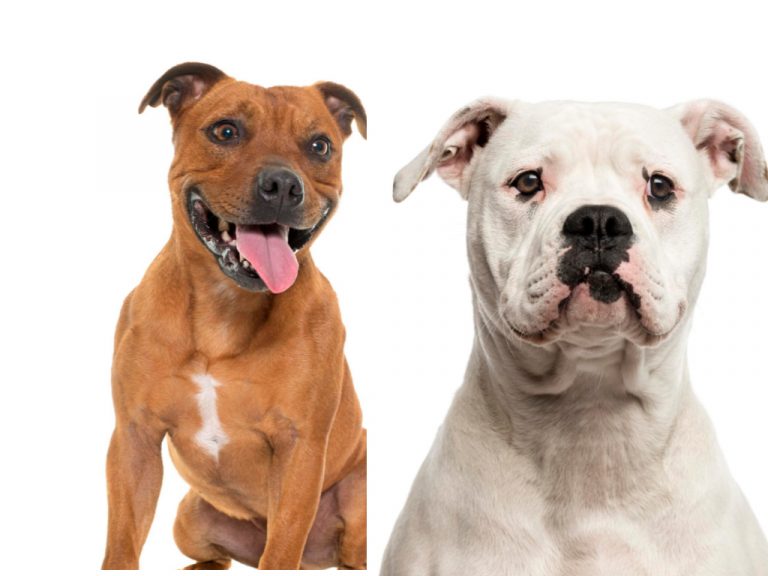 At first glance, these two dog breeds resemble each other. But they are not the same dog breed. Today, we will explore the differences between the two breeds. They are often confused because of their similar physical appearance. The truth is they vary in a number of aspects.

If you look at the general overview, you should understand that pit bull is a term, while American bulldog is a type. American Bulldog refers to a specific breed of canine. The term pit bull, on the other hand, does not.

In England, the phrase pit bull is a shorthand for the American Pit Bull terrier.

American Bulldog, on the other hand, is a pure bulldog breed. Pit bull means certain types of dogs that could be terriers or bulldogs.

Some would say that the American Pit bull terriers are a cross between a bulldog and a terrier. And its terrier lineage comes from the Old English terrier, a dog breed that is now extinct.

Both the American bulldog and the pitbull get their bulldog genes from the Old English Bulldog.

Now let’s talk about the history and origin of the two breeds. This is one of the similarities in the American bulldog vs Pitbull debate. Both were developed in the United States of America from dogs that were originally used for bull-baiting in England.

The Pitbull, or the American Pitbull terrier was developed by breeding Old English Bulldog with an Old English terrier. Both of these came from Ireland and England. It was used in blood sports like bull baiting or bear baiting before they were banned.

Before we get to the American bulldog vs pitbull breed comparison, let’s give a quick overview of both breeds.

For starters, the American bulldog. Thanks to working class immigrants, the dog made it to the US. They brought the Old English Bulldog.

In the beginning, the young puppy was used for all-around farm work. They were good at managing cattle and hunting invasive wild pigs.

But in the first half of the 20th century, the popularity of the dog began to decline and went almost extinct by the end of World War II.

Thankfully, a few breeders saved them and bred them to be family companions rather than farm dogs. Nowadays, the dog is less work-oriented and more accustomed to the delight of family life.

The dog was accepted by the American Kennel Club into the Foundation Stock Service program in 2019. This allowed it to develop as a breed.

The pitbull, on the other hand, is not recognized by the AKC. Originally brought over from England to be used in dogfighting rings or for ratting, the American Pit Bull Terrier remains an unofficial breed. Just for info, ratting was a betting sport where people would bet to see whose dog could kill the most rats the fastest.

Eventually, dog fighting and ratting became less popular, and the Pittie became a farm dog and family companion. Nowadays, it still has a bad reputation because of its fighting days. But the pitbull is a delightful family dog.

Speaking about the temperament of the dogs, the American bulldog is a confident, fearless, courageous, and socially active dog. Known for its loyalty towards its owner, the American Bulldog loves children and people.

In its puppyhood, the dog might be unresponsive to new people. But with socialization, it will become a loving companion. Considered a family dog by most trainers and dog owners.

The Pittie loves to please others. As we said, it has a bad reputation. But it is an emotional dog towards people. Famous for its courage and strength, it makes them a favorite among dog lovers who want a guard dog. The twist here is that pitties do not bark as much and they are not great guard dogs because of their loving nature.

If you put these two side by side, you will instantly notice the differences in their physical comparison. Let’s settle the American Bulldog vs Pitbull debate here.

The Bulldog is a sturdy, muscular, and strong dog breed. It grows between 20 and 27 inches and weighs between 70 and 130lbs. Their color is large white with red, black, brown, or brindle patches. They have a deep and broad chest.

The Bulldog is a highly athletic dog and strong puppy. They have a wide frame with a thick tail, and their eyes are usually brown.

The Pitbull has a strong jaw, broad skull, and lean body. It can grow between 35 and 60lbs, meaning a lot less than the American bulldog. The Pittie is shorter than the Bulldog, hence, more athletic. They have a shiny coat that comes in colors such as red, blue, grey, and black.

As we said before, both the bulldog and the pit bull terrier are athletic breeds. They were once working dogs, meaning they have plenty of energy. They can definitely work all day.

Speaking of their exercise needs, they need at least one hour of exercise per day. The American bulldog cannot be your jogging buddy. The reason is they are prone to overheating, and even more if they have a short muzzle.

The Pittie on the other hand can be an excellent jogging buddy. Make sure to give them plenty of space to roam free, preferably in a fenced yard or dog park.

We also recommend scheduling some games that will exercise and tire your dog out.

Regarding intelligence, both of these breeds rank high on lists. But they have different types of intelligence and temperament.

The Bulldog is known for loyalty and obedience, while the pit bull is known for tenacity and strength. They are intelligent, with the Bulldog slightly easier to train. One of the reasons for that is that many people wrongly consider the pitbull more aggressive dog breed.

When it comes to training, these two are motivated by different things. For example, the American bulldog is food-motivated, while the Pittie is more play-motivated and affection-motivated.

You can definitely make a Pittie do everything if you pet him as a reward. Dog food and dog treat do not mean much to the pit bull terrier.

Both of these breeds need a dog owner who will be comfortable with being firm in the training. Because of its stubbornness, the American bulldog might need an experienced owner who will deal with his stubborn ways.

In the right hands, these two can do everything you want. They can perform dog agility, participate in dog sports, try some dog parkour, or just walk by your side calmly.

Socialization plays a huge role here. These two dogs have a bad reputation, so it is vastly important to socialize them before they cause an incident.

The Pittie, as we said before, is affection motivated. This is why crate training is important so that you can leave it alone. Otherwise, it might develop separation anxiety.

Being that they originate from the same dog breed, they have similar health problems. They are prone to hip dysplasia, elbow dysplasia, hypothyroidism, and demodectic mange.

And because of the shape of their muzzle, American bulldogs are also prone to breathing problems and cataracts. The APBT, on the other hand, is prone to skin allergies.

These breeds are considered hardy and healthy despite the potential ailments and health issues. Speaking of their life expectancy, the bulldog has a life expectancy between 10 to 16 years. The Pittbull can reach between 12 to 14 years.

When it comes to bite strength, these two are evenly matched. They produce bite force of about 235 pounds per square inch. It is five times stronger than the average human bite.

Do Pitbulls have a locking jaw?

This is one of the myths surrounding pitbulls. It is also one of the reasons why the dog has a bad reputation.

There is no difference in the shape, structure, or formation of the jaw of the pitbull compared to any other dog. They do not have a locking jaw or the ability to lock it.

They do, however, have a tendency to be determined. But this is a terrier thing. Every terrier holds onto things longer than other dog breeds.

Milo will not let go of something for minutes if you play with him. And he is a Jack Russell terrier. Does he have a locking jaw as well?

Now let’s talk for a moment about their bad reputation. If not treated correctly, or without proper training and socialization, any dog can react badly.

But neither the American Bulldog nor the Pitbull is a dangerous dog. Despite the negative press, they are not naturally aggressive towards people.

In fact, the pitbull is considered by some highly affectionate and loyal dog. Every Pittie owner will tell you, this dog loves to cuddle more than some Bichon Frise dogs and Maltese dogs.

Which dog breed is the right for you?

Whichever breed you choose, you should commit to providing them daily exercise, socialization, food, and exercise. Make sure your dog is happy and healthy.

Now, for the American Bulldog vs Pitbull debate. Both of these have their strong sides. You can get the Pitbull if you want a true exercise partner. The Bulldog is something you should get if you have more room to provide for roaming.

Being the smaller dog, the Pitbull is more suited for a smaller apartment.