American Staffordshire Terrier vs Pitbull – Are they Really the Same? 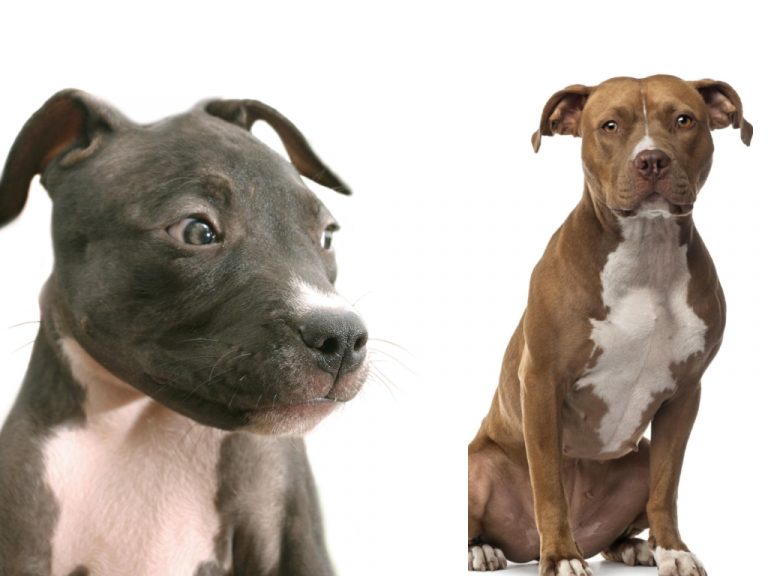 When you look at this breed comparison, you can instantly notice a major difference. And that is the size.

The appearance clearly suggests the PItbull terrier is the more athletic dog. But the Amstaff, or the American Staffordshire terrier is not far behind.

Do you want to get one of these two dog breeds as your next pet and family dog? Let’s talk about their similarities and differences.

First and foremost, we have to note that the American Kennel Club doesn’t recognize the Pitbull as an official dog breed. The Staffordshire Bull Terrier, on the other hand, is a recognized dog with a detailed dog breed standard. Nowadays, people use the word pitbull as a catch-all term for any bully dog breed they see.

Pitbulls are descended from terriers crossed with bulldogs with the goal of creating an agile and strong dog for fighting. The term pit bull itself is often used loosely to describe dogs that have been used for dog fighting. Historically, the Pitbull has been used for dogfighting and bullfighting.

Nowadays, dog fights are illegal, despite some dogs still being used in those. Staffordshire is a bit different. He is a descendant of mastiff and bulldog breeds, originally used for dogfighting and bullfighting. So, these dogs have somewhat different descendants, but the same original purpose.

Dog fighting was a sport where large dogs between 100 and 120lbs fought each other.

Both of these breeds have the word terrier in their name. It is a term that derives from the Latin word terra, meaning earth. This is why all terrier dogs were created to go into the ground and hunt vermin.

The goal of breeding terriers was to get dogs that would scare vermin out of their burrows so that the master could do the deed himself. Typically, terriers were small.

But in the 19th century, terriers were bred with bulldogs. The goal was to mix agility and muscle and get larger and more powerful dogs for the purpose of bull baiting and dogfighting.

In 1835, dog fighting was banned in England. But it continued in the United States, as immigrants took the cruel sport and their dogs across the Atlantic Ocean.

This is how the Pitbull and the Am Staff were born. American dogfighters wanted bigger and more powerful dogs than the original fighting dogs from England.

As we said before, the pitbull is not a breed officially recognized by the American Kennel Club. But the United Kennel Club recognized the Pitbull as their first dog in 1898. And they allow the Am Staff to be registered as American Pitbull terrier. The AKC, on the other hand, recognizes the American Staffordshire terrier, but not the Pitbull.

Overview of the breed

The best description of the American Staffordshire terrier is a medium-sized muscular dog with a playful and loving character. Despite the bad reputation, the Amstaff is a loving, loyal, and friendly dog.

The Pitbull receives its fair share of a bad reputation as well. People often have an incorrect assumption about this gentle breed. Many consider it aggressive and dangerous, but that is not the case. A Pit Bull will bring so much joy to your life.

Now let’s talk more about the American Staffordshire Terrier vs Pitbull dog breed comparison. Many of their differences are in appearance and size.

Speaking of the size comparison, it is one of the most noticeable differences. Staffies grow between 17 to 20 inches in height and weigh between 40 and 70lbs.

Pitbulls, on the other hand, grow taller, up to 20 inches, but lighter in weight, up to 60lbs at max, and usually between 45 and 50lbs. As with most dogs, males tend to be larger than females.

Their build is similar, with both terrier dog breeds having a strong and muscular build. Yet, pitbulls are leaner and more muscular, and well-proportioned. Pitbulls have short and muscular tail. Many people say their tail looks like a whip. Staffies, on the other hand, have a stocky and muscular build, with a particularly wide and muscular chest.

Their face is different as well. American Staffy has a more rounded head, one that is short but broad. Pitbulls have a slightly rounded face with high-set ears, and nose slightly tapered upwards.

Their coat comes in different colors. American Pit Bull terriers have a coat that is any color or pattern. One that is rare is the blue nose Pitbull. Staffies have a solid color coat, usually black, fawn, red, or brindle.

You can say that the personality breed comparison between American Staffordshire terrier vs Pitbull is non-existent.

Both of these dogs have a bad reputation, despite their loving personality. You can describe a Staffy by saying he is friendly. This affectionate dog breed loves family members, it is amazing with children and shows friendliness towards strangers.

Yes, the Staffy is protective, but with proper socialization, you can easily solve that issue.

The Pitbull is friendly and engaging, and he shows it with children and adults. The Pitbull will shower you with affection and enjoys cuddles more than anything in the world. You can pet them the whole day. One downside, their needy nature, and craving for affection might cause separation anxiety. Do not leave them alone for long periods.

Socialization will help your Pitbull puppy be friendly with other dogs.

Let’s talk about some training now. Which breed is easier to train?

The American Staffordshire terrier is intelligent and eager to please, making it easy to train. Because of its intelligence, he will respond great to training that ends with a reward, usually a tasty dog treat or dog food.

Staffies enjoy their daily exercise, but a brief walk of 30 minutes will do it. That will also help the puppy maintain a healthy weight. If you play some games, make sure the dog toys are durable.

Pitbulls are more agile and sporty. They need a bit more exercise to get them tired. But the good news is that pitties love to play fetch and similar games. Tug-of-war is also a good game to try, as long as you have toys that will not be destroyed easily.

If you do not provide enough exercise for your Pitbull, it might chew on items around the house.

When it comes to health, then it is a clear choice between the two. The American Staffy is the healthier dog breed. They are prone to some minor health issues like elbow dysplasia, but that is it. The bigger challenge is weight. Because of their stocky build, they are prone to weight gain, so be careful with the way you feed your puppy.

The Pit Bull Terrier, however, is a hardy canine prone to genetic conditions. For example, kneecap dislocation and hip dysplasia are common. The breed is also prone to skin issues.

Do they have a locking jaw?

Now let’s move on to some of the frequently asked questions about these dog breeds. One of the many misconceptions and myths is that these dog breeds, the pitbull mainly, have a locking jaw. But that is only a myth.

These dogs do not have the ability to lock their jaw. But they do have a strong bite and tendency to be determined. That means they hold onto things longer than other dogs. This is where the locking jaw myth comes from.

The Pitbull dog breed receives a lot of negative press, but it is not a dangerous dog. Instead, they are friendly, and not naturally aggressive toward people.

The Pitbull is one of the most highly affectionate and loyal dog breeds. Now, if the owner encourages dog aggression, we have a different story. That is where the bad reputation for the American pit bull terriers comes from.

The AmStaff also has a bad reputation, mainly because of the confusion between pitties and staffies. Of course, the association to bullfighting and dog fighting doesn’t help.

The Staffordshire terrier has a higher bite force than a pitbull, but he is not a dangerous dog. It is the upbringing that can make them dangerous.

Which is the better breed for you?

This can be a difficult choice. There are good points on both sides of the American Staffordshire terrier vs Pitbull dilemma.

If you have another animal at home, a Staffy is a better choice. And if you want a more agile and sporty breed, one that will suit your active lifestyle, the Pitbull might be better.

But if you are away from home for a while, then be careful what you choose. At the end of the day, you want a puppy that is suited to your lifestyle and environment.