People often think of the Anatolian shepherd as Kangal. But that is the same dog breed. Both of these have been used to protect livestock and farms against everything thrown at them. That can range from wolves, wild animals, buffalo, cheetahs, to humans. We have to talk about the Anatolian Shepherd vs Kangal debate.

Which breed is a better guard dog? These canines trace their lineage as far back as the Bronze Age. These Turkish dogs have an impressive presence. Combine that with their sharp mind and independent personality, and you have an ideal livestock guardian dog.

In the past few years, the Anatolian Shepherd dog has gained popularity as a family dog as well. But if you are not an experienced dog owner, look elsewhere.

Speaking of the Anatolian Shepherd vs Kangal debate, these two might look similar, but they have many differences between them.

What are these differences? Let’s take a look. 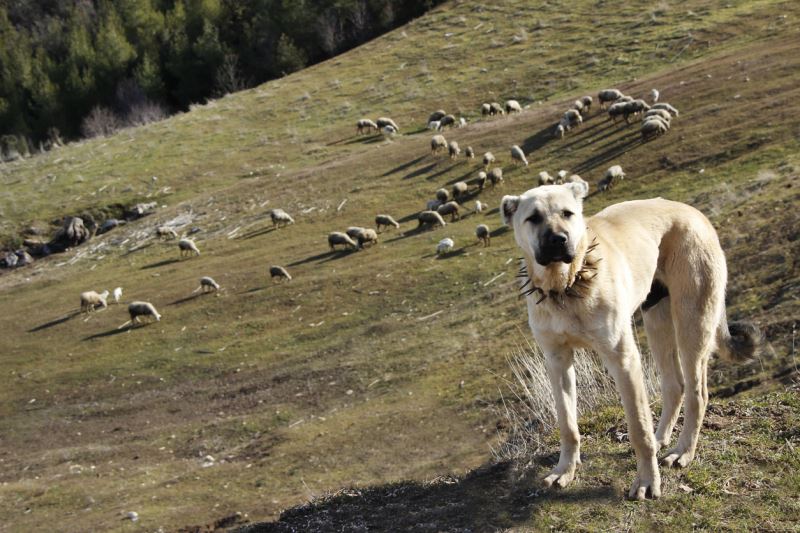 The first thing we need to look at is breed history. When you look at the history of a canine, you understand that particular dog breed and its original purpose. You will also understand what you can expect from these dogs, their temperament, personality traits, and more.

According to historians, the Turkish Kangal and Anatolian Shepherd descended from ancestors of modern Molossoid type-dogs. Those Molossoid dogs date back to 2,000 BC, back to the Bronze Age.

In 2018, the Federation Cynologique Internationale, which is the combined registry for mainland Europe, declared that the breeds are similar. They are now both under the name Kangal Shepherd Dog.

Speaking of their history, they originate from Turkey, which is why you often hear the name Turkish Kangal Dog or Turkish Shepherd Dog.

They were bred to protect livestock without little or no human supervision. As such, these dogs are capable of fighting wolves, bears, jackals, and everything else. They are also capable of sourcing their food.

Because the central part of Turkey is called Anatolia, the dogs were called Anatolian Shepherds. The name Kangal derives from a specific area in Turkey, the Kangal District where you mainly find this Turkish Shepherd Dog.

The American Kennel Club says that a pair of Anatolian shepherds were imported into the United States of America just before World War II. They were imported to participate in the top-secret “Sheepdog Project”. The mission wanted to discover which breeds are best suited for the needs of American pasturelands and ranchers.

Because the nature of Kangals and Anatolian shepherds is to intimidate predators rather than fight them and kill them, they were considered the ideal option for ranchers.

Nowadays, the exportation of purebred Kangals is forbidden in Turkey.

When we talk about Anatolian Shepherd vs Kangal breed comparison, we have to mention their purebred status.

There is much debate about this. Why? Because The American Kennel Club recognizes the Anatolian shepherd as a purebred dog, and they acknowledge Kangal as the same as the Anatolian Shepherd. That means Kangals are not considered a pure breed. 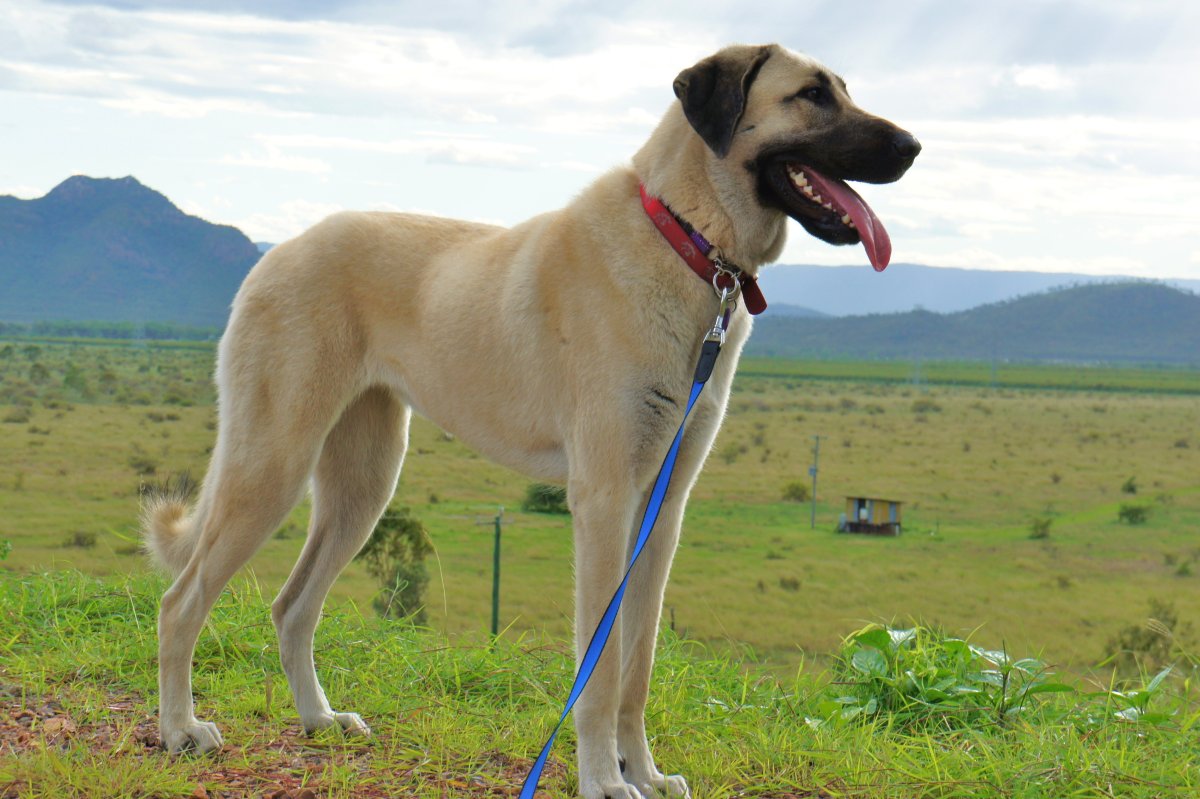 The best way to differentiate these two is to look at their physical appearance. With that in mind, let’s talk about appearance breed comparison.

But the size and weight are often too subtle for regular owners to notice. A professional dog owner and breeder will notice that difference.

Because Kangals are extremely prized in Turkey, they have specific colors and appearance. Unlike Kangals, Anatolian shepherds can be found in a wide variety of colors. Kangals, on the other hand, have a strict and specific brown shade and facial colorings.

The coat texture is also different. Anatolian Shepherd puppy has more fur around the neck and a longer coat in general. Kangals have short coats.

We talked about the history of these dogs. Now let’s see how it influences their temperament.

Anatolian Shepherd is a protective, loyal, and stubborn dog. He is the ideal livestock guardian dog.

These dogs are intelligent and smart enough to think for themselves. But they are also dominant and self-reliant, making them difficult to train. This dog is not a friendly breed. That applies even more to strangers. Serious and reserved, he is not overly aggressive.

As a family dog, the Anatolian shepherd is affectionate with humans, including children.

Kangals were bred to be calm, peaceful, and loyal. They are gentle with humans in the family but protective against strangers and unknowns. Kangals were also bred to be trustworthy around sheep and livestock.

Their temperament is alert and protective without being aggressive. They can guard against large predators, but they are gentle with the family.

One downside is that Kangals can be noisy. They bark to intimidate predators. Their barks are loud and booming. In some cases, that bark might sound like a roar. 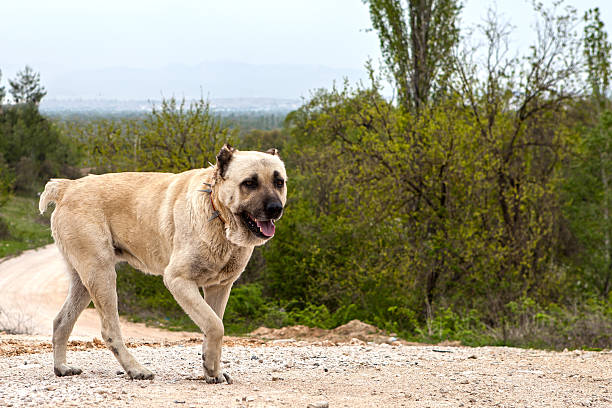 If you own any of these guardian dogs as a pet, you have to understand they are active breeds. But the good news is they do not need to be walked much like other breeds. They are always on the go in the form of protecting the home.

That means they are self-exercising. Patrolling the yard is all the exercise these dogs need. That means if you do not have a large yard, you are in trouble. Do not consider these dogs if you live in an apartment.

We also have to note that the Anatolian Shepherd needs a bit more mental stimulation. This dog needs a job to do or something constructive. Otherwise, it might become destructive to the house and yard. Kangals are happy on their own patrolling the yard. But Anatolian Shepherds need a bit more tasks.

Do not expect to train this dog to sit or give a paw for a treat. These dogs are what they were bred to be. And that is a large dog guarding the home. They patrol and protect the family.

Both breeds have a dominant personality, making them unsuitable for inexperienced dog owners or average families.

Only an experienced trainer can handle this guardian dog. While they are not typical family pets, they still need to be socialized early on.

Mix them with as many dogs as possible and invite visitors. This way, these guardians will learn the difference between a friendly stranger and a potential danger.

They can live with other family pets, but they need to be raised alongside them from a puppy. As we said before, these dogs consider the whole family something they need to protect. And that includes other animals like livestock.

One of the reasons why these dogs have a bad reputation nowadays and are used in illegal dog fights is their strong bite force. The Turkish Kangal is the strongest dog with a bite force of 743 PSI. You have to remember, this dog was bred to protect sheep from predators. And they need a strong jaw to fight against wolves and bears.

The Anatolian Shepherd has a slightly lower bite force, yet is still strong enough to fight predators at 700 PSI.

Speaking of health, these two breeds are extremely large. As such, they are susceptible to hip dysplasia and elbow dysplasia.

You need to get them from a reputable breeder to ensure a healthy dog. 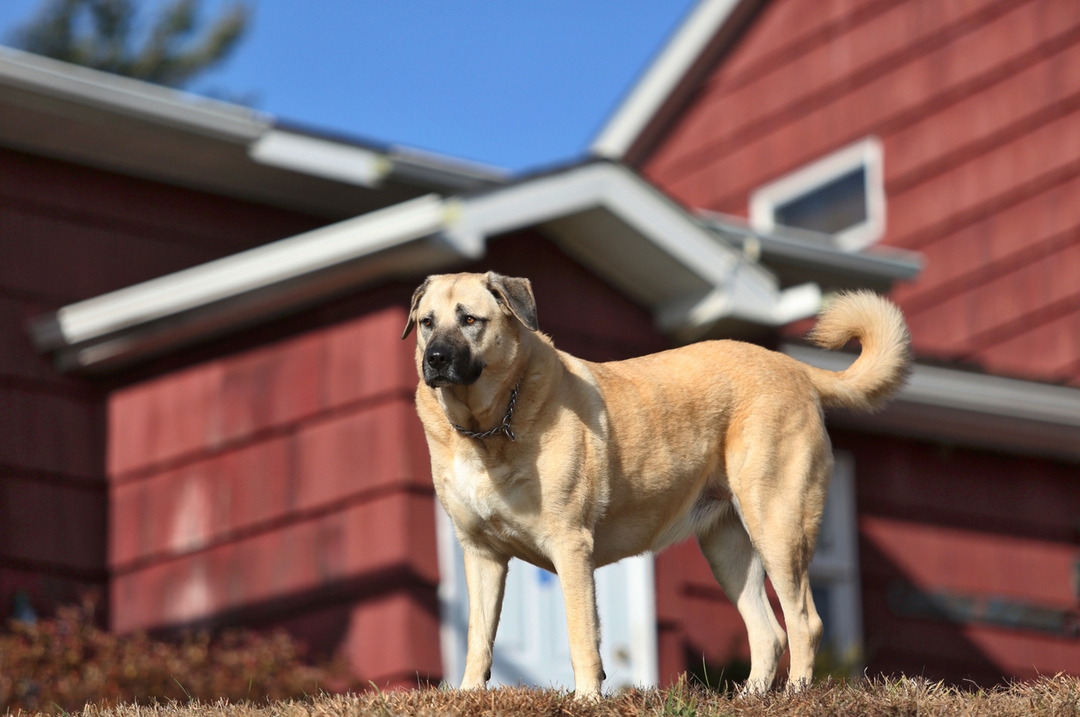 You will be surprised, but these two gigantic dogs live quite a long life. Yes, they are susceptible to several health issues, but they live over 10 years.

One thing you have to take into account is the rarity of the Kangal. It is forbidden to export them out of Turkey, and that makes them hard to find. They tend to cost more than a regular Anatolian shepherd.

You have to consider your options when choosing one of the two. If you can provide a bit more mental stimulation, Anatolian shepherd is a great guardian dog.

But if you want a dog that will be able to do everything on its own, the Kangal is the best protector you can find. Anatolian shepherds are more aggressive toward other animals.

Whatever you choose, you have to set the limits of the property these dogs are patrolling. Otherwise, they can continue to roam in places you do not want them to be. Consider placing a high fence!