Blue French Bulldog – What is so Special and Unusual About This Dog? 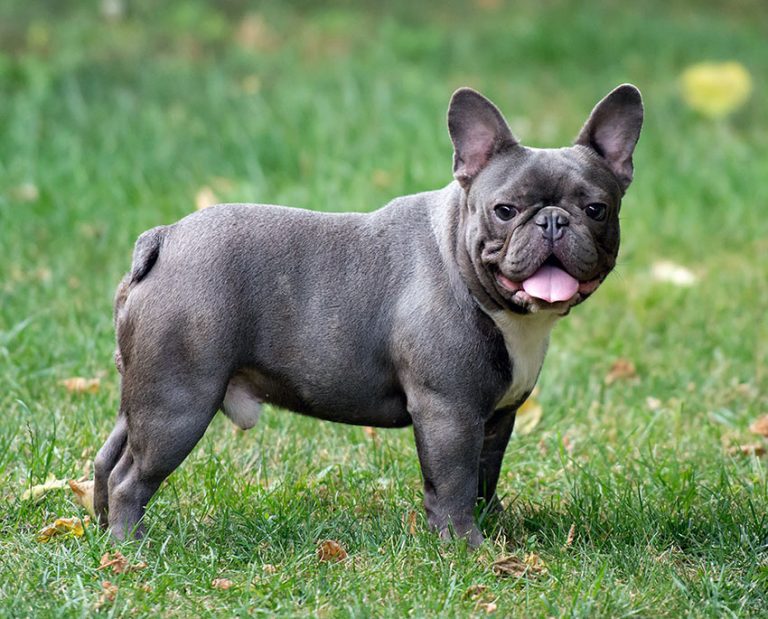 Cute, cuddly, and charming Frenchies have become one of the most popular dog breeds you can find. French Bulldogs on their own are expensive dogs. But when you ask for a special trait or characteristic, the price goes even higher. Take the blue French bulldog for example. This dog has a price that goes two or three times the regular French bulldog.

Being the fourth most popular dog breed in the United States certainly helps. The Frenchie has gone a long way since being bred originally in England in the 1800s. When French lacemakers relocated to Nottingham, they brought their toy bulldogs with them. Over the years, breeding resulted in a dog known as the French bulldog.

What is the difference between regular and blue French bulldog?

With that in mind, you can expect some health issues due to the breeding, but more on that later. In general, the blue French bulldog is a very small dog that is affectionate, needy, and cuddly.

Known as silly dogs and clowns of the dog world, the Frenchies are known to breathe loudly. They also exhibit some funny habits. In terms of health, they are known to get sick more often than other dogs.

While the Frenchie is a small dog, it is actually a very masculine dog, unlike other small breeds. Very friendly, the French bulldog craves affection and attention from anyone.

What causes the Blue color?

The blue color in your Frenchie is caused by a recessive gene. What sets apart this dog is a single gene in the DNA.

The recessive gene is known as the dilution gene. In many canines, this gene might not be a preferable trait. Yet, when it comes to a French Bulldog puppy, blue is a color that a dog owner might want.

Why? Because it makes their puppy unique. The breed standard set by the American Kennel club doesn’t recognize the blue color. Yet, these Frenchies are twice as expensive. That is because a dog lover might want a dog that is considered a status symbol.

What are the blue colors?

Is the Blue Frenchie recognized?

In terms of AKC recognition, the blue Frenchie is not considered a separate or specific breed. If you want to compete, you cannot register your dog, as they are not allowed to enter into any competitions because of the coloring.

While the French bulldog is considered as a show dog and recognized as such, the blue coloration disallows the dog to compete in shows.

French bulldogs allowed into the competition are those with the color palettes white, fawn, brindle, and a combination of white and brindle. If one has a blue color to its fur, it is considered a fake French bulldog.

However, all of this matters only if you are interested in competition and showing your French bulldog. If you want to keep him at home and enjoy his company, there is no hurdle. You can even have a Blue fawn Frenchie.

The reason why the American Kennel Club and other organizations do not recognize the blue Frenchy is that the breed is prone to many health problems. It is widely believed they suffer from a condition called blue dog alopecia, which is a known discoloration. The reality is that not all blue Frenchies are affected by the condition.

The temperament of the breed

The French bulldog, in general, is not considered an active breed. Truth be told, they are not particularly active. If you are not an active person, that is good news. Your dog will not need much activity to be happy or healthy.

Your dog will be happy enough napping in the home on the couch or his spot, or relaxing on your lap. Be careful, they can be prone to obesity, as the Frenchie can eat everything you throw at them. And at the same time, being not that much active, obesity and weight can be a problem.

Short walks through the day or letting them into the yard to roam for a few minutes is more than enough to keep your puppy happy and satisfied. Usually, Frenchies go right back home as they finish with their duties.

French Bulldogs have only one coat. That means your puppy will get very cold easily. After all, the French bulldog dog breed is considered an indoor puppy. Many owners prefer not to let them outside during the winter, and let their puppies do their duties on a doggie diaper at home. Or put a sweater on them during the winter months.

When it is cold, this dog is more likely to spend time home cuddling close to a blanket or with a human for some extra warmth. During the winter, you should also provide extra coverage if you live in a cold area. Be careful, or your puppy might get sick.

Because of their size, particularly of the head, French bulldogs are rarely born naturally. In fact, in most cases, breeders do not want the mother to suffer any damage to her body or health by giving birth to a dog with a large head. That is why breeders often schedule a C-section for their puppy when it is time to deliver.

The damage done to the body by natural birth is not fixable. You will rarely find a French bulldog that was born naturally and without the help of a veterinarian. Those vet expenses pile up on the price of a blue French bulldog.

The downside of owning a blue French bulldog

We mentioned earlier that there are some severe health concerns when it comes to owning a blue Frenchie. The blue color is one of the biggest trends of all for Frenchies. There are breeders that bred blue dogs on purpose. They are looking for that specific gene. And it is understandable, given the high price people pay for a blue puppy.

In fact, there are waiting lists for puppies of this breed. Mothers usually give birth to one or two babies, at max three puppies per litter.

Because of the blue gen, the color tends to produce yellow or green-eyed dogs, which can often lead to blindness.

The blue color also carries a genetic disorder that can cause dry, scaly skin or even hair loss. You might not notice the symptoms in a puppy, but as your dog gets older, the problem will develop.

Healthy dogs live longer in general, and owning a blue Frenchie will come with its own price. Not only the high price tag, but also shorter life span, and more expensive vet bills.

The price for a French bulldog nowadays is $2,000 on average. For blue French puppies, you can expect to pay anywhere between $1,500 and $3,000. But the price will increase if your puppy comes from an exceptional breeding line. Prices for top quality dogs can go as high as $10,000.

And in general, the blue Frenchie is at least two times more expensive than a regular Frenchie.

Why should you get a blue French bulldog?

With all the talk about health concerns, price concerns, and being recognized as a breed, the blue French is, after all, a one-of-a-kind dog. Their wrinkly face, combined with the short nose, adorable ears, and unique color, definitely is appealing.

And in the end, you are getting a dog that has a heart of gold. Affectionate, friendly, loving, fun, and joy to be around. And last, but not least, the Frenchie is quite adaptable and easy going. They get along with almost anyone and can adapt to different homes.