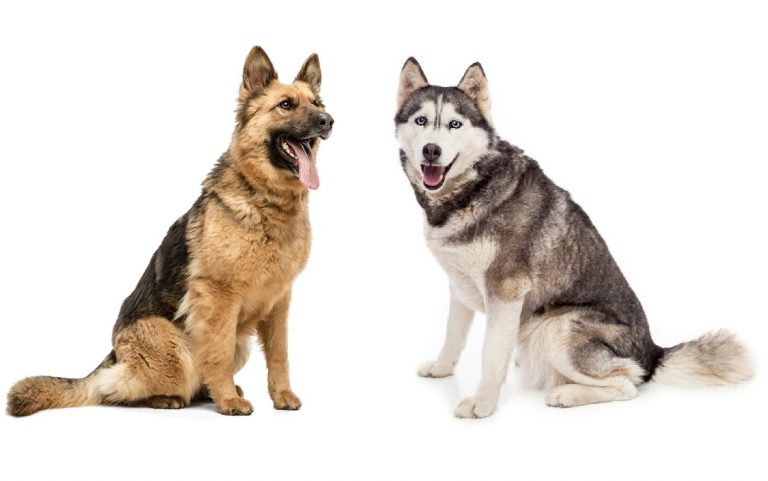 Let’s take a look into the German Shepherd and Husky comparison. As we said in the intro, they come from different professions. Looking at breed history, you can easily understand where your canine comes from, what shapes its temperament, and how to properly handle it.

Decades of breeding herding breeds resulted in this amazing working breed. The German Shepherd is praised for its versatility. He was once a herding dog, but he can fit any role. During World War I, for example, he delivered supplies to soldiers.

His popularity rose thanks to movies and television shows. And the fact he can fit any role, be it guard dog, police dog, companion dog, family pet, or anything in between, also helps.

The Siberian Husky is also a working breed. It is one of the oldest dogs in the world, developed by the Chukchi Tribe in Russia. Initially, the breed was bred to haul light roads quickly over icy terrain.

Over the years, people have fallen in love with the Husky breed because of its beautiful looks. Who can resist those blue eyes and silky smooth coat?

Nowadays, the Husky is more of a family dog than a sled dog.

When you look at the German Shepherd versus Husky comparison, you can quickly notice the visual differences. These two are quite different. For starters, they come in different colors.

German Shepherd dogs are noble-looking puppies, they have long and dark muzzle, intelligent eyes, and large ears pointed and standing up. German Shepherds can have floppy ears when they are puppies, but as they age, their ears point and stand up. That gives them a more serious look.

Huskies can also have erect ears and bushy fur. For them, the purpose is to protect them from the cold. What makes Huskies beautiful is their intense eyes. While most people think Huskies come only with blue eyes, their eyes can also be brown, particolored, or a combination of two colors.

Both dog breeds have a double coat, with Huskies looking fluffier because of their thick undercoat.

Now, what is the coat color of these dogs?

According to The American Kennel Club, black and tan is the most common coat color of German Shepherd. But these canines also appear in sable, black, liver, white, and blue.

The Husky can appear in a variety of shades and patterns, with the standard coat combination white, with some black, grey, red, or sable. 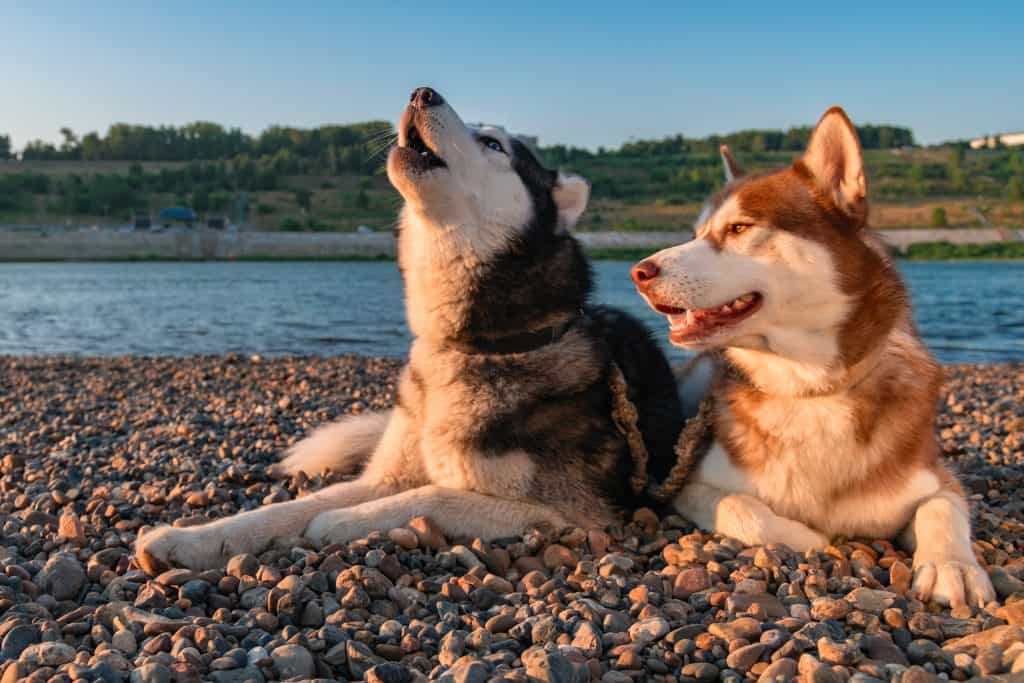 When you talk of temperament differences, you have to look at breed history. We mentioned before that can help us understand our dog breed, right? Both of these dogs make good family dogs, but you have to take into consideration their instinct.

The German Shepherd was bred to be a herding dog, but he is also one of the best guard dog breeds. This puppy is always on alert and will tell you if someone is lurking. They do bark to communicate about possible dangers.

Huskies, on the other hand, do not bark. Yet, do not mistake them for a quiet puppy. Instead, Huskies are quite talkative, but they howl, sing, and talk to their owners.

Of the two, the Husky is the more stubborn pet. They are a bit more independent and are known to run away when they do not get their wish. This is why you see most Huskies on a leash during walks.

German Shepherds are people pleasers. They were bred to be obedient. And because of their amazing obedience, they are used as police dogs.

Another thing to note, both of these dogs need to be with their family for the majority of the day. Yes, the German Shepherd is a good guard dog, but he enjoys the company of his people. Both breeds are prone to suffering from separation anxiety.

If you do not provide enough stimulation, physical and mental, they can be destructive. And you do not want a big destructive puppy, don’t you? 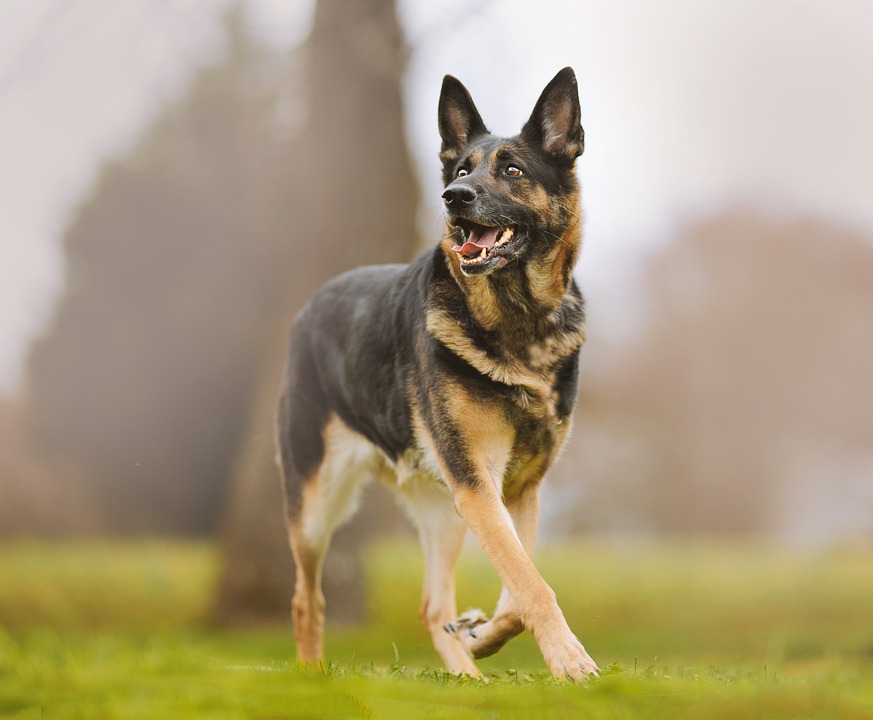 Of the two, the Husky is more independent and stubborn. This dog does not enjoy training as much as the German Shepherd. Huskies would rather play and show off their silly antics instead of training. This is why you need to implement a variety of games to keep your Husky interested in training. Fair warning for prospective dog owners: Huskies are great escape artists.

The German Shepherd is one of the easiest breeds to train. They can fit any service job, and it is in their blood and instinct to be obedient and please you.

Yet, even a German Shepherd needs a consistent trainer and owner. The Husky is highly intelligent and headstrong, so they need firm and proper training to reach their full potential. You need to clearly show you are in charge. Remember, the Husky is the prototypical pack dog.

With both breeds, proper and early socialization is a must.

When you compare German Shepherd versus Husky exercise needs, the Husky clearly wins. They need at least 90 minutes of physical and mental exercise per day. Their exercise needs and levels are high.

German Shepherds also have high energy needs. They are natural-born marathoners and can run and walk long distances with you. If you want a companion dog for jogging or hiking, get a German Shepherd.

Huskies can hike with you as well, but their natural instinct to run away, escape, or disappear, makes them less reliable in the mountains.

Both of these dogs can jump high, so ensure you have an enclosed environment. And if you want to burn your Husky, play some games.

You can burn your German Shepherd’s energy by training.

Both of these breeds are notorious shedders. But they have different shedding patterns. Remember, they have a double coat that will protect them in cold climates.

Huskies shed in the spring and autumn, but they tend to shed less in cooler climates. The good news is they do not omit a lot of odor.

The German Shepherd dog breed sheds to the point it has gotten the nickname German Shedder. They shed all year round. Be prepared to vacuum a lot and have your clothes covered in fur. 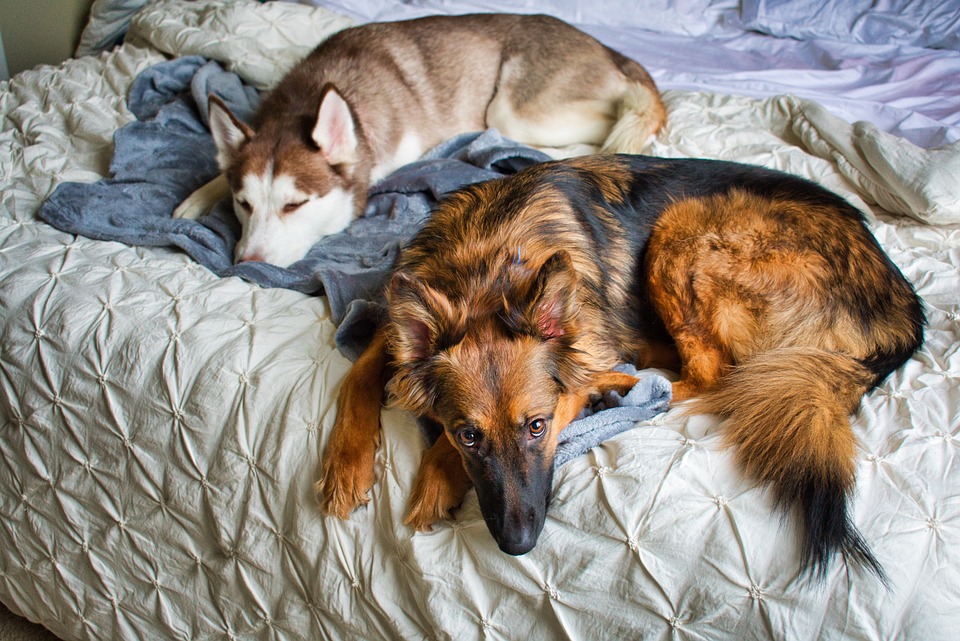 It is worth noting that one of these canines is part of the group of dog breeds your vet says to avoid. That would be the German Shepherd dog. Why? Because they are prone to so many health issues and have a low life expectancy.

Huskies are the healthier breed, and they suffer from the usual hip dysplasia and eye issues.

Which Is The Better Family Pet?

Both of these dogs make great family pets. They are amazing with children and can tolerate other dogs in the home as well. With a German Shepherd, you can even have a cat in the household. German Shepherds consider every member of the family someone they need to protect. That expands to children and other animals.

Huskies do not do well with smaller animals, because of their strong prey drive and instincts to chase cats, rabbits, squirrels, and more. Yet, if raised with small animals as puppies, they will do fine.

If you cannot decide between the two, you can always get a German Shepherd Husky mix. This dog is known as the Gerberian Shepsky.

Of the two, it really comes down to preferences. Huskies are more aloof and friendlier with strangers. They do not bark, but their howling can be irritating. Yet, they are also the more stubborn breed.

With a German Shepherd, you have an obedient dog that will protect you from every situation