Do Huskies Bark? Or Do They Howl? 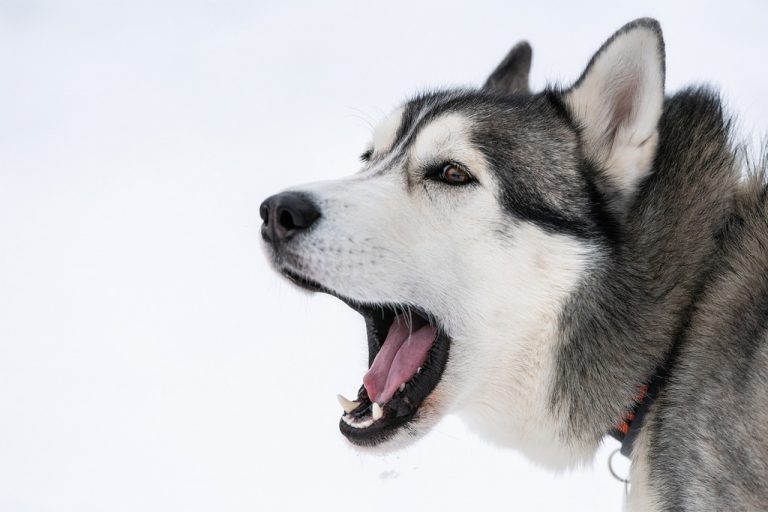 Every dog owner wants to know the “loudness of their dog”. For future husky owners, that question is do huskies bark? Do huskies howl? How often do they do it? Can you do something about it? Well, we are here to try and answer your questions.

Siberian huskies can bark and howl. But the good news is that most of them do it rarely or never. Barking is a territorial call. And huskies, even though they look like wolves, are almost non-territorial. When huskies bark, they do it as an invitation to play.

Huskies do however howl, thanks to their wolf instinct. They also make funny and interesting growling noises as a way of communication.

With that in mind, barking is rarely a husky problem. That is why most experts consider huskies awful guard dogs. They rarely bark at strangers. If you plan to get a husky as a guard dog, think twice. They will more likely go and play with the stranger than bark at him.

According to the American Kennel Club, Huskies are part of the working dog breed group. Back in the day, this canine was used as a sled dog.

Nowadays, you will hardly find a Husky puppy being used for sled work. But these canines have maintained some of their instincts.

They have remained independent, stubborn, playful, friendly, and intelligent dogs.

And while they are still very much vocal, they do not use excessive barking as their form of communication. Instead, they use howling.

Why do huskies rarely bark?

To understand huskies and their barking, you have to understand the breed in general. And barking as well. Barking is a type of vocal communication dogs can use. Different breeds do it for different reasons.

For example, most dogs bark for territorial reasons. But huskies are unique in that way. They are not a territorial breed. So, they have no reason to bark to alert owners of potential intruders and strangers.

We said before, huskies are terrible guard dogs. They do not have the instinct to bark when a stranger approaches.

Other dogs use barking to show affection or when they get excited. They also bark when they want to get the toy or cry for attention. This is when huskies might bark, as they get excited to see you. But in most cases, huskies will more likely run around like crazy.

As for attention, most huskies whine or howl. They do not bark to get your attention. They tend to use different ways of communication.

What to do with a barking husky?

We said excessive barking is rarely a problem for a Siberian Husky dog breed. They almost never bark. But sometimes, owners complain about huskies barking. Well, in that case, you have to find the root of the problem.

Most probably, you have a husky suffering from stress, loneliness, or anxiety. Without proper training, your husky will voice his opinion. Huskies might bark when you leave them home without previous and proper training.

And if your husky gets bored and doesn’t get exercise, he will voice his opinion as well. Huskies need a lot of fun and exercise. Barking is their way to tell you “let’s go outside”.

You can solve boredom barking with some proper exercise and games at home. For example, consider indoor dog parkour games. Or some mental exercise games at home.

Remember, there is nothing wrong with a husky that barks. But it is an uncommon sight. Howling and talking are usual ways of communication. And at the end of the day, every husky has its own personality.

Can you train your husky to bark?

Well, this is a hard thing to do. Fun fact: most owners would prefer their dogs to not bark. And some husky owners want their dog to bark.

Yes, you can train your dog to “speak”. And while most dogs will bark at the command, huskies will probably don’t. They would more likely howl or use some other form of communication.

If you do not have a barking or howling type of husky, you will hardly train him to bark. But there is nothing wrong with huskies not barking. That is just their way of living.

Can you stop a husky from barking?

If barking comes for no reason at all, you can easily train your husky to “shush”. But leaving your husky home or leaving him bored will most likely result in barking or howling. We do not, however, encourage trying to suppress his way of communication.

What we encourage is you try and relieve your dog from stress, anxiety, or boredom. Make sure to provide enough exercise and mental play for your dog.

Why do huskies howl?

While most huskies will not bark, they will howl. Now howl is another form of vocal communication. And hussies use it often.

Remember, huskies are among the most direct descendants of wolves. For wolves, it is normal to howl. The same applies to huskies as well. Wolves howl to communicate with each other and with the rest of the pack.

For wolves, the long-sustained howl is the best way to pinpoint the source of the sound. We have managed to domesticate huskies and make them home dogs. But they have kept their howling instincts. And they have evolved with howling as their main form of communication. They use it to this day.

Another common question among husky owners is whether their dog barks at strangers. Well, if you ask any Siberian Husky owner, they will give you simple answer, no. Huskies do not bark at strangers. They tend to act friendly around other people. Your husky will likely greet an intruder with a wagging tail. Huskies see each new stranger as a new friend they can play with.

And that applies even to people you pass on the sidewalk and people they meet for the first time. Huskies are great when you want to have guests coming over. Or if you want to take them to new places.

Think about it this way. A German shepherd will warn you about someone breaking into the house. Husky, on the other hand, will wag his tail and ask for belly rubs and scratches.

Huskies in the dog park

We said before that huskies do not bark. At least not often. But what happens when you go to the dog park and you see a husky barking?

Well, do not take it as a form of aggression. Instead, it is mostly a sign of play. Huskies wag their tail and scamper around other dogs when they bark. They try to invite them to play.

Other meanings of husky barking

Besides play with other dogs, huskies can rarely bark for other reasons. Here are a couple of barks you should pay attention to: