Miniature Poodle vs Toy Poodle – Can You Tell The Difference? 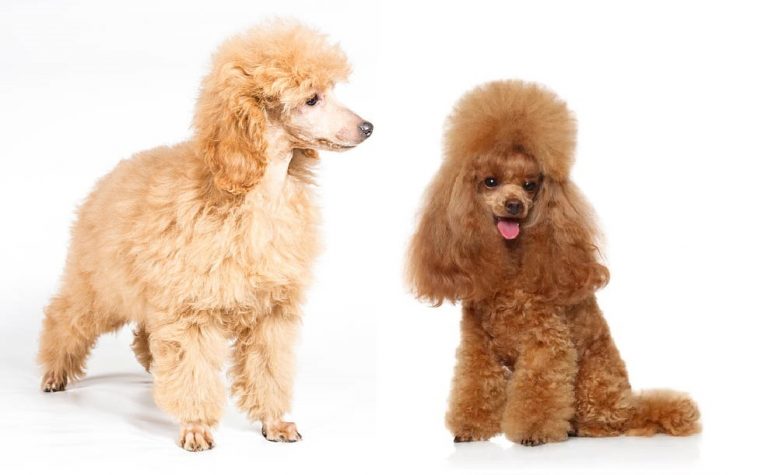 What many people do not know is that there are different types of Poodles. Today, we will look at the comparison between Miniature Poodles and Toy Poodles. What sets them apart? How to tell the difference?

Size is not the only difference. We can also look at their history, temperament, health conditions, and some other similarities and differences.

How Many Poodles Are There?

There are a few different types of Poodles, but some are more recognized than others. Considered the national dog of France, Poodle is actually from Germany. Their lineage begins there.

Their name, Pudelin, in German means “to splash about”. Back in the day, these animals worked as exceptional duck-hunting and water-retrieving dogs.

The Poodle Club of America follows guidelines by The American Kennel Club and recognizes three primary types of Poodles.

Listed from smallest to largest, those are Toy Poodle, Miniature Poodle, and Standard Poodle. In France, you can also find the Moyen Poodle, a French word for Medium, or Klein Poodle, a dog recognized by the kennel clubs in Great Britain and Canada.

Teacup Poodle is another toy breed, but it is not recognized by The American Kennel Club. There are also a lot of Poodle mix dogs, called doodles. For example, Goldendoodle a mix of Golden Retriever and Poodle, or Maltipoo, a Poodle mix with Maltese.

Who Are The Three Types Of Poodles? 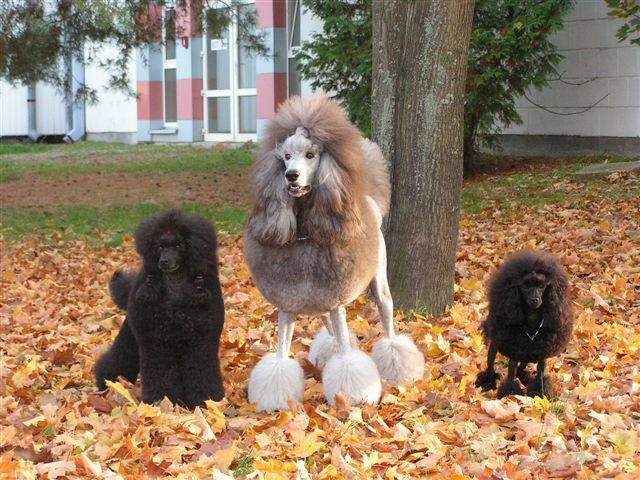 Let’s focus on the three main Poodle breed dogs recognized by The American Kennel Club. These cuddle companions owe their popularity to the 18th-century aristocracy in France. The smart Toy Poodle puppy is an adorable version of the classic dog breed. Perfect cuddle companions for seniors and children, these dogs are happy being out and about with their owners.

The Miniature Poodle is a canine that is happy to be a lap dog. Similar to most Poodles, they have signature charm, quick wit, and people-pleasing qualities.

Miniature Poodle dogs are amazing for people who suffer from allergies and want a low-shedding puppy.

Many believe this to be the first type of Poodle. Athletic and easy to train, this puppy enjoys vigorous activity.

You can play lots of retrieving games, but also try some activities like swimming, agility training, and dock diving.

But this larger Poodle also requires more grooming, because of its larger body. It will take more time to get the signature and fancy Poodle haircut.

Toy Poodles are smaller dogs compared to their counterparts. This elegant-looking tiny puppy is your perfect lap dog.

They still have the intelligence of the Poodle breed but in a smaller body. 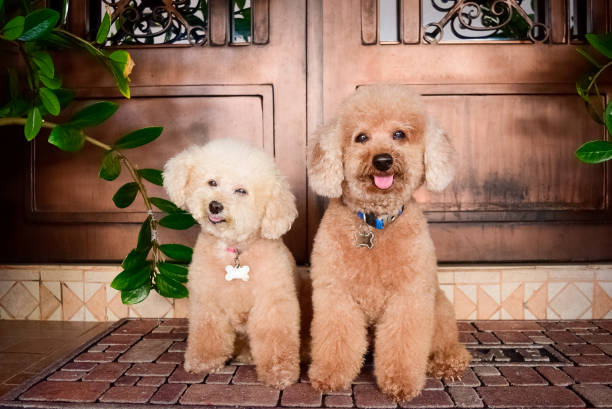 The Toy and Miniature Poodle variants have their history mixed with the history of the regular-size, Standard Poodle.

This old European breed dates back to Germany, where it was used for hunting and retrieving waterfowl. Eventually, these dogs became canine companions of the French nobility.

The Standard Poodle is the first, original version, and it was bred in the 15th century. But in the 18th century, Miniature Poodles became popular as companion dogs. It wasn’t until the 20th century that the Toy Poodle became a thing.

People in the United States living in smaller apartments wanted a small dog, hence, the Toy Poodle. And with the rise of celebrities, the toy version became a fancy accessory.

When it comes to the appearance comparison between these two, you can look at the size. Everything else is almost identical, as they both have the same curly coat and color variants.

The Miniature Poodle grows between 11 and 15 inches, while the Toy Poodle is smaller at only 10 inches.

If you think a smaller dog like Toy Poodle or Miniature Poodle is just a couch potato, think again. All three versions of the Poodle are active and intelligent dogs. They are famous for their calm nerves and hardy constitutions.

When treated as part of the family, they make a wonderful companion. These puppies are not aggressive and are fine living with children and other animals. Just be careful, because these are small dogs, and you have to teach your children proper handling and playing. You do not want kids stepping on the dog, right? 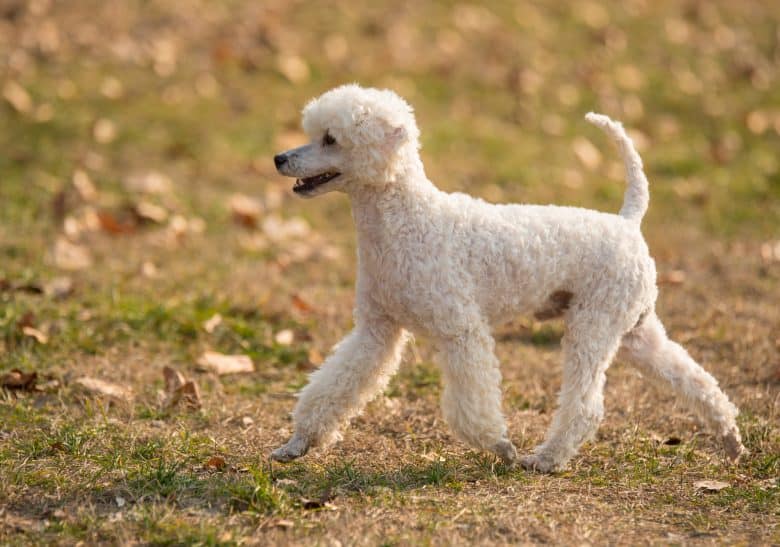 When you talk about Miniature Poodle versus Toy Poodle training, it is basically the same. Poodles are eager to please, quick to learn, and easy to train.

With Poodles, it is imperative that you provide plenty of physical exercise, mental stimulation, and games that will keep them interested. That is the key to successful training.

Socialization is important as well because these dogs are prone to separation anxiety. Do not leave them alone for long periods. Because of their natural instinct to be lap dogs and companion dogs, they do not want to spend time alone.

We said before that despite their size, these Poodles love to play, exercise, and train. They are not couch potatoes. They need plenty of physical exercise and mental stimulation.

Bear in mind, they were hunting dogs back in the day. They have a lot of energy. And in some cases, they can be livelier than the Standard Poodle.

Play games like fetch to burn their energy. They love any activity in which they are included. Do not assume they do not need much exercise just because they are small dogs.

They are dogs with high energy levels, and physical exercise will keep them happy and healthy. And playing games is a great way to bond with your Poodle puppy.

Poodles are generally healthy dog breeds. But the Miniature and Toy Poodle share some health concerns.

Both of them can suffer from luxating patellas, hip dysplasia, eye problems, cardiovascular diseases, muscular dystrophy, and similar problems.

Health testing, and getting your dog from a reputable breeder is a must to ensure healthy pets.

Both dogs are very healthy and can live a long and prosperous life. Toy Poodles live between 10 and 18 years. They might have problems like patellar luxation, Legg-calve Perthes disease, and collapsing trachea.

Miniature Poodles live between 10 and 18 years, with their health risks including epilepsy, progressive retinal atrophy, and Cushing’s disease. 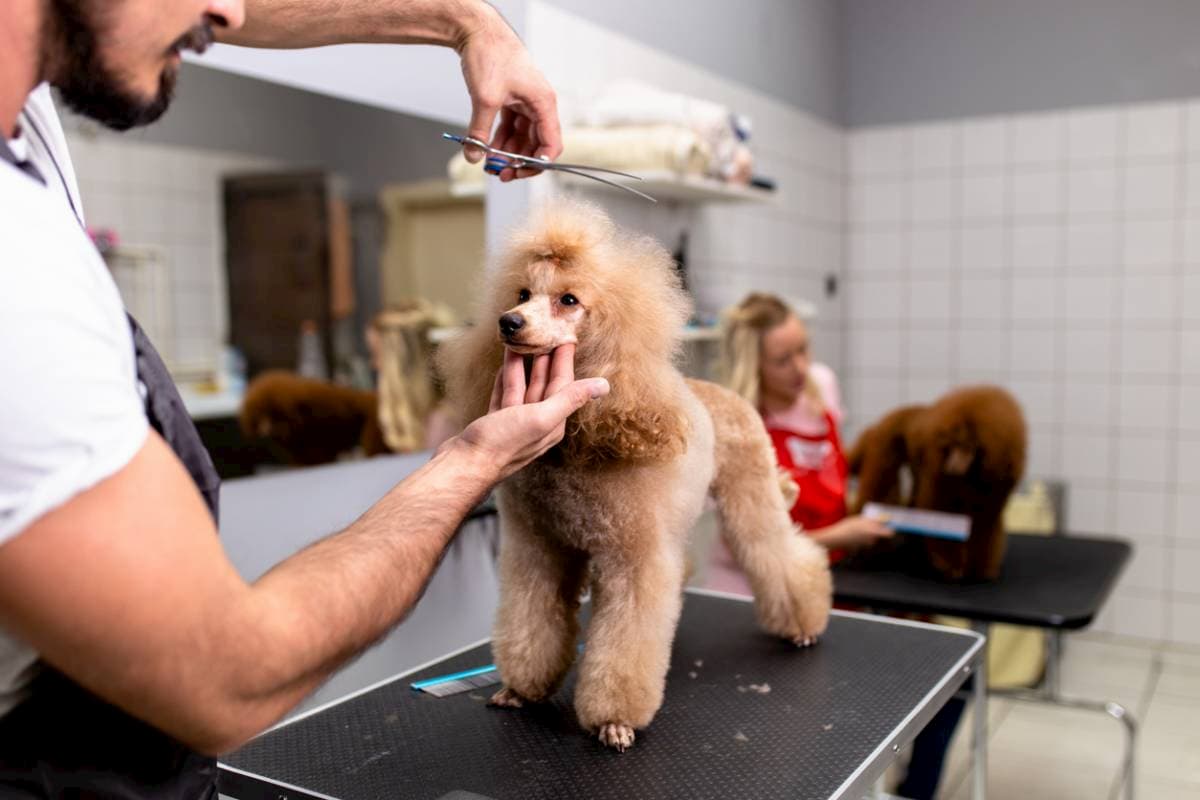 As we said before, Poodles are known for their signature haircut. But that means a lot of grooming. These dogs are hypoallergenic, meaning they do not shed or shed very little.

But they do need daily brushing, so make sure to groom your puppy regularly. Yes, some owners avoid brushing by clipping their dog’s fur short.

In any case, be ready to pay for frequent and regular visits to the groomer.

If you are trying to decide between a Miniature Poodle and a Toy Poodle, there is only one factor you need to consider.

And that is size. They are not separate breeds. There is no other difference between the two. The main question is whether you want a dog that is under 10 inches or above.