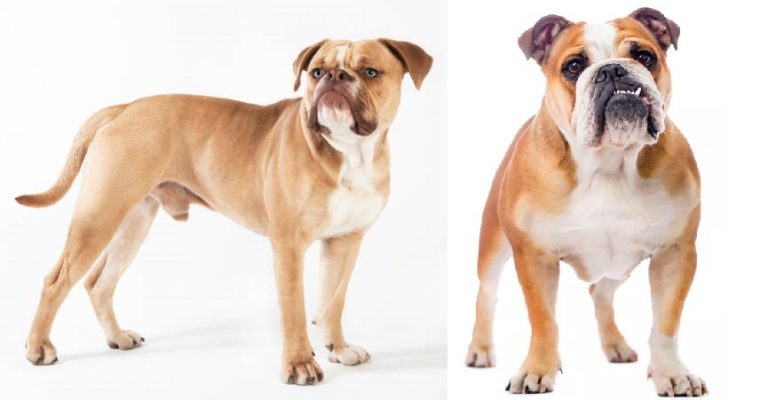 Well, the first and obvious one is that one is an extinct breed, and the other is among the most popular. Historians believe that the Old English Bulldog is derived from ancient war dogs. For example, the old Mastiff or the extinct Alaunt dog.

The Old English Bulldog was developed in England to be part of the English blood sport of bull baiting. This sport happened mostly in London. The locations for these exhibitions were the Westminster Pit, Beargarden, and Old Conduit Fields.

We will try to explain why Bulldogs are so stocky and have big and powerful heads. English Bulldogs were created in the 17th century by mixing the Old English Bulldog with some other animals like the Mastiff.

The goal was to create a dog for a gruesome purpose, and that was to participate in the gruesome sport of bullbaiting. During this barbaric activity, dogs would try to pull a bull down by its nose and pint it to the ground.

This is the reason Bulldogs nowadays are stocky and have big and powerful heads. That made it easier for them to bring a larger animal to the ground.

When bullbaiting perished, people actually fell in love with the dogs. They wanted the same traits that made them in dog fighting, but now they used them as pets.

Being Cute Is A Crime 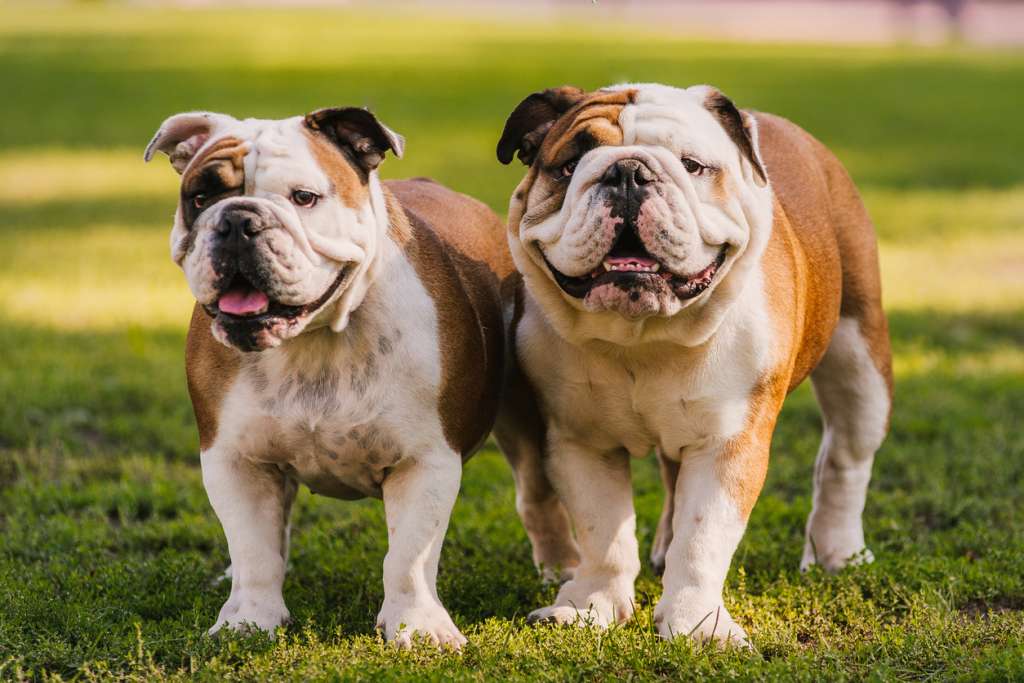 Bulldogs have been victims of their own cuteness. While people fell in love with the Bulldog breed, they loved some features and thought some of them would make a dog more adorable.

So, breeders began to perpetuate those features. The modern English Bulldog was bred to have a bigger head, stockier body, and shorter nose. And that is how the Bulldog became a brachycephalic breed.

Now, we cannot deny that it made them more adorable. After all, The American Kennel Club has them in the top 15 most popular dogs. But the stocky body caused the Bulldog to suffer from joint and spine issues.

Their head grew so large that many cannot give birth naturally. Their hips are too narrow to pass giant puppies. Nowadays, modern English Bulldog puppies are bred through in vitro fertilization.

The Birth Of Olde English Bulldog

David Leavitt was a Pennsylvania breeder who set out to create a dog that would keep most of the things we love about English Bulldogs. At the same time, he wanted to eliminate things that caused issues for these brachycephalic dogs.

To do that, he crossed regular English Bulldog with American Bulldog, Bull Mastiff, and some other breeds.

The result was the Olde English Bulldogge, a dog that is quite rare. Only a few breeders in the US are devoted to making them.

They are not recognized by the AKC, but the United Kennel Club officially recognized the breed in 2014. 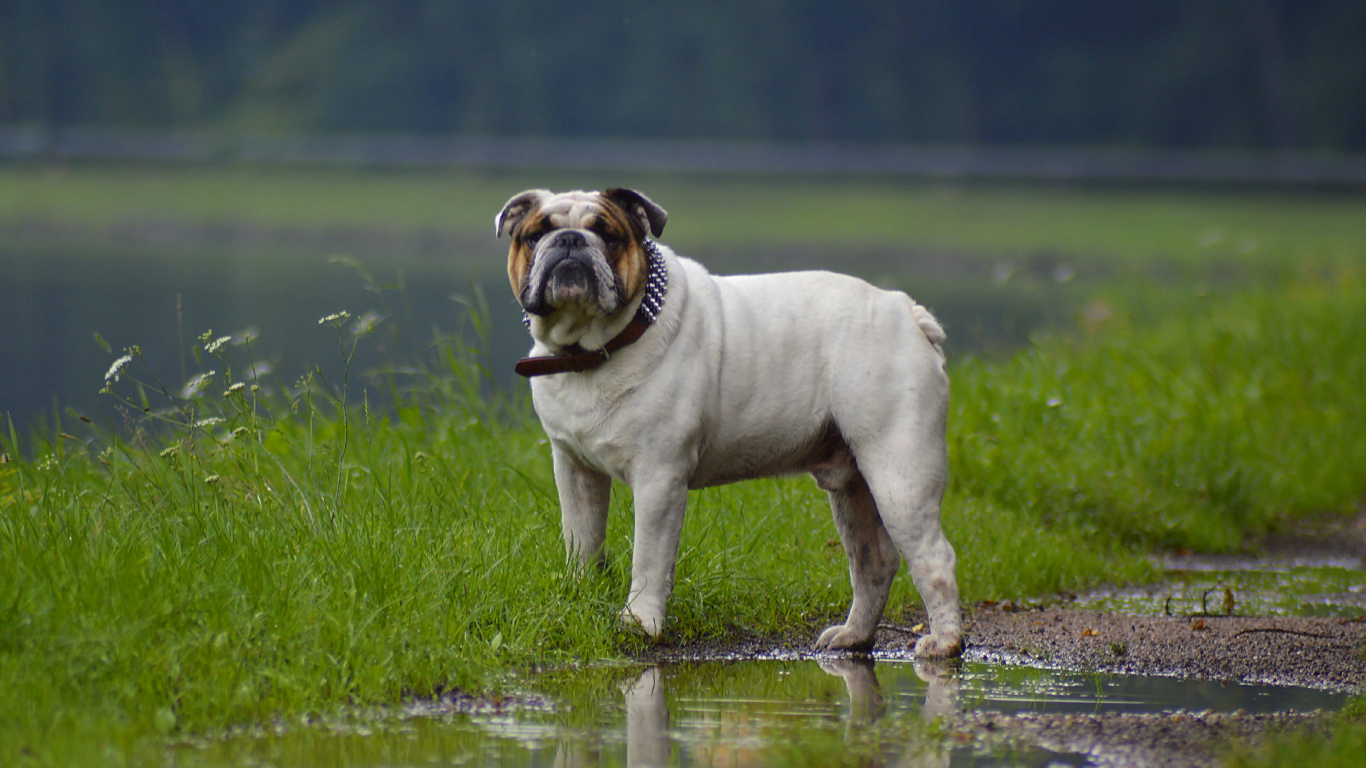 Most people who are familiar with the English Bulldog think the Olde English Dog is the same dog. Or that it is some pretentious misspelling. But the reality is that it is a completely different breed.

With that in mind, what is the Old English Bulldog vs English Bulldog difference in appearance? These two are nearly identical. You cannot say it is a completely different breed. That would be a bit of a stretch.

The main differences are in the size.

We said the main reason why people wanted to create the Olde English Bulldog was health. And breeders have managed to create a healthier breed by mixing American Pit Bull terrier, American Bulldog, and Bull Mastiff.

Now, both of these breeds suffer from hip dysplasia, breathing issues, exercise intolerance, eye issues, and more. It is imperative that you find a reputable breeder.

But the Olde English Bulldogge puppy is a healthier breed. They do not suffer from as many breathing issues as the brachycephalic breed that is the original English Bulldog.

David Leavitt developed the breed in 1971 with one goal in mind, and that was health.

Because the Olde Bulldogge inherited the personality traits of a Pit Bull Terrier or Bull Mastiff, he is a bit different. Both of these breeds are affectionate and social.

Yet, they come with their own set of quirks. With the Olde English Bulldogge puppy, that is the reason they are prone to wandering. But that is the terrier blood.

The original English Bulldog is a bit lazier and has a spunkier attitude. But both of them make great family pets. The original Bulldog is more social and gets along with all kinds of people and pets. Because of the different breeds in their development, they also have different exercise needs. The original English Bulldog is a couch potato. He is more than happy with 30 minutes of walking per day.

On the other hand, the Olde English Bulldogge has some terrier blood in him. He might need some more exercise and mental stimulation.

So, how do you train these two dogs? Training is easy with both of them, as they have pleasant personalities and are willing to please.

Combine that with the intelligence of the Olde English Bulldogge, and you have a great pet. Positive reinforcement is the key to success here.

Compared to each other, the original English Bulldog is a bit easier to train. Why? Because he has no terrier blood in him. The Olde English Bulldogge might be a bit stubborn and try to assert its dominance. But they are both eager to please their owner.

To understand the purpose of these two, we go back to their history. The Old English Bulldog was a guard dog, one that was famous for bull baiting and blood sports. The original English Bulldog of today is not aggressive.

One might say go with the Olde English Bulldogge because it is the healthier dog. But this puppy is also bigger and stronger and might be more difficult to train.

Also, because it is quite rare, the price is several times higher. And even when you pay more, you must be sure to get it from a reputable breeder.

To say it more clearly, your chances of getting a good dog are higher with the original English Bulldog.