Queen Elizabeth II was known for her love of Corgies. Her affection for the Corgi dog breed was amazing and known around the world. You can say the Queen had a lot in making this breed a household name and increasing its popularity. But the Pembroke Welsh Corgi is not the only type of Corgi. There is also the Cardigan. What is the difference between Pembroke and Cardigan Corgi?

Well, that is what we will discuss today.

Why Do People Confuse The Two?

Pembroke Corgi and Cardigan Welsh Corgi are easily confused. And because the Pembroke version is a bit more popular, people confuse the Cardigan as a mixed dog. Yet, the Cardigan breed is also a purebred dog. A Cardigan Corgi dog owner will tell you his puppy is not a Pembroke Corgi mix, but a separate breed of its own.

And because the Pembroke Corgis the Queen had were tail-free, when people see a Cardigan with its long tail, they think it is a mixed breed.

But breeders of Corgi breeds need to work harder to explain there are two distinct Corgi dog breeds and the differences between them. 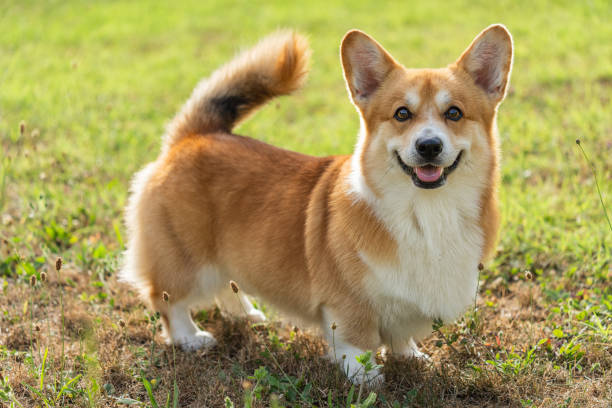 We have to start the Pembroke versus Cardigan debate with the history of the two breeds. They both worked with farmers. Their job was to take the cattle to grazing land and guard the barnyard.

Here is a fun fact. These two do not share a common ancestor. Instead, they come from different sections of Wales. Cardigans can be found in the rough, rocky terrain of Cardiganshire in southwest Wales. Pembroke Corgis, on the other hand, were found in the flatter, easier terrain of Pembrokeshire in southern Wales.

The Cardigan is actually one of the oldest breeds in Britain. Their ancestors were brought to Wales by the Celtic tribes of central Europe. According to historians and breeders, they descended from the German Teckel lineage, one that also gave us the Dachshund. Historians say that Cardigans arrived in Wales in roughly 1200 BC.

Pembrokes, on the other hand, arrived with the Vikings and are descendants of the Nordic Spitz breeds. They are a relatively younger dog breed. The American Kennel Club officially recognized the two distinct breeds in 2006.

At first glance, these two look a lot alike. Yet, look closely, and you will notice all the differences between the two.

For starters, the Cardigan breed is the bigger of the two dogs. While both Corgis are the same height, between 10 and 12 inches, Cardigans can weigh up to 10 pounds more. That might not sound a lot, but consider the fact that this dog stands around a foot off the ground.

Cardigans also have a wider range of coat color options. According to The American Kennel Club, Pembrokes are limited to sable, red, and tricolor. Cardigans, on the other hand, can be brindle, black and white with tan or brindle, blue merle, or red and sable with white.

Cardigan Welsh Corgi also have markings that are more extensive, including a black mask or a mask in another primary coat color.

And if you still cannot notice a difference, look at the tail. Pembrokes have their tails docked as short as possible. On the other hand, a Cardigan corgi will retain its long tail. 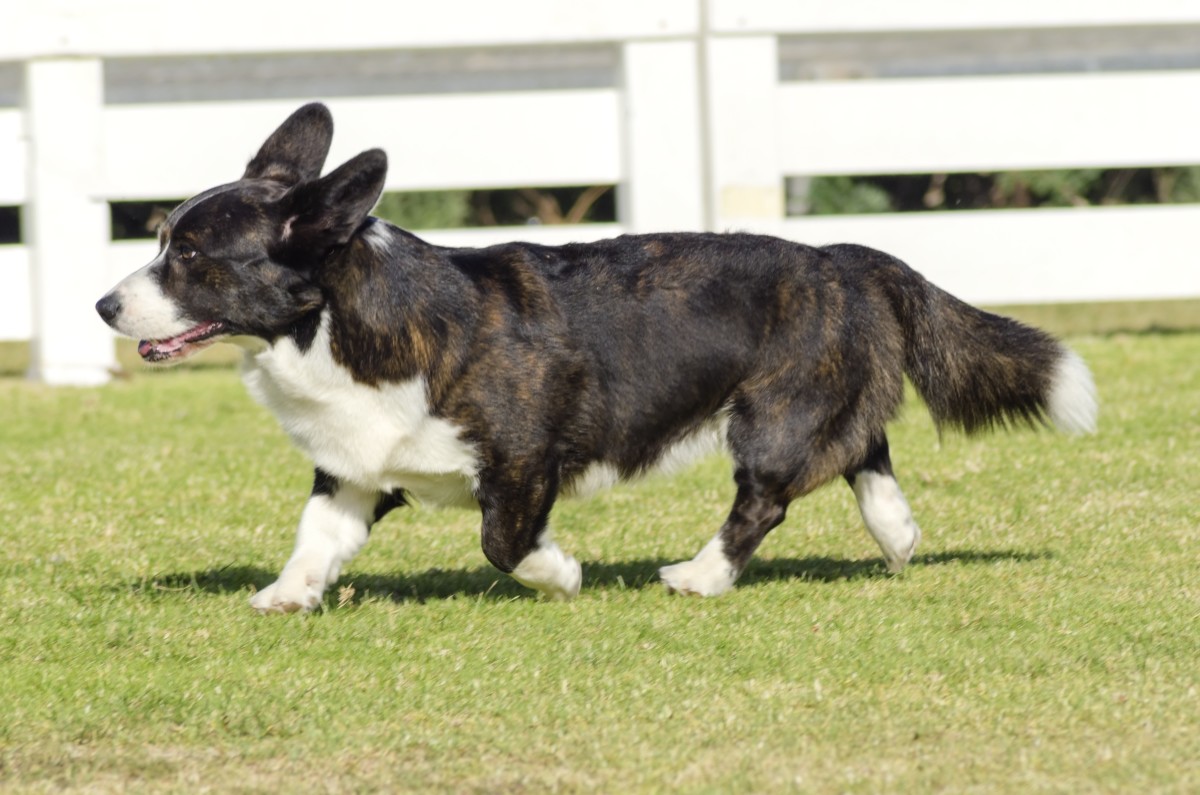 At one point, both of these breeds were used as herding dogs. They remain traditional herding canines, yet, nowadays, they fall more into the category of family pets.

No matter which Corgi you will get, they both love an adventure in the forest as much as spending the afternoon cuddling with you on the sofa.

The best part about owning a Corgi dog is that this puppy is adaptable to your lifestyle. This has made them quite popular.

Known as affectionate and loving with their family, they both have a soft spot for children. Corgis are tolerant of children, love to play with them, and enjoy just sitting next to children. Yet, make sure to supervise their play to prevent any herding or nipping behavior.

And the best part is, Corgis can easily live with other animals and family pets. They are great for a multi-pet household.

On the flip side, there is a big challenge in managing their separation anxiety. Remember, these puppies love to spend time with their close family members. When left alone for longer periods, they are known to develop separation anxiety.

Of the two, the Cardigan is less social with outsiders and can be aloof. And he is more territorial because this puppy has retained some of its traditional working dog traits.

On the other hand, the Pembroke is more accepting of strangers and barks less than the Cardigan.

You have to remember that despite its small size, this canine was used as a working dog. That means even nowadays when they have left their traditional instincts behind, they still have high energy levels.

Both breeds are medium-energy animals. Do not expect them to sit around for a long time. You need to provide them with at least 45 minutes of exercise per day and some mental stimulation as well.

This might come as a surprise, but Corgis are surprisingly athletic. They perform well in agility courses.

Of the two, Cardigans are less energetic. Again, we have to take into account that these were working dogs and herding dogs at one point. But they are easily trainable as long as you are consistent.

The best way to train a Corgi, be it Pembroke or Cardigan, is with positive reinforcement training from an early age.

They are happy, loyal, and love to be around. Because they are quite intelligent, training should play to their smart side, but also make sure to show them who is the boss.

Here is a tip. They are food-obsessed. Bring a lot of treats as they are the driving force. Use treats to your advantage and then gradually reduce the number of treats.

Corgis have an unusual shape. They are short, yet big. And because of that, they are prone to back problems. It can be worsened by obesity.

It is of utmost importance that you provide enough exercise to keep their back strong and their weight in check.

Corgis cannot run fast. Yes, they can follow you on a slow jog, but do not bring them for a bike ride.

Some of their biggest risks include hip dysplasia, degenerative myelopathy, cardiac issues, and eye disorders. It is best that you get your puppy from a reputable breeder to avoid potential hereditary issues and problems. 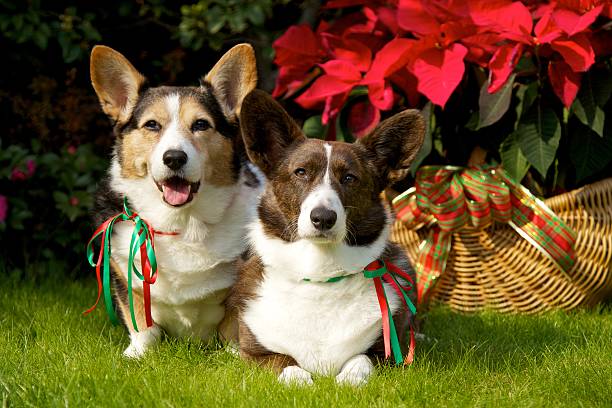 Both breeds have a similar coat. They have a double coat consisting of a dense undercoat and a fluffy overcoat.

Because of their double coat, Corgis need to be brushed two to three times per week. They shed as the months get warmer. During their shedding season, make sure to brush your pet every day to keep the coat manageable.

So now that you know there are two different types of Corgis, which one to get? How to settle the Pembroke versus Cardigan Corgi dilemma?

Well, it comes down to preferences. Is that docked tail a deal breaker? Do you want a dog with a long tail? What about barking? We said the Pembroke barks less.

The Cardigan is bigger and comes in more colors. But both of them will make wonderful family pets. It is just a choice of preferences.