Red Heeler vs Blue Heeler – How Important Is Coat Color? 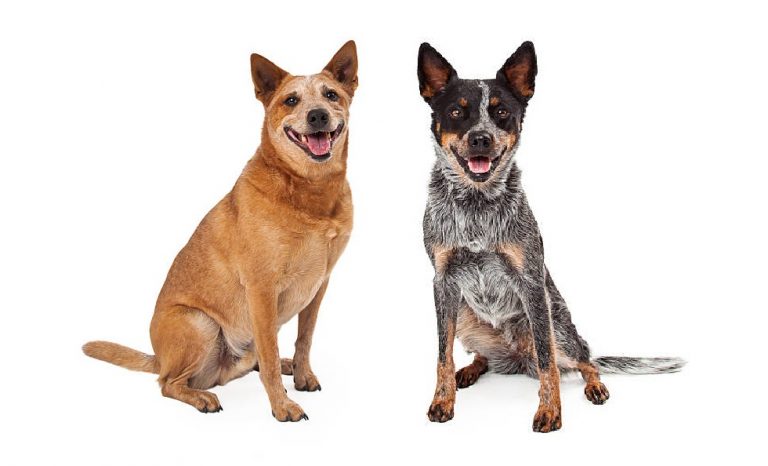 The distinctive blue color, combined with a dark coat, allows this puppy to go unspotted at night and avoid attacks from horses or cattle. The red color, on the other hand, plays a crucial role in differentiating the heelers from dingos. The latter is a notorious animal and susceptible to being shot on sight.

Thomas Hall made the breeding of a special cattle dog a necessity. He made it by cross-breeding blue merle smooth collies with dingos so that he could end up with a canine with all the vital trails of a cattle dog.

In the early 1800s in the Australian countryside, people needed a capable dog that could handle the harsh environment. So, Thomas Hall came up with an idea to cross dingos, a local wild dog, with the now-extinct Smithfield. He, later on, mixed them with blue merle Highland Collie.

The dog breed was later on crossed with the Dalmatian, making the herding dog more comfortable around people and horses.

The result was the ancestor of the modern-day Australian Cattle Dog.

What Is So Special About Australian Cattle Dog? 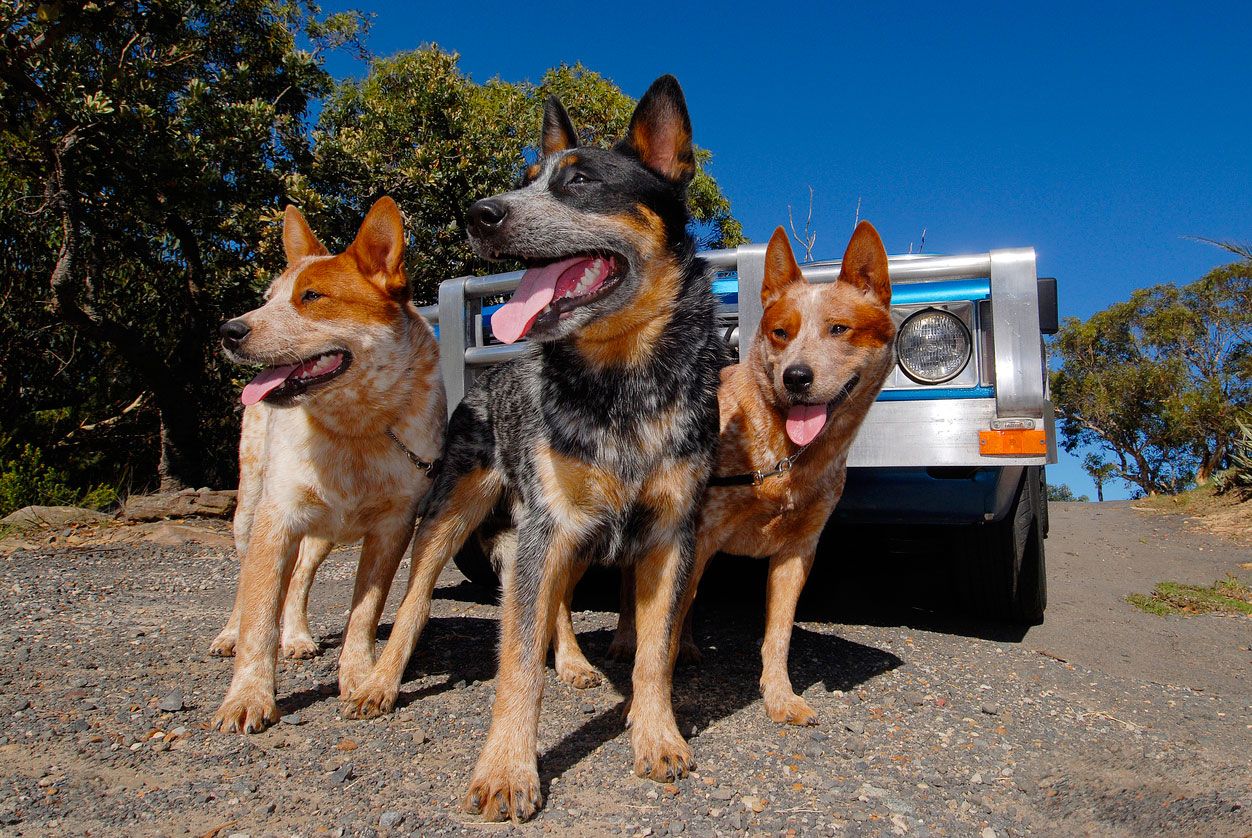 People outside of Australia might not understand it, but those living on the continent perfectly do. Cattle rearers need to move the cattle from one place to another, and it is a daunting task to shift them. You cannot airlift cattle or hire a cargo ship to do it.

You need to move them on foot while taking care of a multitude of aspects. Cattle dogs were necessary to help move the cattle. And this particular dog had to have intelligence, stamina, energy, perseverance, apt decision-making skills, and more.

And you can find all of those traits in dogs from the herding group, but even more in the Australian cattle dog puppy.

Even more importantly, this herding dog had to be steadfast and ensure that even the most stubborn and annoying cattle falls in line. Thomas Hall managed to get that special breed by cross-breeding different traits.

But what is so special about it? Well, think about this for a second. This puppy is low maintenance, wash, and wear kind of dog. Because of their short and tightly packed inner coat, they maintain a warm temperature even in harsh conditions. Add in their topcoat, which is harder and denser, and you have a dog with high resistance to rain and dirt. 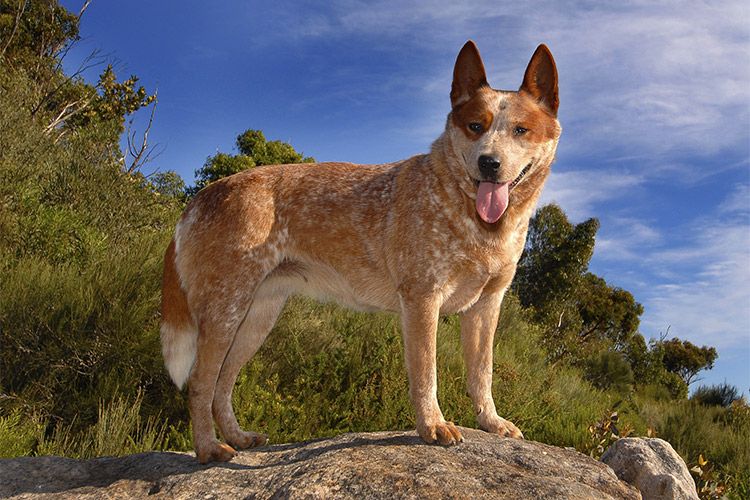 Here is a fun fact. There are two subtypes of red heelers. Those are red speckle heeler and red mottle heeler. Apart from appearance, there are no physical and cognitive differences between Australian cattle dogs.

The red speckle heeler has white hair protruding out of the outer fur coat. These white hair spots are irregular in shape and can be as big as the fingertip.

Red heelers must have their distinctive color and speckled fur, because of the way people use them. Some of them also have mottled coat fur, which can range from light red to ginger. 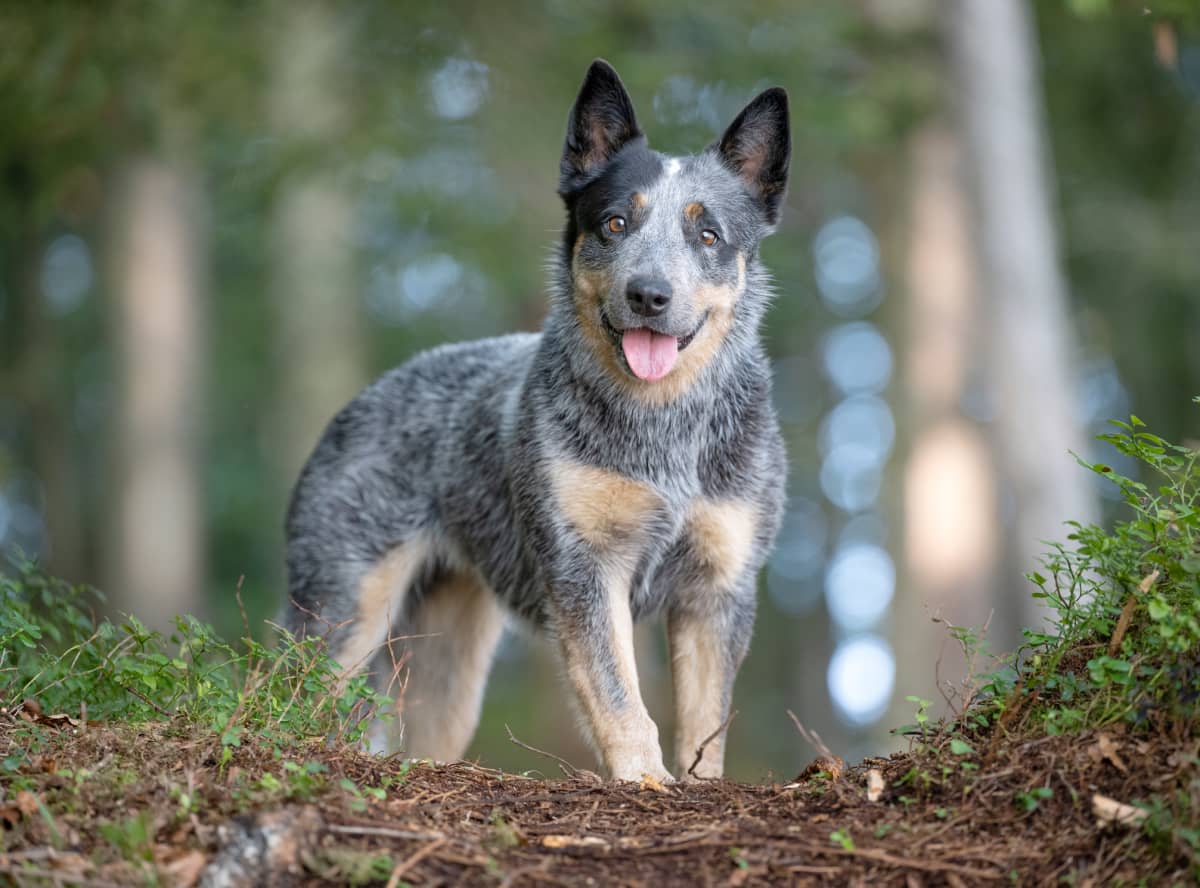 The blue heeler is equally energetic, agile, and ready to work. But their blue coat color is darker and more challenging to spot at night. That is why the red heeler is better suited for the night.

Their slightly lighter-colored tail has an extensive white spot presence, which makes it easy for dog owners to locate them at night or between cattle.

Some blue heelers might have black hair, but all of them have a tan-shaded coat at the insides of the fore and hind legs. This is a distinctive feature and breed standard set by The American Kennel Club.

What Determines The Color?

The coat color of Australian Cattle dogs is determined by the genes they carry. The science behind it is quite complicated.

Here is a fun fact. The coat color of the parents doesn’t always predict the color of puppies. For example, two blue parents can produce a red heeler puppy.

The two most important genes are Agouti, Spotting, and Ticking. The Ticking gene is what determines the coat color of the offspring.

Solid patches of either black or red are a result of which Agouti gene the puppy carries, while the spotting gene determines where the spots will appear on the body.

Color starts to show at around 4 weeks after birth. Before that, you cannot make the distinction between red heeler vs blue heeler.

Usually, one color begins to dominate between 8 to 12 weeks of age. The only difference between red heeler vs blue heeler is the color of their coat. Both of them stand between 17 and 20 inches and weigh between 35 and 50 pounds.

There is no noticeable difference depending on color. But there is a slight difference between males and females. Females measure between 17 and 19 inches, while males are between 18 and 20 inches.

As for the color, blue heelers can have several fur patterns, blue, blue mottled, and blue speckled. The blue and black and white fur grow together creating a smooth look.

Mottled Australian Cattle Dogs have white hairs growing through the red coat, while speckled dogs have patches of red amongst a primarily white coat. They can also have markings of tan, black, and tan, or red. Blue heelers usually have these markings on the head.

Red heelers should have even coloration throughout the body, including the undercoat.

When it comes to the temperament of the puppy, we have to say, they are protective, energetic, and intelligent. Look at their breed history. They were bred to herd livestock. So, as part of the herding group, they also have a strong hunting instinct and love to run.

It is important to keep them in a safe and dog-proofed backyard. This puppy should get enough exercise or you will have problems and undesirable behaviors. Those include excessive barking and destructive chewing .

As family pets, they love their family and will protect you, other animals in the home, livestock, and the home.

These are high-energy dogs. But that doesn’t mean you should only provide physical exercise. They also crave mental stimulation, so dog sports could be a great way to burn their energy.

This puppy thrives when given a job to do. Daily tasks will not suffice. You need long runs that will burn out their energy.

Do not leave them alone, they might resort to digging. Instead, you should engage these puppies in games like fetch with a ball or a flying disk. Get them running. As a highly intelligent puppy, the Australian Cattle dog is a breeze to train. But there are a few things you have to pay attention to. There will be some challenges down the way.

For example, their guarding instinct. You have to socialize this dog breed from a young age, not only with other dogs but with people as well. Otherwise, they might grow up to be aggressive and fearful.

They also have a tendency to nip heels. But you have to train them out of it as early as possible. When they nip, walk away and disengage. Do not punish them, because they do not accept discipline well.

Last, but not least, because of their strong urge to chase and hunt, they might run off when allowed some off-leash time. So be sure you have faith in your puppy before letting it go off-leash.

Can These Heeler Dogs Be Family Pets?

You might be wondering with so many challenges, can these puppies be domesticated? Yes, with proper training, support, and socialization, even the most hyperactive heeler can have an amazing family life.

But do not expect them to completely forget their instincts as herding dogs. Be prepared to keep them busy, otherwise, you will have problems with negative behavior.