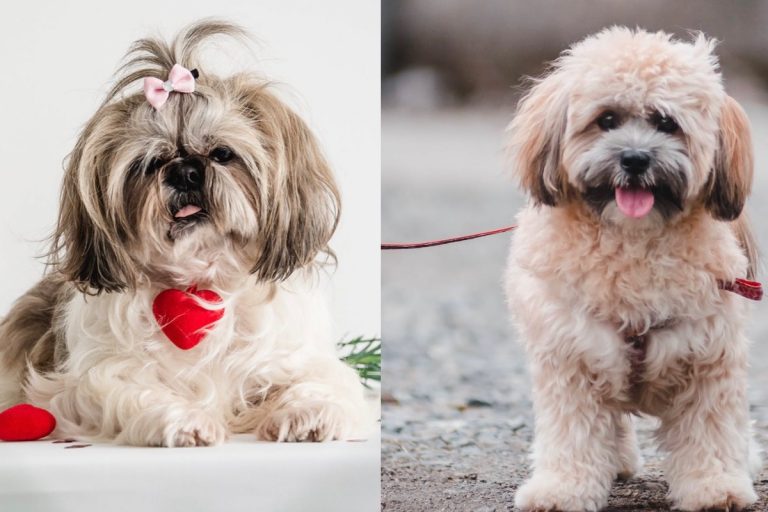 Both of these dog breeds are small dogs. They are purebred companion dog puppies that are native to East Asia. You might think they originate from the same country, China. But the reality is Lhasa Apso comes from Tibet, a region China thinks of its own. In reality, it is not. What is the difference between Shih Tzu vs Lhasa Apso?

How similar are these two dog breeds? How different they are? Let’s take a look.

When you ask a professional dog breeder to qualify these two, he will tell you they are quite similar in appearance. Both the Shih Tzu dog breed and Lhasa Apso dog breed have a rectangular shape and a long, beautiful, double coat.

In the early 1940s, the American Kennel Club might have registered Shih Tzu as Lhasa Apso. That was the time the dog breed was first introduced to the US.

The public often mixes up these two puppies. Both breeds in full coat attract attention. From a distance, they might appear similar.

But if you look closely, you will notice quite a few differences.

The similarities are that they both make great companions and pets, mainly due to their amazing personalities.

The similarities between Shih Tzu vs Lhasa Apso originate from the fact that Shih Tzu was developed from Lhasa Apso. The latter dog breed, originally from Tibet, takes its name from Lhasa, the capital of Tibet.

Lhasa Apso is an ancient dog breed, tracing its origin as far back as 800 AD. That is the period when Buddhism started and the puppy was cherished by Tibetan people and Tibetan monks. It served as a companion dog to the Dalai Lama of the temple.

Lhasa Apso had an acute hearing and alerted the Dalai lama to an intrusion. They were often accompanied by the Tibetan Terrier, Tibetan Mastiff, and similar dogs providing protection.

The Shih Tzu, on the other hand, was developed by the Imperial Palace of Chinese royalty. It is shrouded in mystery. There are legends, documents, paintings, and many art objects referring to a Shih Tzu-like dog during the Tang Dynasty.

The most likely origin is that the Shih Tzu was brought from Tibet to the Chinese court in the 16th and 17th centuries. It translates to lion dog. The early Shih Tzu was bred with Pekingese in the palaces of the Forbidden City in Beijing.

As we said before, Lhasa Apso is a parent breed to Shih Tzu. It is no wonder they are so commonly confused with each other.

If you look at their size, both fall into the category of a small dog or little dog. The Apso is slightly larger at 10 to 11 inches in height and 12 to 18 pounds in weight. Shih Tzu, on the other hand, can grow up to between 9 and 10 inches and 9 to 16 pounds.

Both breeds have a long coat, with the Lhasa Apso’s coat being floor length and flag-hanging. Traditionally, it is parted in the middle. Shih Tzu has long flowing double coat and tails that curl over their backs.

Now let’s talk about breed comparison in terms of personality. First and foremost, you have to look at their ancestry and heritage. Lhasa Apso dog was bred as a sentinel for monasteries. This puppy is more of an indoor watchdog. He is curious around strangers and has a ready bark to alarm the household of any intruders.

At the same time, the Apso serves as a lap dog. He is affectionate with the family and happy to receive as much attention as you give. The American Kennel Club describes the dog breed as a highly intelligent and willful toddler.

Shih Tzu is also a lap dog. Its goal in life is to please its people. Being a former pet of royalty, the Shih Tzu puppy loves to be spoiled with pleasure and attention. Outgoing, affectionate, and playful, the breed is wonderful with kids and dogs.

Another breed comparison we need to make is about the activity level. Both of these puppies are excellent apartment dogs that require only moderate exercise. They are happy with once-per-day walking.

They will gladly use the length of your apartment as a track field and your furniture as their comfy sleeping place.

Lhasa Apso dog is a highly intelligent puppy that responds well to consistency and leadership. The Shih Tzu breed, on the other hand, is a people pleaser that will respond to praise and positive reinforcement.

Punishment and hard discipline will only backfire with these dog breeds. If you bully the Apso, you will end up with a stubborn dog. And if you bully the Shih Tzu, it will likely curl up and sulk.

If you get any of these breeds, you have to look for eye issues like progressive retinal atrophy and hip dysplasia. The Lhasa Apso may also have hereditary kidney dysfunction, dry eye, and cheery eye. Shih Tzu is known to have patellar luxation, cataract, retinal detachment, and corneal dryness.

Being that both are infrequent shedders, they need a moderate amount of grooming and maintenance. Their dander can cause allergies. Yes, they might fall into the hypoallergenic group, but they are not 100% hypoallergenic.

For health and style, their long hair requires regular grooming. In the end, you get two wonderful dogs in small packages.