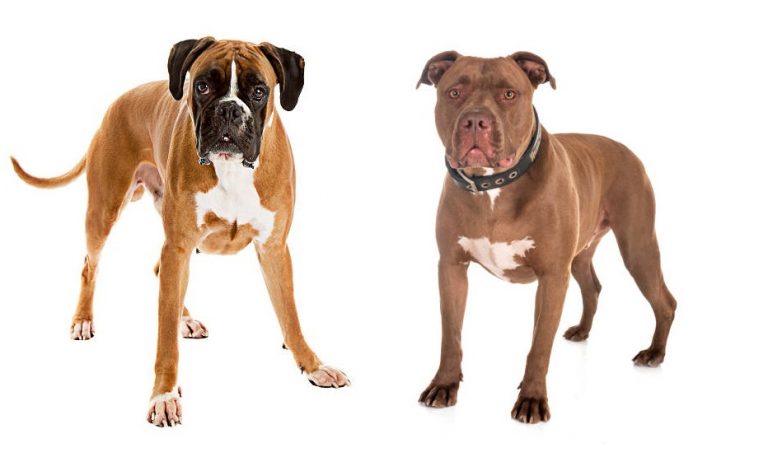 On the surface, these two dog breeds look very similar. They love their respective family and have the energy that can bring joy and laughter to the household. When comparing Boxer and Pit Bull, you have to understand it is a comparison of athletic dogs. They are not suited for owners who do not have time to exercise them properly.

Of the two, Boxers have more genetic health issues and do not live as long as the American Pit Bull Terrier, but they do have their own pros and cons.

There are genuine differences in the Boxer versus Pit Bull debate. If you want to choose one, it is vital that you make an informed decision.

So, let’s take a deep dive into this breed comparison and help you pick the best companion dog. 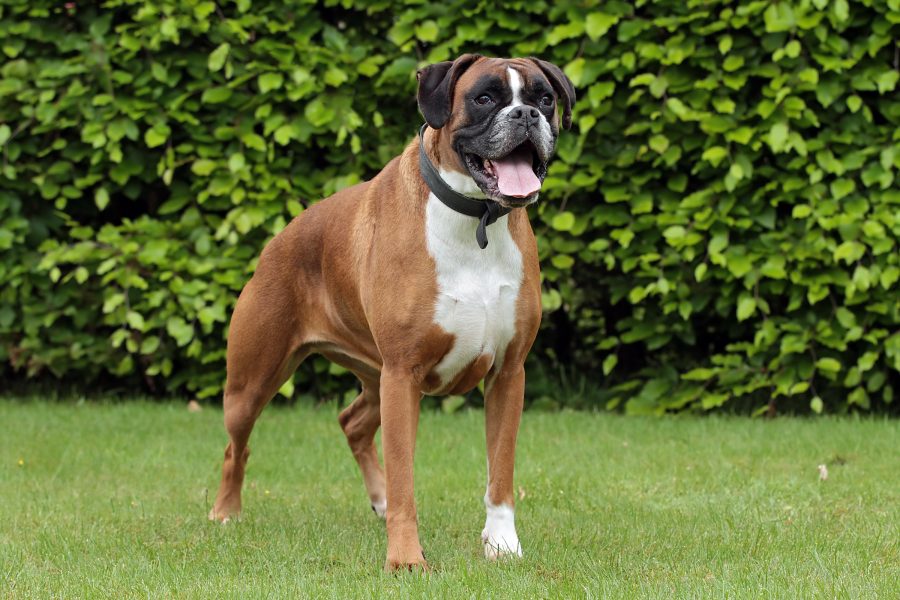 With that in mind, these two have different histories. Originally, they were both bred as hunting dogs. The Boxer hunted large game animals, while Pit Bulls were used for hunting vermin. But over time, because of irresponsible dog ownership, the American Pit Bull Terrier was used as a fighting dog. This is why many consider him an aggressive dog.

But that is not the case. The Pit Bull has a vicious and very unfair reputation. They were used as fighting dogs in 19th-century England. The cruel sport was outlawed in 1835, yet, immigrants took their puppies to the United States of America, where they continued the sport for a brief time.

Boxers date to the late 19th century in Germany. They were bred from a larger breed, the Bullenbeisser, which is now extinct. It translates to Bull biter, a large dog trained to hunt bulls and wild boars.

But over time, people in Germany wanted a more slender and agile dog that can fit as a family pet. So, they mixed the Bullenbeisser with other dogs and created the Boxer. Why the name? Well, because of the way the puppy uses its front limbs to defend himself in a fight and play, similar to how boxers do it. 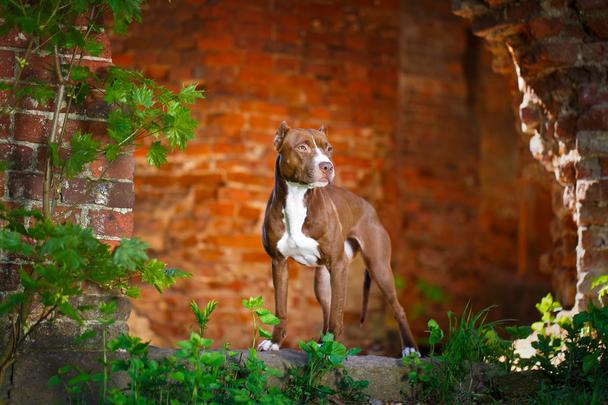 These two are nothing alike in their appearance. You can easily tell the difference. The Pit Bull is the smaller dog, with male Pit Bulls standing at 18 to 21 inches. Compare that to a male Boxer standing at 23 to 25 inches, and you have a clear idea. Pit Bulls weigh between 35 to 65 pounds, whereas Boxers weigh between 65 to 80 pounds.

What is similar is their body. These two have similar-shaped bodies. Their body is in proportion, with long legs that carry a thick and square-shaped body.

Boxers might have their tail docked because of the traditional look, while the Pit Bull might have his ears cropped.

The most distinguishable feature of the two is the face. Pit Bulls have a squarer face, with a longer muzzle. Their face is also more proportionate. And you cannot ignore their smile.

Boxers have a rounder face, a lower jaw that is longer than the upper jaw, and a baby-face look with large round eyes.

Fun fact: if you want a unique and rare puppy, you can get a blue nose Pit Bull. 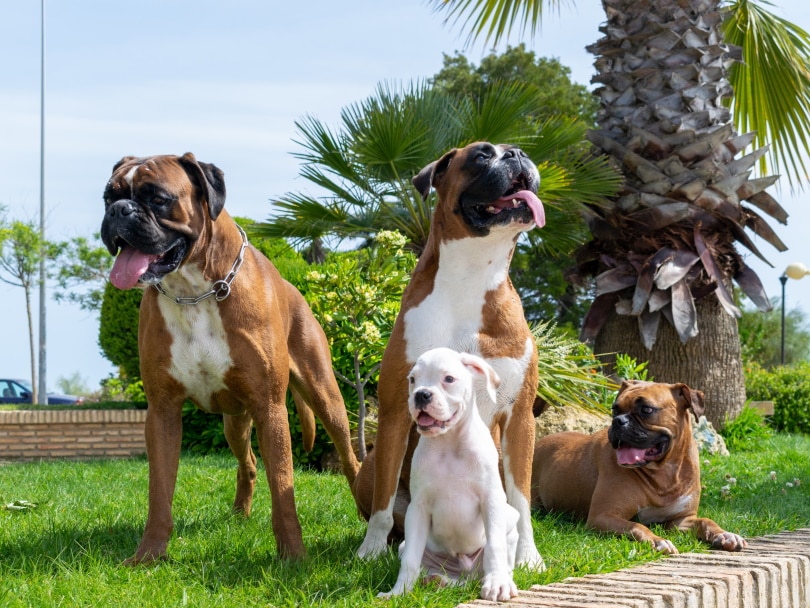 Nowadays, both of these dogs are family pets. We said they have a hunting dog history, but they have been used as family dogs for many years now. Great with children, they love being around the family and will do anything you do.

It is unfair that the American Pit Bull terrier has a reputation as a fighting dog. He is amazing with children. Of the two, Boxers are the better guard dog because they are wary around strangers. Pit Bulls are the friendliest dog you will meet. They wag their tail to greet anyone, almost like a Labrador Retriever.

Do not expect your Pit Bull to be a guard dog. Both of these puppies are family pets. But there is a difference. Boxers have to warm up to strangers, while Pit Bulls will take all comers to their hearts.

Both of them are intelligent animals that will push and probe to see what they can get away with. Training and socialization are essential for these puppies.

Of the two, Pit Bull terriers require less energy. Boxers fall into the high-energy group, while Pit Bulls are in the medium-high group.

There is also a difference in the type of exercise they need. Boxers enjoy more play exercises where they can show their clownish behavior. They love romping and frolicking around until they burn their energy. Pit Bulls, on the other hand, love the more traditional type of activity, long walks. But they also enjoy some time off-leash. 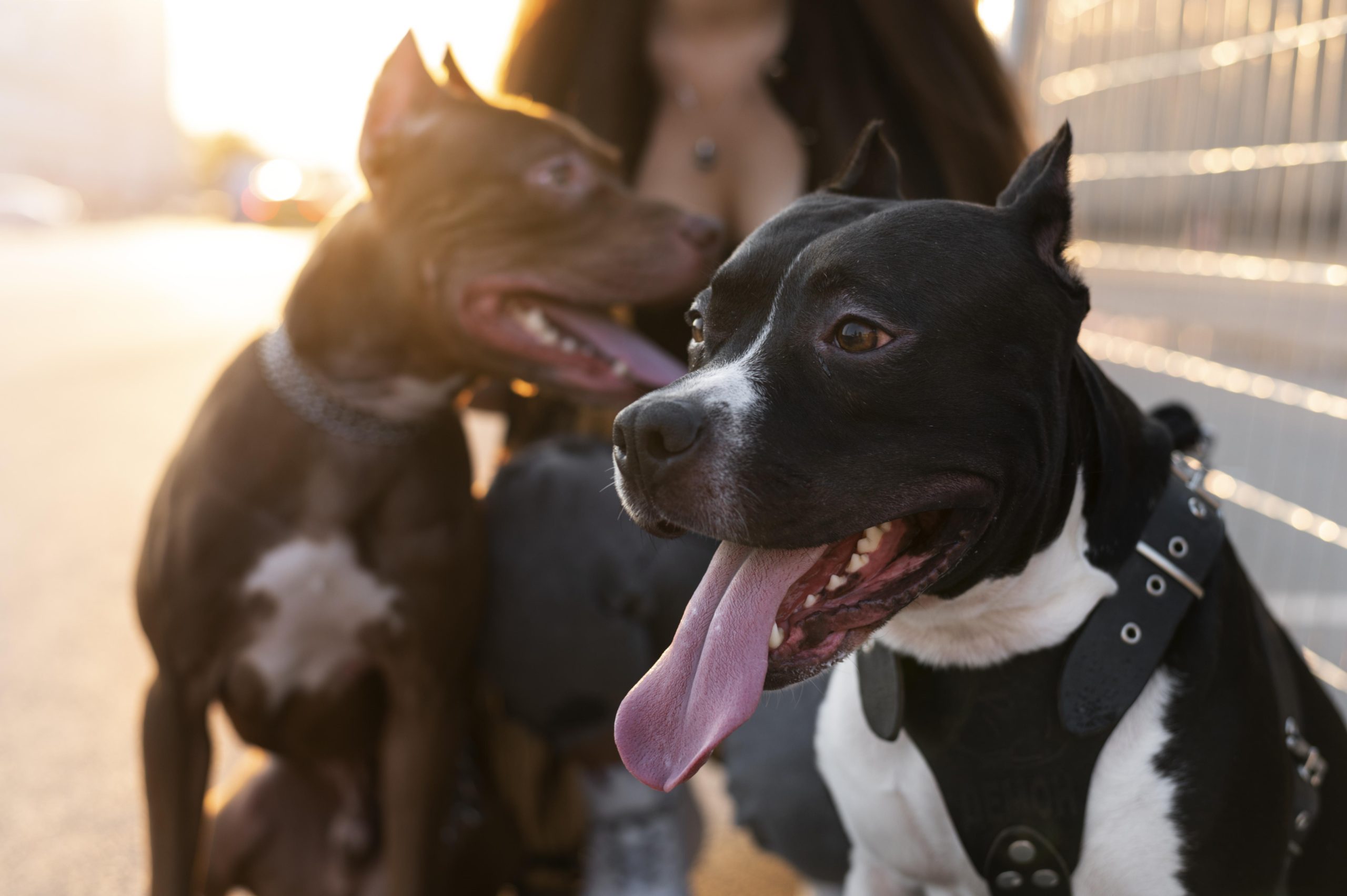 With any dog, early socialization and training are a must. Neither of these two is dominant, but they do need a pack leader that will provide consistent training.

Speaking of training, there is a difference here as well. Looking at the Boxer versus Pit Bull debate, both are intelligent and can be stubborn.

But Boxer is the easier one to work with. They respond to different rewards as well. Boxers are more food-oriented, while Pit Bulls are affection-driven.

With a Boxer, you can combine training with some games. Turn training into a fun game with praise and treats.

First-time owners will do easier with boxers, but they might have a challenge with a Pit Bull.

These two have health issues and genetic weaknesses. But if you get your puppy from a reputable breeder, you might avoid them.

Pit Bulls are relatively healthy, but they do suffer from some health issues like hip dysplasia, heart disease like aortic stenosis, and more.

Now we are at the final part of the Boxer versus Pit Bull debate. Which one is the right for you? Well, it comes down to your preferences and the type of dog that you want.

If you want a friendlier dog, go with the American Pit Bull Terrier. This dog is friendly toward everyone, animals, strangers, children, cats, and anything in between.

Both are great as family pets, and they are more sociable and affectionate with the immediate family. Boxers have a bit of a guard dog instinct and might be aloof with strangers. But he is quick to accept them.

Then you also have to take into consideration the price. Nowadays, there are many Pit Bulls in shelters because of their bad reputation. You might get one for free by adoption, while Boxers might cost a bit more.