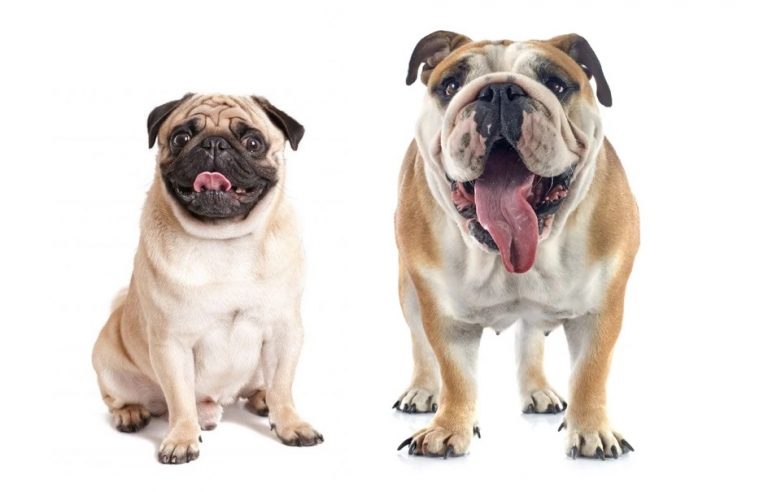 These two are known for their adorable face and wrinkly skin. Of course, the many funny internet videos. Pugs and Bulldogs are two amazing house pets, especially for a less active family with a small apartment. You are probably wondering which one of these two to get. Well, do not worry, we have tried to help you solve the Pug versus Bulldog dilemma.

At the end of the day, we love both of them. But since you can only have one (or can you, smile), we want to help make an informed decision.

If you want funny and comedic dogs, these two are the way to go. A simple Google search and you will have a bulldog riding a skateboard, a pug wearing a Halloween funny costume, a Bulldog drooling at home, a Pug acting like a clown, and so on.

Whichever dog breed you choose, your life will never be the same. These two are goofy and funny as hell. That is when they are not sleeping.

If you want to understand the difference between any breed, in this case, Pug versus Bulldog, you have to look at the breed history.

With that in mind, Pugs were bred to be true companions. Here is a fun fact: they are some of the oldest Chinese dog breeds and dog breeds in general. Bred more than 2,000 years ago, they are pets of the emperors and Chinese royalty.

According to ancient legends, their wrinkles resemble Chinese language symbols for good luck. Another legend says that the wrinkled mark symbolized the lucky Chinese character for a prince. This is where the reference to Prince Mark comes from.

Pugs have been part of many royal families over the years. While they were originally favorites of the Chinese royalty, in the 19th Century, British Queen Victoria had many pugs. She named them Olga, Pedro, Venus, Minka, and Fatima. Even King Napoleon’s wife Josephine Bonaparte had a Pug.

Now for the Bulldog. Originating in England, the puppy was first bred in the 1500s. The English Bulldog, popularly known as the Bulldog, is a descendant of mastiff-type dogs. Nowadays, we use the term English Bulldog only to make a distinction between this dog and the French Bulldog.

Fun fact: while they are happy to go around puppies and couch potatoes nowadays, Bulldogs were once used for the bloody sport of bullbaiting.

While its ancestor was a fighter dog, modern English or sometimes referred to as British Bulldog is content to be a lover. Some people say they are lazy, but that is not true. They are fun-loving animals that will stay by your side and play with your children. 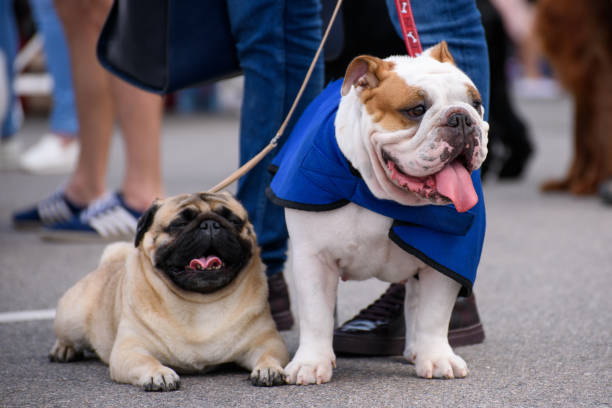 Then, you also have to look at the appearance. The Pug dog breed has a round, large head with prominent forehead wrinkles. According to The American Kennel Club, acceptable coat color options are fawn, white, apricot, or black.

The Bulldog, on the other hand, has a broad and square head with a wrinkled forehead and comes in coat color options like red, white, brindle, piebald, or fawn.

You can also notice a difference in the jaw. The lower jaw is very prominent in the Bulldog.

Both of these breeds are classified as brachycephalic dog breeds.

We touched a bit on the temperament of these dogs before. But let’s get to the nitty-gritty.

Some people wrongly think of the Pug as an unintelligent dog breed. But they are smart enough to take advantage of poor training and loose boundaries. They do respond well to

Considered the class clown of dog breeds, Pugs love attention and they love to show off. Because of their charm, their owners often let them push the boundaries. In reality, Pugs are adaptable. Originally bred as lap dogs, they crave human companionship. So, if you want a lovable and affectionate companion dog, Pugs are a good option.

The biggest challenge is they are prone to unnecessary barking.

Now, let’s talk a bit about the English Bulldog. This brachycephalic breed can sometimes be stubborn. As a result, a lot of people think of it as the less intelligent dog. But that is not the case. Yes, training is a challenge.

But as a family pet, the English Bulldog is easy-going and loves to please. You will be surprised, but these puppies are very energetic. They mellow out with age. Adult dogs prefer a lazy day and sleeping, while puppies enjoy playing games. They are protective and loyal, and with early socialization, they will be a joy. Unlike Pugs, they are not prone to excessive barking. Training any of these dogs is a challenge. One is a bit stubborn, and the other is a bit aloof. Truth be told, they are both rather stubborn.

Do not consider long training sessions. These dogs do not have the attention span of a German Shepherd or Labrador Retriever. Short and positive training sessions with food as motivation will work best. Just be careful with food, both dogs are prone to obesity and overeating.

You can motivate your Bulldog or Pug with treats, praise, and some playtime.

If you want a companion dog that will come with you on long walks, look elsewhere. Yes, the English Bulldog might come with you on a hike or two. Same for the Pug. But that is not their preference.

Remember, these two are brachycephalic dog breeds. That means they suffer from breathing problems. And if the weather is warm, they will have a hard time following you on a long walk.

Simply put, these canines are suited for a less active family that enjoys a peaceful walk. They will play within the family, but do not expect them to play fetch for 30 minutes.

Avoid walking them during hot weather. Around 30 minutes per day is more than enough exercise.

Which Is The Better Family Pet? 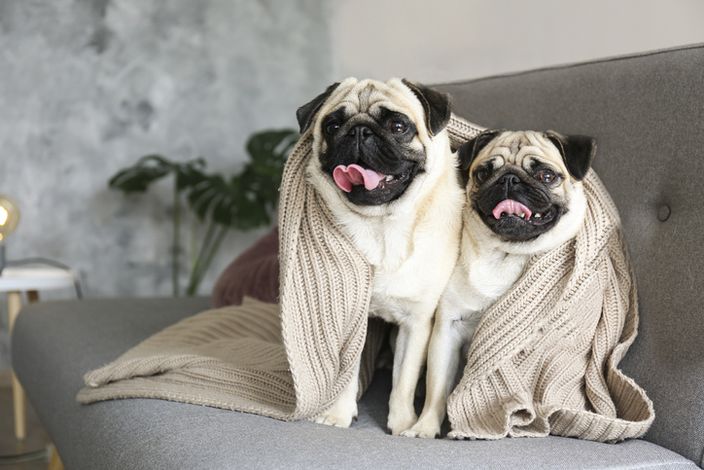 When it comes to a family pet, which these two dogs are, you need to consider several factors. That includes their behavior with children and other animals.

Both of them make wonderful family dogs. They love people and quickly become best friends with your children. They are better suited for older kids since they will not tolerate grabbing, touching, and so on. The English Bulldog is more tolerant of the two.

As for other animals, they do well with other dogs. Pugs are friendlier towards other dogs. Remember, at one point, the Bulldog was bred as a guard dog. Bulldogs are also more reserved when meeting unfamiliar dogs.

As we said before, Pugs and Bulldogs fall into the brachycephalic breed group. Because of that, they suffer from several health issues, including breathing problems.

Most importantly, they are prone to overheating and bloating.

Pugs share many of the health issues that Bulldogs do, but not to the degree of the Bulldog. They do have kneecap dislocation and eye problems.

One of the biggest challenges is that these two dogs are sensitive to anesthesia. So, make sure to choose a veterinarian who has experience with brachycephalic breeds. 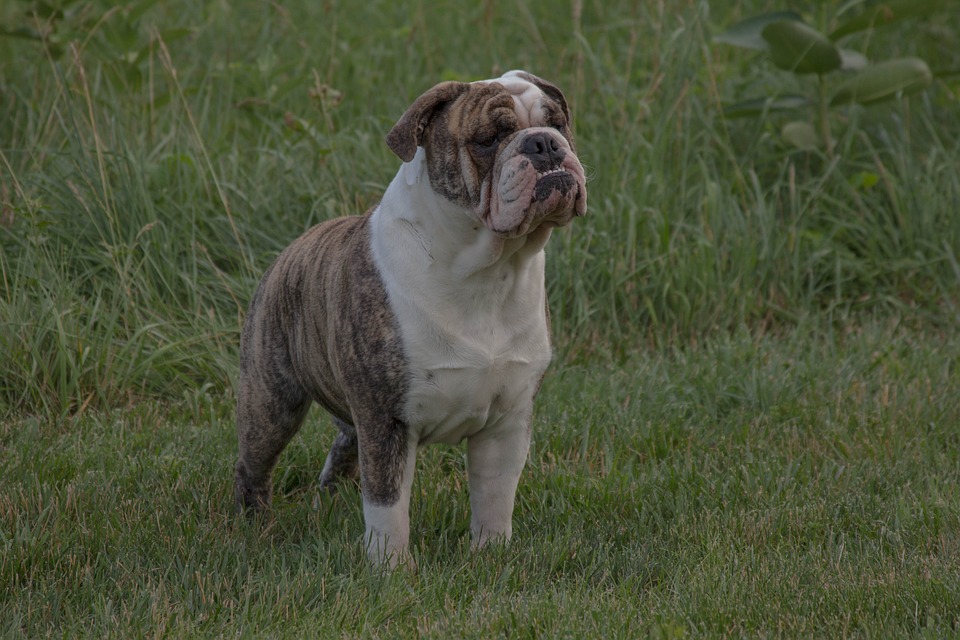 Shedding is an issue with both of these breeds. Pugs have short coats. Yet, they shed a lot. Bulldogs, on the other hand, have moderate shedding.

But be ready for some hair around the house.

Now, it is time for the answer to which one to get. Pug or Bulldog? Well, we hope you can make an informed decision. It really comes down to preferences.

They are quite similar, and each dog has its own set of challenges. Pugs bark more and shed more, but they are friendlier with strangers and other animals. They also live more, and because they are smaller, you have lower bills for dog food.

Bulldogs are lazier, but also more stubborn. As a prospective dog owner, you also have to look at the price. Bulldogs are in the top 5 most popular dog breeds according to The American Kennel Club. That results in a higher price compared to the Pug.