Wolf vs Husky – What are the Key Differences? 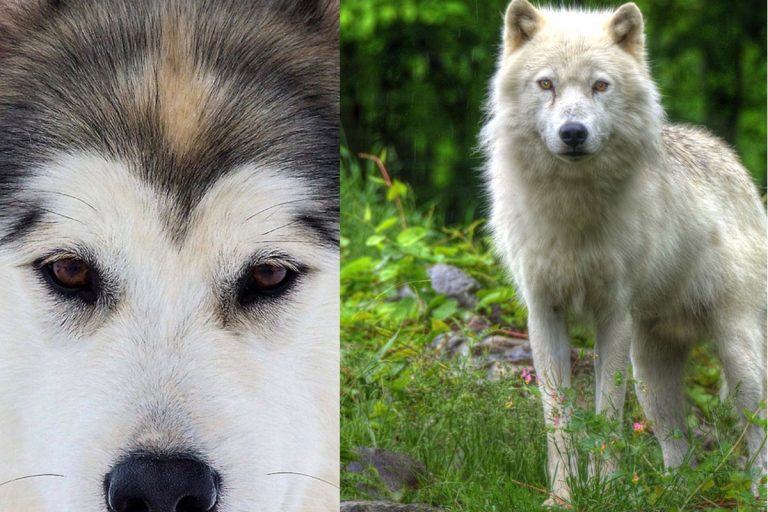 When you talk about history and resemblance in the canine kingdom, a common question is whether the Siberian Husky is a descendant of the wolf. How much are huskies and wolves alike? Are they are related? Well, today, we will address the wolf vs Husky question and debate.

Some people in the canine world believe that the dog is descended from the wolf. Domestication of dogs took place over the last few thousand years. And the closest dog to the wolf is the Siberian Husky.

Yet, other scientists believe that there is some genetic evidence for the wolf theory, but they believe wolves and dogs come from a common ancestor.

Thousands of years of cross-breeding dogs have resulted in murky waters. We cannot say for certain how dogs and wolves are related.

So, what is the difference between a wolf vs husky? Despite the similar appearance, there is a wide gap between the domesticated husky wolf dog and the wild wolf. 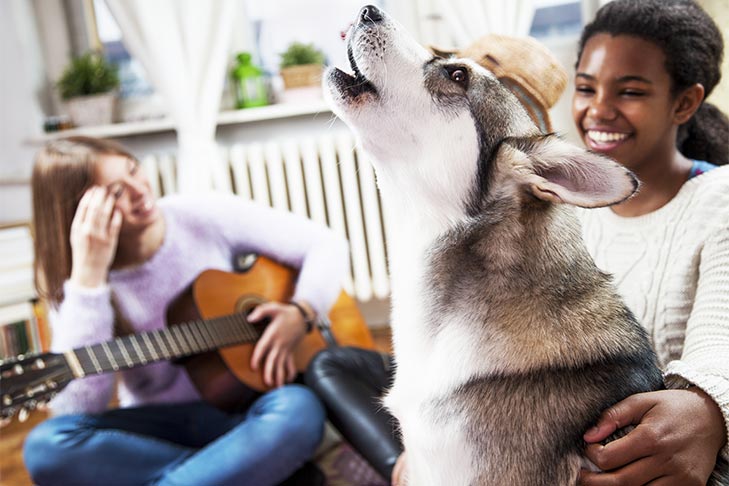 Before we address the Husky vs wolf debate, let’s talk about the Husky dog breed itself. The widely accepted theory is that the Husky is part of the Spitz family.

These dogs were built and bred for the cold weather and they love snow. Bred originally by the Chukchi people of Siberia, huskies found their way to the United States of America after competing in the All-Alaska sweepstakes sled race in 1909.

Since then, huskies have been part of the modern American family. According to the American Kennel Club, they are among the top 30 most popular dog breeds in the US.

The sled dog is a nature lover and adores the outdoors. The colder the weather, the better. 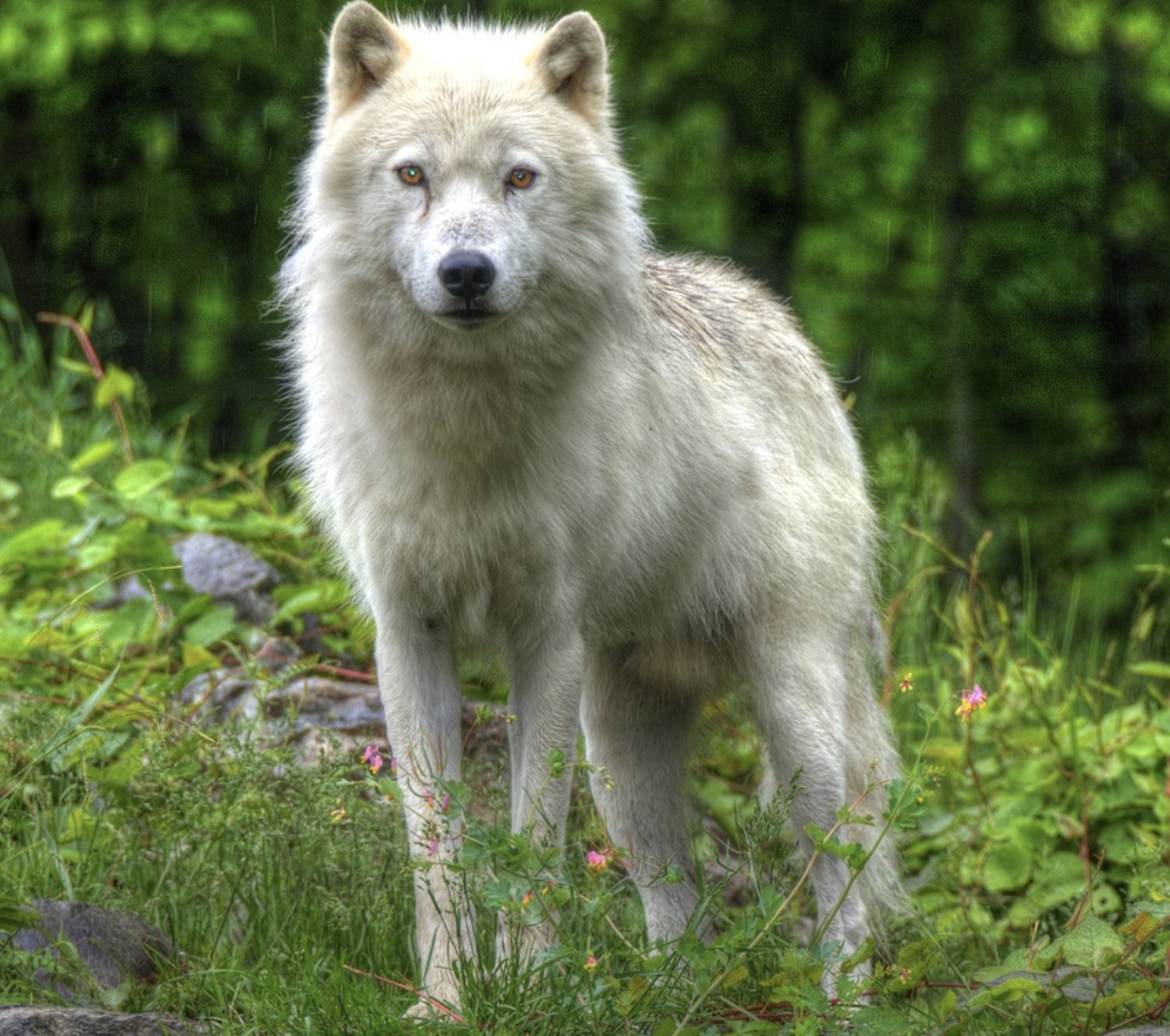 It is hard to tell when the wild wolf was domesticated. Yet, some researchers believe that happened some 10,000 to 30,000 years ago. Can you imagine how much cross-breeding has been going on since then?

Nowadays, there are many species of wolves, and more than 40 subspecies. The main three species are timber wolf, red wolf, and gray wolf.

These timber wolves, red wolves, and gray wolves inhabit Europe, Asia, and North America. We have to say, they have become endangered due to sport hunting.

Now, it is definitely possible to have a wolf dog as a pet. But it requires a permit, experience, and ideal living conditions. Not many people, if any, have all these conditions to own a pet wolf.

It is an appealing idea. Yet, for the sake of both you and the animal, we recommend not to try it.

One of the reasons why we have the wolf vs husky debate is the appearance comparison. These two look very similar. Both the wolf and the husky have thick fur, one that keeps them protected from the elements. Under that fur, both have an undercoat that insulates and retains their body heat. And then they have similarly shaped heads.

But let’s take it deeper. The husky is a large dog, but the wolf is much larger. In fact, the wolf is the largest animal in the canine family.

Huskies measure up to 23 inches tall from paw to shoulder. Now compare that to the wolf. For example, the Gray wolf measures between 26 and 32 inches.

Huskies are famous for their signature blue eyes, while wolves have yellow eyes. Huskies can have fur in different colors, while wolves are gray, timber, and red.

Then, you have to look at features that have resulted from domestication. The Siberian Husky does not have all the features needed for life outside in the wild. The wolf, on the other hand, has larger paws that enable him to walk across different terrains, including icy snow and boiling desert sand.

When you look at the Husky vs wolf debate, it is obvious, the big difference is in their habitat and distribution.

Huskies are a domesticated dog breed. They can be found worldwide. Yes, they are mostly adapted to living in cold weather climates and cannot tolerate heat well. They originate from the Arctic tundra of Siberia, but they still can be found anywhere in the world.

Wolves, on the other hand, have adapted to tolerate warm weather climates. Yet, in those regions, they grow shorter, have coarser hair, and do not resemble the original wolf as much.

The average lifespan of huskies is between 12 to 15 years. Wolves, on the other hand, live between 6 to 8 years in the wild.

You have to remember, wolves face multiple threats, including other predators, disease, cold, hunters, and the environment itself.

Their life is nasty, brutish, and short. In captivity, however, wolves can live up to 20 years.

When it comes to temperament comparison, huskies and wolves are profoundly different. For starters, one is a domesticated animal and the other is a wild animal.

During domestication, the process involves altering the mindset of the animal. This way, the animal can cohabit successfully and peacefully with humans.

As a result, huskies thrive in human company and feel uncomfortable without them. They might even howl when they experience separation anxiety.

Also, a domestic dog does not fully reach the age of maturity because they will always be dependent on their human master. Wolves, on the other hand, mature fully at around 2 years of age. At this point, they leave their family unit to form their own pack or join another. At 2 years of age, wolves are mature enough to survive on their own.

Last, but not least, huskies are silly and play and mess around with other animals and humans. They thrive off exchanging affection. Wolves do this only, but only for a purpose. They may fight with their playmates, but only as a necessary lesson to learn how to fight or hunt. They do not cuddle with their packmates for sure.

When you look at Husky personality traits, they are vocal and silly canines. They have boundless energy and you can hardly keep up with them. They are generally good with people of all ages, but they can be very hyper.

While they are tolerant of children, huskies might knock them down unintentionally during their zoomies and hyper activity.

Huskies are the epitome of a free spirit, meaning they don’t work well locked up in a cage or in a room with no space to roam.

Remember, they were bred for work, so if they do not get exercise and mental stimulation, they can develop poor manners and unwanted behavior.

Now about wolves, they are known for being fierce, relentless predators. They are pack-minded and powerful. Wolves rely on their pack, and unlike dogs, they form highly complex relationships with their family.

Males are females carry themselves differently. Females are those who are more domineering and in charge. Males show off initially, but they become more agreeable.

With proper obedience training and positive reinforcement training, you can easily train huskies. And they do have obedience in their blood. Remember, they were bled to sled, so they will listen to you.

The problem is they are hyper and training can be a challenge in the beginning. They can get too excited and overwhelmed.

If you own a pet wolf, proper training is essential. But it is not easy. Their instinctual nature means they need an established hierarchy. From a very young age, you have to establish yourself as a leader.

But because of their natural prey drive, you may never be able to train them to be around other animals. After all, wolves are wild animals.

Overall, huskies are healthy dogs and animals, but they do have some potential issues. They are prone to skin problems like allergies that cause hotspots, rashes, hair loss, and itching. Huskies also suffer from eye issues like cataracts.

Wolves, on the other hand, are genetically designed to withstand the elements. Their health issues come from their size. Like a large dog, they can suffer from issues like bloat, hip dysplasia, and joint issues.

Why do huskies and wolves howl?

When it comes to similarities between wolf vs husky, howling is one of the most common. They howl for different reasons.

For wolves, that is to mark their territory or locate other members of the pack. Huskies do retain the same instinctual urge to howl. But they do it when they are upset, when they try to communicate with other dogs, or when they vocalize their feelings.

Can wolves be domesticated?

As we said before, there is a possibility. Wolf ownership has been a subject in the United States of America for a while. But there are not many examples and information about it.

There are many infamous failed attempts. For example, the Gysinge wolf. He was kept in captivity for years, and then he escaped and injured 31 people, 12 of them fatally.

The main danger in domesticating a wolf comes from people treating it as they would a dog. We cannot stress this enough. A wolf is not a dog and should never be treated as such.