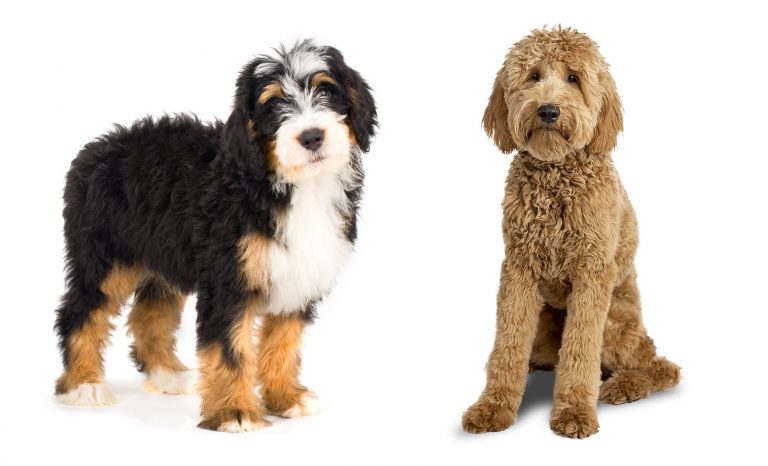 In the past few years, doodle breeds have become one of the more popular dogs. Why? Because they combine Poodle, a hypoallergenic dog breed, with other canines that give your puppy even better personality traits. And then, you have to consider the health factor. A mixed-breed dog is generally healthier than a purebred dog. Let’s take a look at the Bernedoodle vs Goldendoodle comparison.

The general idea is simple. A Bernedoodle puppy is a cross between a Bernese Mountain dog and a Poodle, while the Standard Goldendoodle is a mix between Golden Retriever and Poodle.

From their origin, you can instantly notice there will be differences. Why? Because Bernese Mountain Dog and Golden Retrievers have different sizes and coat coloring.

Do you want to adopt a doodle? And you cannot decide between Bernedoodle and Goldendoodle? Well, we hope to give you information that will help you make an informed decision. With that in mind, the purebred Bernese mountain dog was brought to Switzerland by the Romans some 2,000 years ago. Their name derives from the Canton of Bern in Switzerland, an area where they lived.

Over the centuries, they were developed as an all-purpose farm dogs.

Bernese dogs continued to work on farms until the 1800s. At the time, there were other working dogs imported to Switzerland, and the breeding of Bernese dogs slowed. They almost went extinct.

But the breed began to grow again because of its ability to be a companion dog and a helper. Today, the dog fits ideally as a family dog. This puppy is happy to go on a long walk but also relax at home with the family. They will even try to hop on your lap despite their big size.

The result was a perfect dog that could sniff out his master’s prey, collect it without mauling, and walk for miles.

Americans fell in love with the perfect working skills of this dog, but also its grace and beauty. Nowadays, however, the Golden Retriever is more of a family pet. In fact, he is among the most popular dogs judging by The American Kennel Club.

The Poodle, which is the parent breed of all doodles, came from Germany. They can come in three different sizes, standard, miniature, and toy. Depending on the size of the poodle, you can get Standard Bernedoodle, Standard Goldendoodle, Mini Bernedoodle, or Mini Goldendoodle.

Poodles were originally bred as duck-hunting dogs. They are among the most intelligent dogs. But their big popular feature is their hypoallergenic coat type.

They do not shed, and often they pass this ability to their doodle descendants. 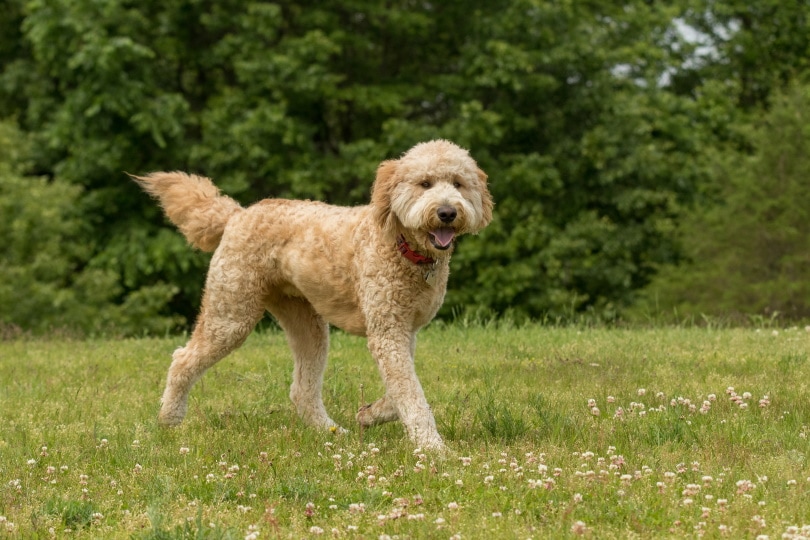 When we talk of the appearance comparison between Bernedoodle and Goldendoodle, we have to take into account the original parent. Doodles are a hybrid dog breed, but they retain the features of both parents. They get hypoallergenic coat type thanks to their Poodle parent and then features from the other parent.

With that in mind, the Bernedoodle dog is generally larger than the Goldendoodle dog because the Bernese is the larger breed.

Generally speaking, a Standard Bernedoodle weighs between 55 and 90 pounds, reaching a height of 23 to 29 inches. The Goldendoodle puppy, on the other hand, can weigh between 40 and 60 pounds and reach a height of 20 to 24 inches.

Coat colors are another major difference. Bernese mountain dog is tri-colored with black, white, and brown colors. These are the colors the doodle gets. The Golden retriever comes in white, gold, caramel, or apricot color.

Both doodle dog breeds can have either wavy or curly hair. Yet, the Goldendoodle puppy can also have straight hair.

Both of the canines are incredibly social and friendly. They are loyal companions that will follow you anywhere. If you want a friendly dog, you cannot go wrong with either of them.

These two will love to cuddle all the time with their dog owners and enjoy spending time walking and playing.

The Goldendoodle is slightly friendlier, but both are considered friendly dog breeds and amazing for families with children.

And they have also been used as therapy dogs. More on that later on.

When it comes to training and exercise, the needs of these two canines are quite similar. They are quite active dogs that need at least one hour of exercise per day to ensure a happy life. They do best with active dog owners.

As for training, you cannot find a better people pleaser than a Golden Retriever. The doodle mix is even more intelligent since the other parent is a Poodle. They might be a bit stubborn, but obedience training is a breeze with this dog.

Bernedoodls enjoy activities that require them to use their strength. Goldendoodles, on the other hand, enjoy the water and swimming more. When you get a hybrid dog breed, you expect fewer health issues. That is one of the many reasons why mixed breeds have become so popular. Yes, they have predispositions to health issues because of their parents.

But crossbreeds are generally healthier and with lower risk of health issues. For example, the Goldendoodle is predisposed to ailments like heart stenosis, glaucoma, and hip dysplasia.

The Bernedoodle, on the other hand, is prone to allergies, hip dysplasia, and eye problems.

Remember, hybrid dogs inherit a trait known as hybrid vigor. By crossbreeding, you introduce new and healthier genetics, and dogs are not interbred between the same bloodlines.

Bernedoodles have a life expectancy of 12 to 18 years, much longer than the original Bernese mountain dog.

And if you want even more years, get a smaller dog like Mini Goldendoodle or Mini Bernedoodle. Smaller animals live longer.

Which Is The Better Therapy Dog? 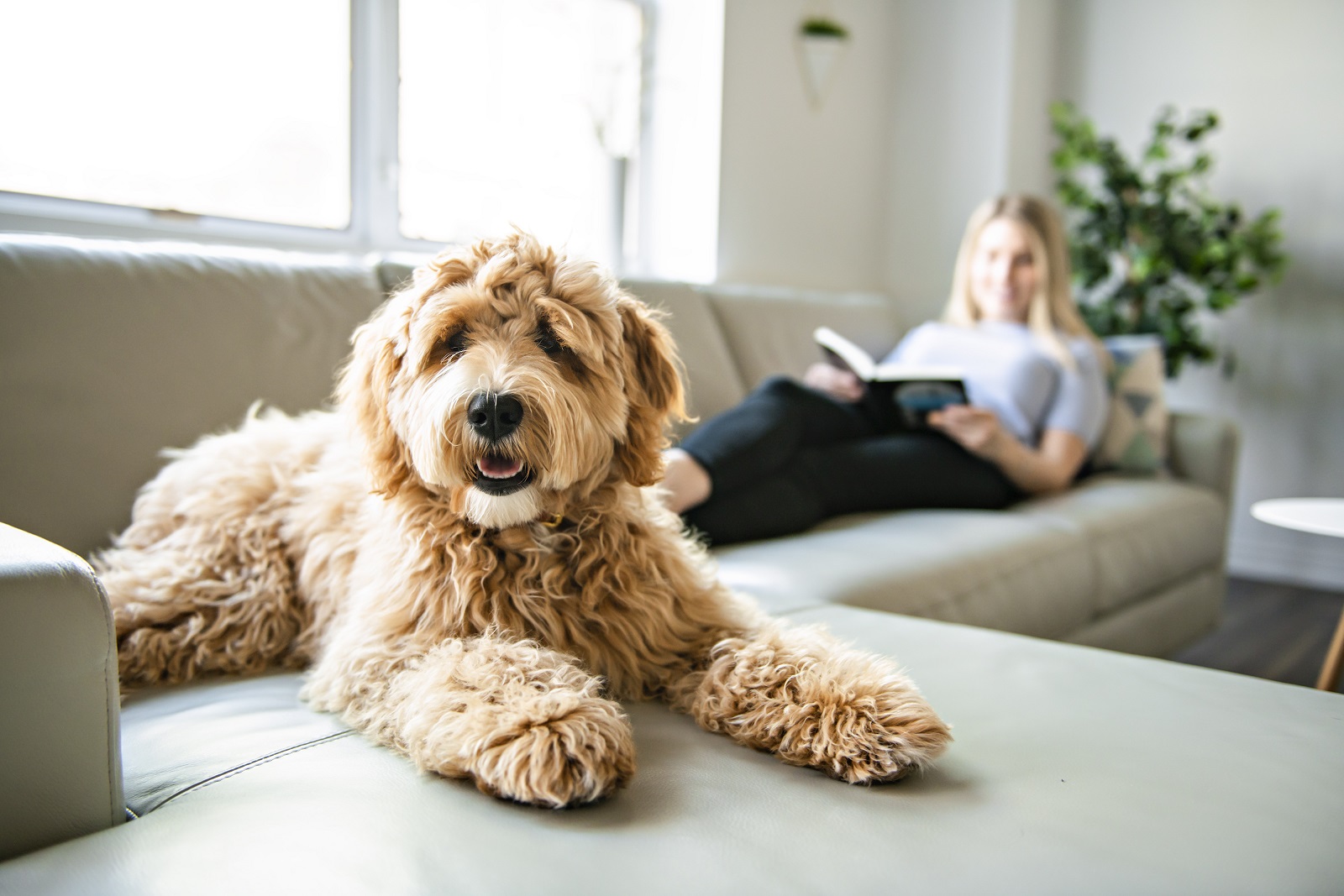 These doodle hybrids are amazing support animals. Of the two, the Goldendoodle is the better service animal. This puppy is intelligent, highly trainable, and friendly.

But Bernedoodles tend to be more aware and responsive to the emotional state of their owners.

If you get a doodle breed, you have to cut their hair every 4 to 6 weeks. For a complete haircut, schedule an appointment every 10 to 12 weeks.

But here is the good news. Because they are crosses, F1 Bernedoodle and F1 Goldendoodle do not shed. They are ideal for a family looking for an allergy-friendly dog.

Now, because one parent is hypoallergenic and the other is not, we cannot 100% guarantee your dog will be hypoallergenic. But the chance is extremely high.

Which Is The Best For You?

Both of the breeds are friendly to humans and other animals. They are highly trainable and well-behaved and shed minimally. Choosing between the two is a tough choice.

They have similar exercise needs and health issues. At the end of the day, it comes down to your preferences for the parent breed.