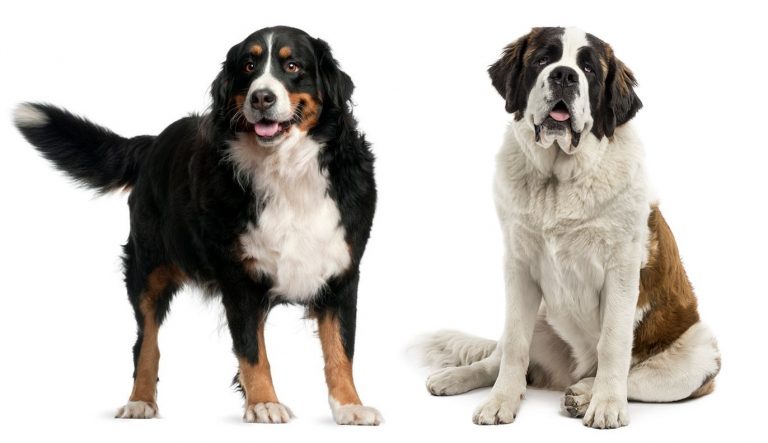 When you look at these two, there is a high degree of similarity between them. But look closer, and you can easily differentiate one from the other. For starters, the Saint Bernard is the larger dog. Body size is a standout characteristic that separates these two breeds. At the same time, they share many common features. With that in mind, let’s get to the Bernese Mountain Dog vs Saint Bernard debate.

Do you want to get one of these two as your next gentle giant? Well, we will help you make an informed decision.

Both of these dog breeds are fairly large. No matter which one you choose, the end result is based on personality, not size.

To understand the Bernese Mountain Dog vs Saint Bernard debate better, we have to look at the breed history. We will take a closer look at how they are linked to each other. Breed history also helps you understand the character, temperament, and personality traits of each dog breed.

First let’s start with the Bernese Mountain Dog, otherwise known as the Berner. This large originates from Bern in Switzerland. Compared to the Saint Bernard, he is a fairly new breed.

The area around Bern is beautiful and known for rolling pasture lands and many dairy farms. The Bernese Mountain Dog was bred to help its master drive cattle, protect the farm, pull heavy carts, and be a companion dog.

The number of dogs reduced when farmers began to favor tractors for transport. Luckily. A Swiss doctor by the name of Albert Heim restored and renowned the breed. He established a breed club in 1907 and tried to save the breed. One of these dogs was imported to Kansas in 1926, and since then, he is a popular puppy in the US.

Nowadays, he is the most popular Swiss mountain dog according to The American Kennel Club.

Saint Bernard is known for his incredible relationship with mankind. This puppy got famous when the movie Beethoven premiered in the US. He originates from the Swiss Alps as well.

But he was developed for a different kind of work. He assisted the monks of the Alps, assisting travelers, locating travelers, and carrying them back to safety. Saint Bernard could sense when avalanches were coming, and he used that sense to save lives. 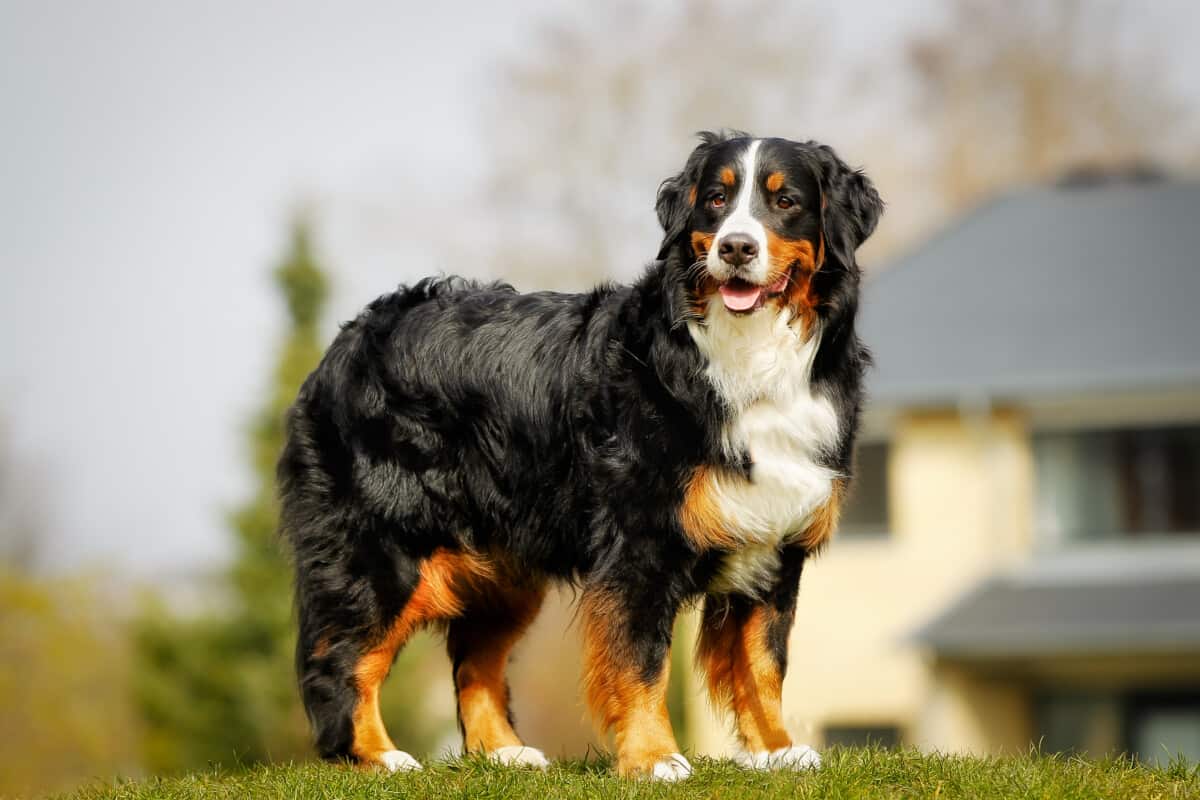 Let’s take a quick look at each of these breeds. Berner is one of the four breeds of Sennunhunds, four large dogs originating in Switzerland. Originally, they were kept as farm dogs.

All of these dogs have a similar body coloration, with the Bernese differentiating in the skull. They have a flat skull with triangular ears, round at the tips. Their other distinguishing feature is the long hair and a rough outer coat of fur. 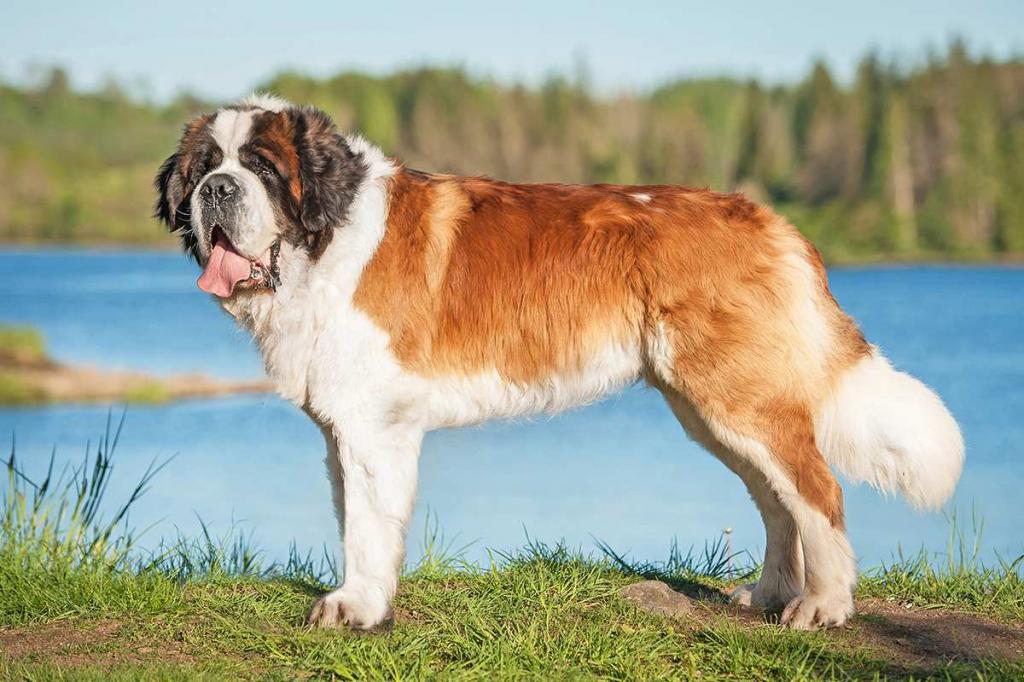 Generally speaking, this giant dog is among the largest dog breeds. Developed for rescuing purposes, he originates in Europe. More specifically, in the Alps of Switzerland and Italy.

This puppy is known for having low, hanging eyes with tight eyelids. Their tail is very long, heavy, and hanging down. Their tail was a notable feature for rescuing people who would either grab for it, or Saint Bernard would carry them on its back.

We mentioned in the beginning that one of the main differences in the Bernese Mountain Dog vs Saint Bernard debate is size and appearance.

Both of them are large, but St. Bernard is the larger dog. This large dog breed stands between 26 and 30 inches at the shoulder and weighs up to 180 pounds. A powerful dog, with a large, blocky head, he sometimes has a somber expression.

Saint Bernard has white coloring on the chest, feet, tip of the tail, and nose. The rest of the body can be in red or rust, or yellow and brown color.

On the other hand, the Bernese mountain dog stands between 23 and 26 inches at the shoulder, depending on gender. These puppies can reach a weight of 115 pounds, standing tall and strong.

The difference is this dog has the agility needed for farm work. Their face is a bit more refined, and females have a distinctly feminine quality compared to male dogs.

They have a long coat in three colors, with black being the predominant color. The chest, feet, and tip of the tail are white, and there is a rust color between the white and black areas.

Comparing their coat, the Berner is the only mountain dog with a silky and long coat. Fun fact: Saint Bernard is actually available with either a shorthaired or longhaired coat. Their shorthaired coat is silky smooth, yet dense.

Purebred Berner has a tricolor coat consisting of black, white, and rust. 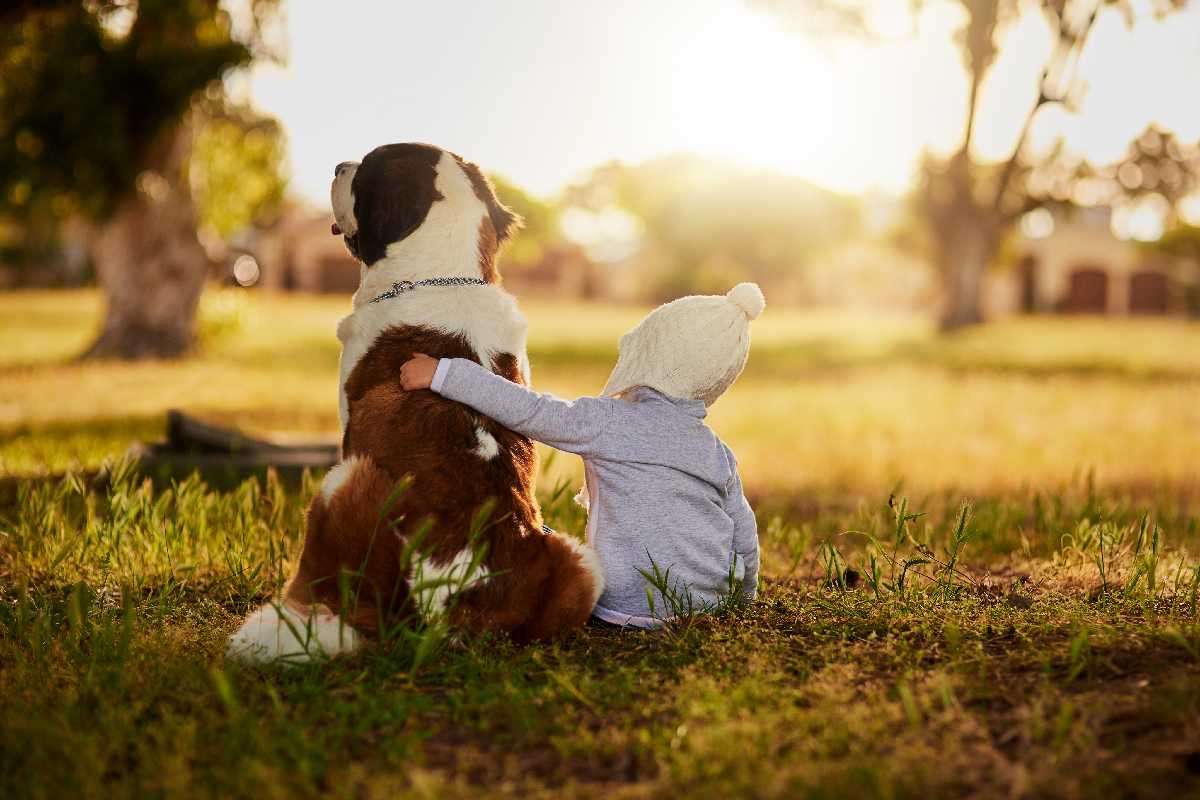 If you thought their different breed history results in different temperaments, think again. They are quite similar in their temperament and personality traits. Both of them make great family dogs. And they are known for their affinity for children. As we saw in Beethoven, St Bernard can be a nanny dog. That was even the name he was referred to in the Peter Pan stories.

The Berner loves children, but not in the same way that St Bernard does. Yet, both are affectionate and full of love for the family. Because of its loyalty, the Berner is becoming a popular option for a therapy dog.

Fun fact, neither of these dog breeds realizes their size. They will love nothing more than to squeeze next to you on the sofa. These big goofballs can be clumsy, so make sure to remove any objects that you love. Otherwise, you risk them getting broken.

The training needs of these two dogs are quite similar. Yes, they are calm and gentle, but they are also giant breeds. So, make sure to start training and socialization at a young age. Otherwise, you might get overpowered when the dog becomes excited.

The good news is that they are eager to please their owner. You might think of Saint Bernard as a bit more stubborn if you watched Beethoven. But that is not the case.

These two respond quickly to positive reinforcement dog training. Prospective dog owners should socialize these two from a young age. It will teach them that there are different situations and environments.

This might come as a surprise, but large breeds can be fearful as well. And you will have a hard time managing a fearful large dog. 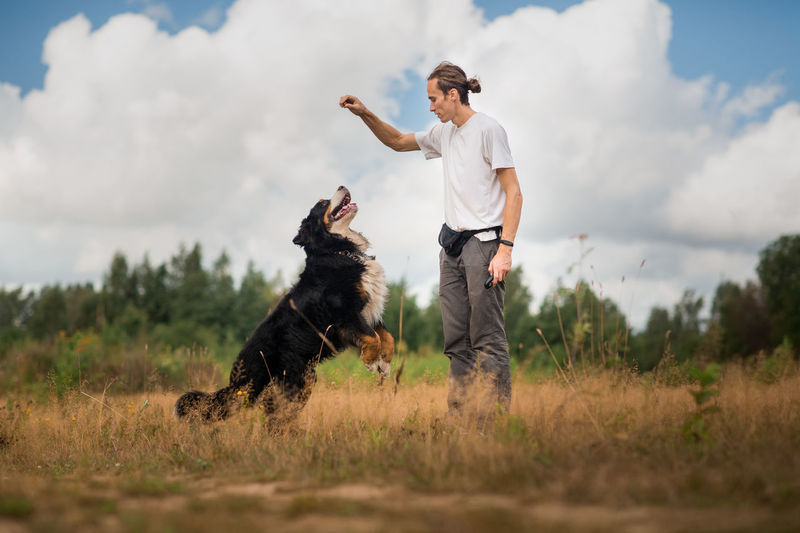 Because Berner was a farm dog, he is more energetic compared to Saint Bernard. He needs an active family. The Bernese dog needs more exercise and more intense exercise. You might also need to provide more interaction and mental stimulation.

Saint Bernard is notorious for having lower intelligence than most dog breeds.

Speaking of exercise needs, Saint Bernard needs between 30 to 45 minutes of exercise per day. And he prefers leisure strolls around the block.

On the other hand, Berner needs more activities and at least 60 minutes of exercise per day.

So far, we talked about the positive sides of owning either a Berner or a Bernard. But we have to mention the challenges as well.

Being large dogs, they are susceptible to quite a few health issues. For starters, bloating can be a sudden and life-threatening condition. Make sure to familiarize yourself with the symptoms of bloating.

Of course, they are also susceptible to hip dysplasia and elbow dysplasia. The Berner has a higher risk of von Willebrand’s Disease, while Saint Bernard has a high risk of eye problems.

You might be surprised, but the larger dog is the healthier one here. Saint Bernard has an average life expectancy of 8 to 10 years. The Bernese mountain dog, on the other hand, lives on average between 7 to 10 years.

What Is The Best For You?

No matter which one of these two you will get, you can make sure they will turn heads in the street. They are gorgeous dogs that will steal your heart, but also the hearts of everyone else in the family.

These two are related, meaning they are similar in many ways. The differences are subtle, and it depends on what you want.

If you want a more active dog, the Bernese is the better choice. But if you want a better family pet and a guard dog, go for Saint Bernard. Fun fact: he is not your prototypical guard dog, but strangers will see a gigantic animal and will run away.