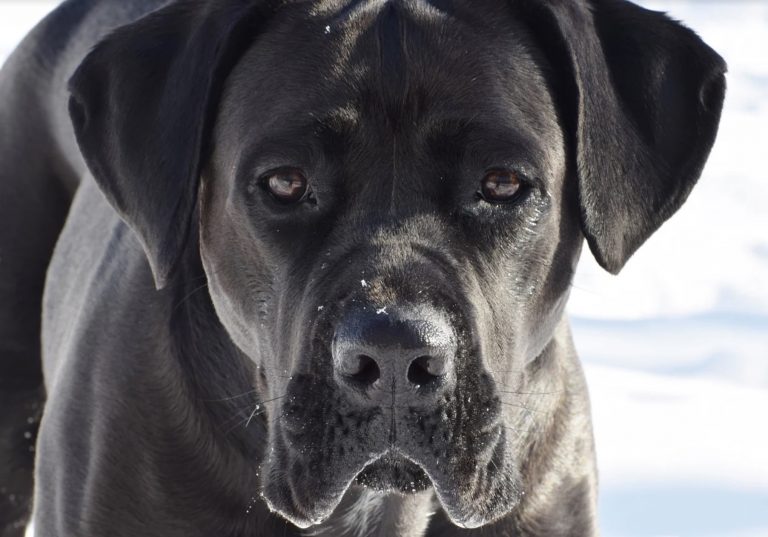 Cane Corso is an ancient breed famous for its protectiveness and imposing appearance. But this dog breed has many more traits that may surprise you. How much do you know about this ancient dog breed?

Let’s talk about some Cane Corso facts. It is a mastiff large breed. Muscular, full of strength, and almost regal-looking in stature, this pup walks with confidence and assurance. You cannot mistake Cane Corso Italian mastiff.

There are many reasons why the American Kennel Club puts this dog among the Top 30 most popular. With that in mind, let’s take a look at some Cane Corso facts.

The name comes from a Latin word

The Cane Corso name comes from the Latin word for “bodyguard dog” or “robust dog”. If you have more than one pup, you have Cani Corsi.

Standing about 28″ at the shoulder, the large dog can weigh more than 110 pounds. But size is not the only thing that makes the breed look formidable. These dogs also have a large head with an imposing expression.

We said before that Cane Corso is an ancient dog breed. It dates back to ancient Greece when the pup was a warrior powerful dog. When the Romans conquered the Greek Islands, legionnaires brought the dogs back to Italy.

They bred them with Italian dogs, and over the centuries, the Cane Corso became a well-rounded farm dog, guarding property and hunting.

The Legend of Cane Corso

Going back to Greek mythology, the Cane Corso legend starts with Achilles, the famous warrior that led the Greek army during the Trojan War. Following the fall of Troy, Greeks settled down in the region of Epirus, where Achilles grandson inherited the kingdom.

As farmers with huge flocks of sheep and goats, they had to develop a formidable guard dog that will look over the farms. Many historians believe that dog was the ancestor of the Cane Corso. Looking at Greek art and sculptures, you can find a similar dog in Ancient Greek history.

The Cane Corso Italiano is a very loyal and affectionate dog. But there is a catch. That works only with its own people. Do not expect Cane Corso to become a best friend of every person or dog they meet.

They are indifferent to other dogs and people not in their family. As loyal and protective pets, they will guard their owners and home.

They are also sensitive to his people. They are attuned to your mood and feelings. It is a relationship a dog owner can describe as one of subtlety and depth.

Cane Corso is a talkative dog. But he doesn’t bark. As a vocal dog breed, you can expect snorts, snuffles, howls, and a roo-roo sound.

Our dogs might not speak the human language, but they communicate with us. And Cane Corso does this regularly.

You have to train them not to chase

This dog breed has a natural instinct to chase small animals. As a future Cane Corso owner, you have to train them early on and remain strict on prevention. Do not allow them to chase and kill small animals.

If you start early on, you can train their instinct and high prey drive.

Even though Cane Corso is a large dog breed, they need rather average maintenance. Brush them once per week to keep their short and shedding fur from building up.

Do not forget to clean your dog’s ears and trim its nails. As far as bathing, your pet needs a rare bath once every six or eight months.

Did you know that this massive mastiff was trained to hunt apex predators back in the day? They have a powerful jaw and muscular frame that helps the dog to hunt animals.

Looking at the Italian mastiff dog breed, you might think they are lazy and slow. But Cane Corso can reach 32 miles per hour speed.

Many dog breeds have made it to the big screen. Some of the most popular dogs in television and film include Jack Russell Terrier, German Shepherd, and more. Disney cartoons often have a dog breed.

How many do you know? Well, for starters, the hunting dogs Ramsay used in Game of Thrones were actually Cane Corso. The popular breed also makes an appearance in shows like Atlanta and Blacklist.

In the 2014 comedy movie, Save the Date, Cane Corso is a loving and affectionate puppy.

Used for entertainment in ancient Rome

We talked about how the Cane Corso breed was used as a guard dog in Ancient Greece. And then the Romans took the dog back to Italy. There, they were used for blood sports and other forms of entertainment. They were used in pit fights with bulls, tigers, lions, and other dogs.

Here are more Cane Corso facts for you. There are two types of Corsos. They might have two separate distinct bloodline. The Traditional Cane Corso dog breed refers to dogs that descended directly from the Italian Corso that came to the US in the late 1980s.

They represent a true continuation of the old Italian bloodline. They have a bigger frame, larger bones, and are more muscular.

The Non-Traditional Cane Corso was developed using popular dog breeds. So, they began using Great Dane, Rottweiler, Boxer, and other dogs. As a result, this breed shows a much wider variance when it comes to temperament and physical traits. For starters, they are more agile and skinnier than the original Cane Corso.

Cane Corso puppy can come in different coat color and coat pattern. The most obvious is the black Cane Corso. This dog has a black shiny short coat. Black absorbs heat better.

But there is also another type, Formentino Cane Corso, which has a blue fawn color pattern. It is an Italian word for “fermented wheat”.