Cane Corso vs Mastiff – Which Is The Better Guard Dog? 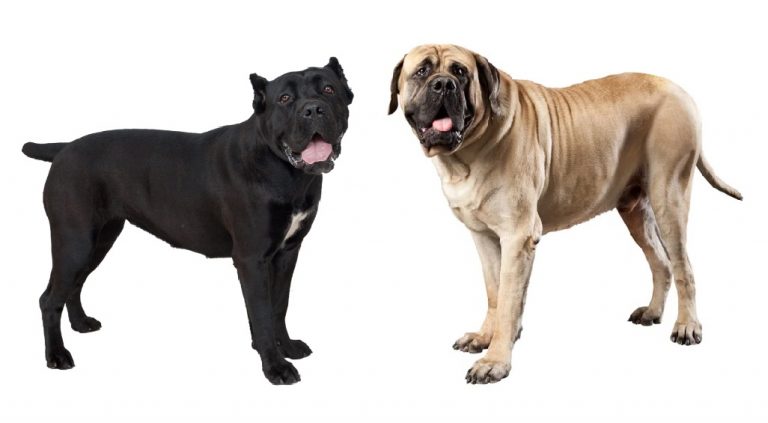 When you think of a guard dog, you think of a large, scary-looking dog, right? Well, you have come to the right place. Today, we will talk about Cane Corso versus Mastiff, a worthy discussion when you are looking for a large dog breed.

Now, these two are great guard dogs, and they are quite popular for what they do. That doesn’t mean you cannot have them as a family pet.

There is a reason we call them gentle giants.

If you want to decide between two large breed dogs, first you have to look at their history. In this case, they were both bred for the same purpose. Their breeding history tells you a lot about personality, trainability, and health.

First, let’s start with the Mastiff, otherwise known as the English Mastiff. This dog dates its history back to Roman Empire. During the Roman invasion in 55 BC, Romans encountered these dogs that protected the British Isles. Now, they were not the English Mastiffs we know today.

But they were the ancestors of the Mastiff. Julius Caesar was impressed by their beastly look and took them back to Rome. There, they fought in battles against gladiators and other animals.

Yet, originally, they were guarding dogs. When blood sports became illegal and fell out of favor, these loving and affectionate dogs found their place in the home. Breeders subdued their fearsome qualities, but they still can be used as guard dogs.

Cane Corso and Mastiff have a similar history in the way they descend from dogs in the Roman era. Cane Corso descends from the large Roman war dog. But they were not used for fighting. Instead, they were used as versatile farm dogs. This large dog herded sheep, drove cattle, pulled carts, and protected the family and property.

Following the industrialization era, the dog breed was almost extinct. There was no need for a farm dog. But, Cane Corso enthusiasts in Italy managed to revive the breed, using its cousins like Neapolitan Mastiff and Italian Mastiff.

The first Cane Corso dog made its way to the United States of America in 1988. There, his popularity grew.

It is worth noting that both breeds are recognized by The American Kennel Club. 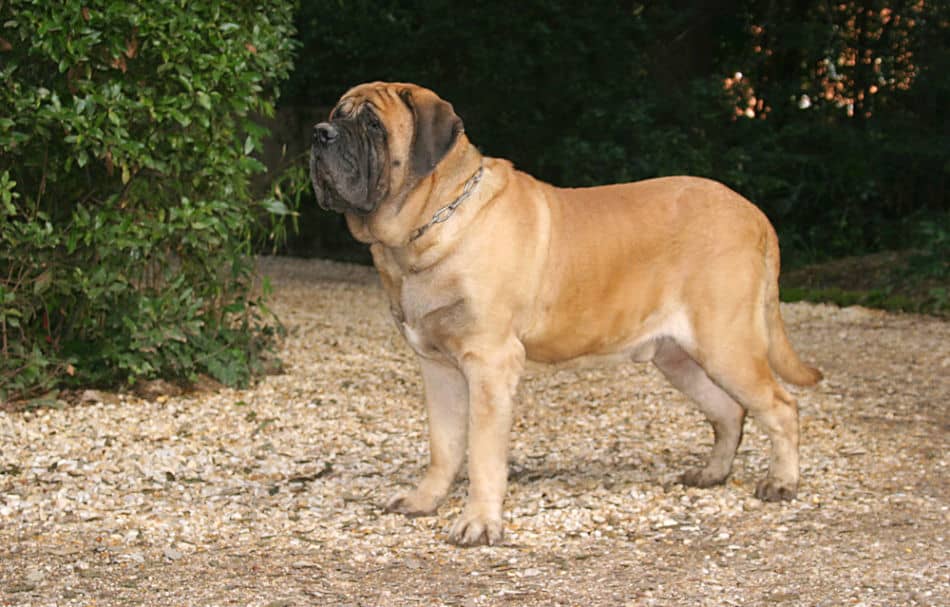 When you put them side-by-side and look at a breed comparison, you instantly notice that English Mastiffs are larger. They are among the largest dog breeds. Yes, the Italian Cane Corso is a large breed, but nothing compared to the giant Mastiff. An adult male Mastiff can weigh two times as much as the Cane Corso.

Standing 31 inches tall and weighing up to 230 pounds, the Mastiff is a giant breed. The sheer size of the dog should be taken into consideration when you want to get a new pet. You might not have the space needed for this mighty giant dog.

Cane Corso is a large breed, but it stands between 24 and 28 inches and weighs up to 110 pounds.

Speaking of coat color, options vary in English Mastiffs. They do have a double-layer coat, and it can be long or short. Accepted colors by The American Kennel Club include brindle, fawn, and apricot.

Cane Corso breed has four standard colors and a large mastiff-like head. The most common color is black, and other options include brindle, fawn, and grey. There are also variations, meaning bi-colored dogs are accepted. You can also notice white patches on the upper chest and lighter coloring around the muzzle.

We also have to note that traditionally, Mastiffs have long ears that are not docked. Cane Corso’s ears may or may not be docked. 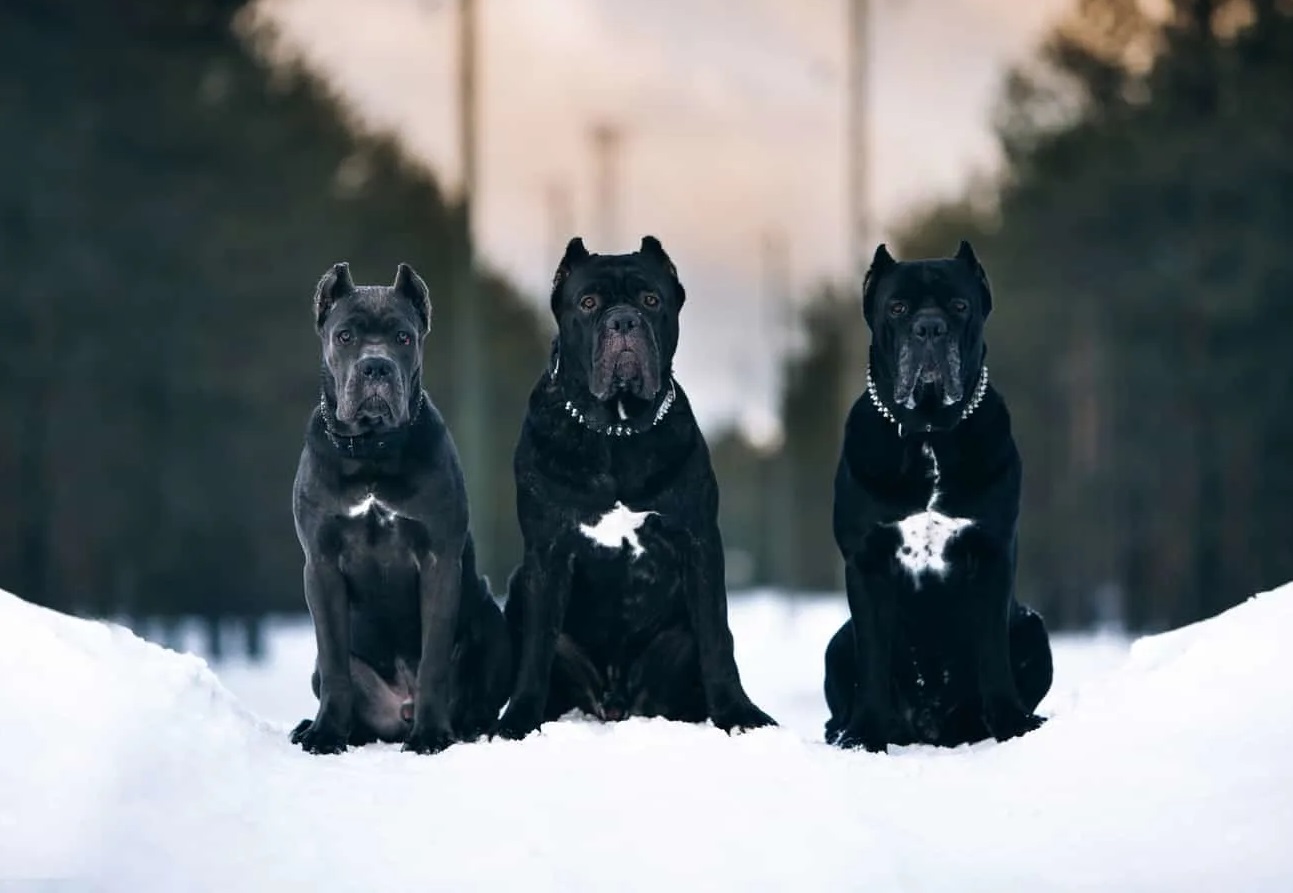 Now, when it comes to any debate, including Cane Corso versus Mastiff, temperament plays a large role. These two are similar, yet different in their personality traits. Both love their family, and despite their big appearance, they are sweethearts.

But they do not extend their love to strangers. Bred to be guardians, they are aloof with outsiders. It is a common trait they share with their ancestor, the Neapolitan Mastiff.

The difference is in how they approach strangers. Mastiffs will stay calm and collected, and bark only when needed. They might step back and keep an eye on their family. This courageous dog will not hesitate to protect its family if needed.

The Cane Corso breed is different in this approach. They will step right next to their family in the beginning and stand in a guarding position. This is why many people call them bodyguard dogs. In some cases, they might be overly protective, but it is a natural instinct.

Then, there is another difference, and that is intelligence. While both dogs are quite stubborn, Cane Corso Italiano is intelligent, while the Mastiff is not so intelligent. That not-so-intelligent personality and stubbornness are part of his charm.

If you want a dog that will do some tricks, neither of these might do it. They learn the basic commands like sit, heel, and lie down, but not some complicated ones.

But they are fun and love to play with their family.

We said these dogs are stubborn. Well, that means that training will be a challenge. Obedience training is a must, the same as with socialization. With proper and early training and socialization, you can solve their guarding instinct and overly protectiveness around strangers.

But you cannot expect 100% obedient pooch from these breeds. Because of their stubbornness, they are not the dog you want as a first-time dog owner.

Of the two, English Mastiffs are the less dominant dogs. Because of their protective nature, socialization with other animals, dogs, and the environment is a must.

And it is a lifelong commitment because every time you step outside with a big dog, people will look at you. With a Cane Corso dog, you need dog treats and human praise for positive reinforcement. Mastiffs will only look for food as a reward. 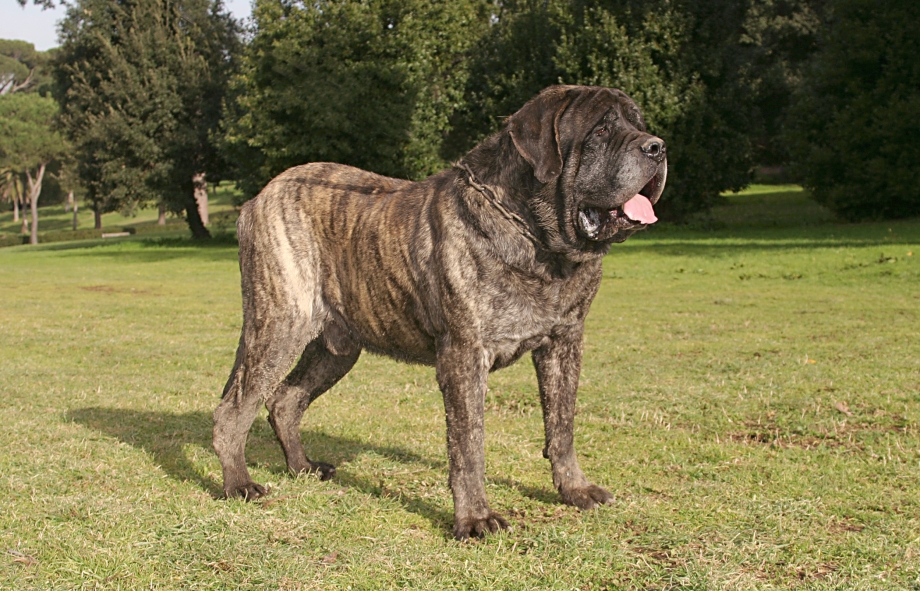 The good thing about large dog breeds is that they do not need as much exercise. Their big body will quickly tire them out.

With that in mind, the English Mastiff needs a moderate amount of exercise, between 30 and 45 minutes per day. Do not overexercise your Mastiff dog since it can cause joint problems. Think of the big body they need to carry. A good walk is all they need.

If you own Cane Corso, you need a bit more exercise, but not like a German Shepherd or American Staffordshire Terrier. Say, 30 to 60 minutes is more than enough. One thing to note, because they are more intelligent than Mastiffs, they need mental stimulation as much as physical exercise.

Mastiffs also have a powerful bite force, generating up to 552 PSI. They are an assertive breed, and their bite force can easily crush bones and break teeth.

Remember, these dogs were used for fighting at one point. Their bite force is to be expected. 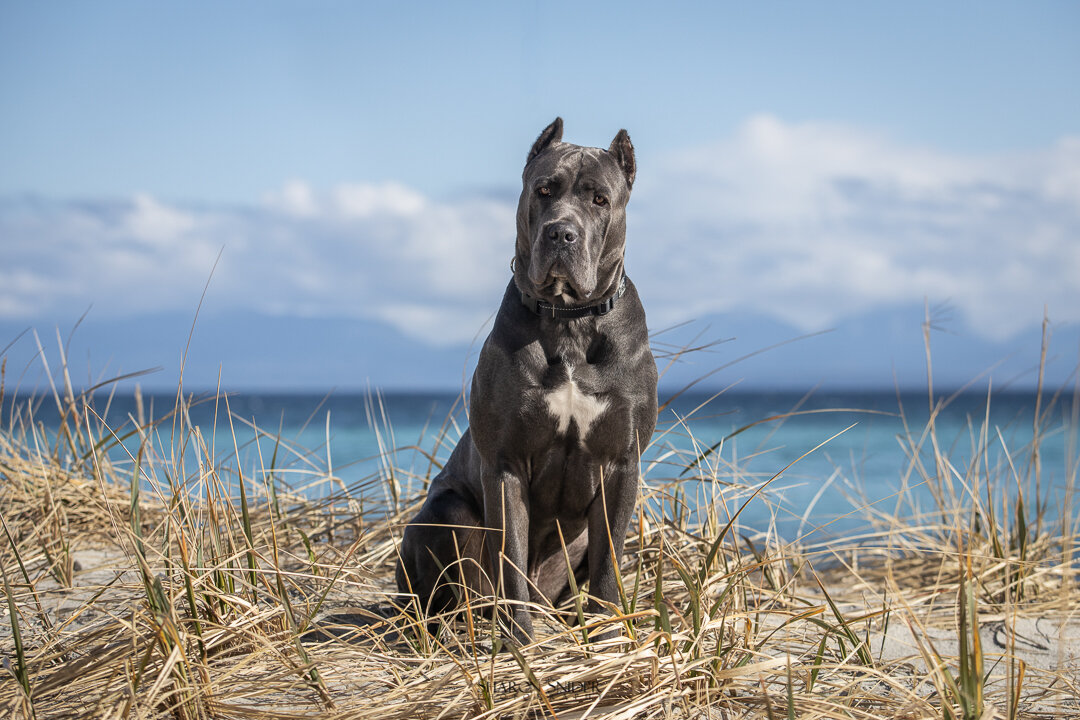 With Mastiffs, that means hip and elbow dysplasia, bloat, gastric torsion, and even cancer. If you own a Mastiff, be ready for regular visits to the vet and higher bills.

If you want a dog that will live longer, opt for Cane Corso. Giant dog breeds like Mastiffs, have a lower life expectancy. Generally speaking, they live between 8 to 10 years on average.

Cane Corso, on the other hand, can live between 10 to 12 years. Yet, some dogs live longer than that.

Which One Is Best For You?

At the end of the day, you are getting a working dog no matter what you choose. This guardian and protector will be there for you. But the question is whether you have enough space for the giant Mastiff, or you will be good with Italian Cane Corso?

Both dogs need an experienced owner and thrive in a family that will provide affection. They are good with kids, but only when socialized and trained properly. After all, their instinct is to protect, and that extends to the children.