Cane Corso vs Rottweiler – Which Guard Dog Is Your Choice? 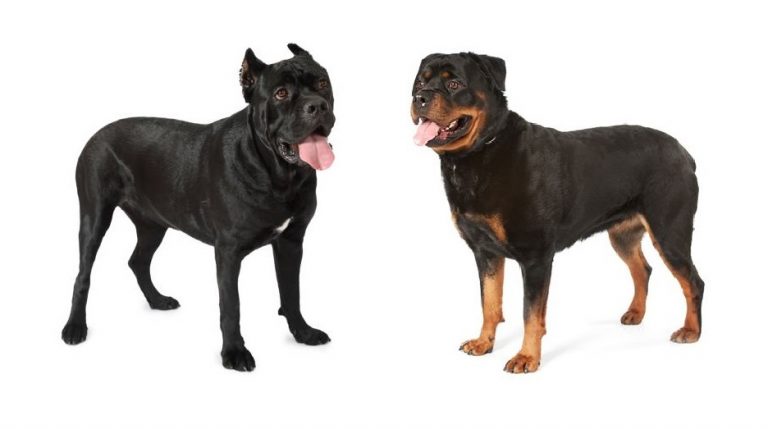 When you compare Cane Corso and Rottweiler, the first question you need to ask is what type of guard dog you need. These two friendly giants are quite similar in their working purpose but very much different in personalities, appearance, and other factors.

Do you try to decide between these two for your next canine companion? Well, do not worry. You have come to the right place.

We will take a look at every aspect of the Cane Corso versus Rottweiler breed comparison, and help you make an informed decision.

While both are similar in size, they are quite different. They are two large, working breed dogs that actually are related. Yes, the Cane Corso dog breed and Rottweiler dog breed come from the same descendant, the large Mastiff.

In the end, it comes down to which puppy suits your lifestyle, but you have to be informed to make that decision. 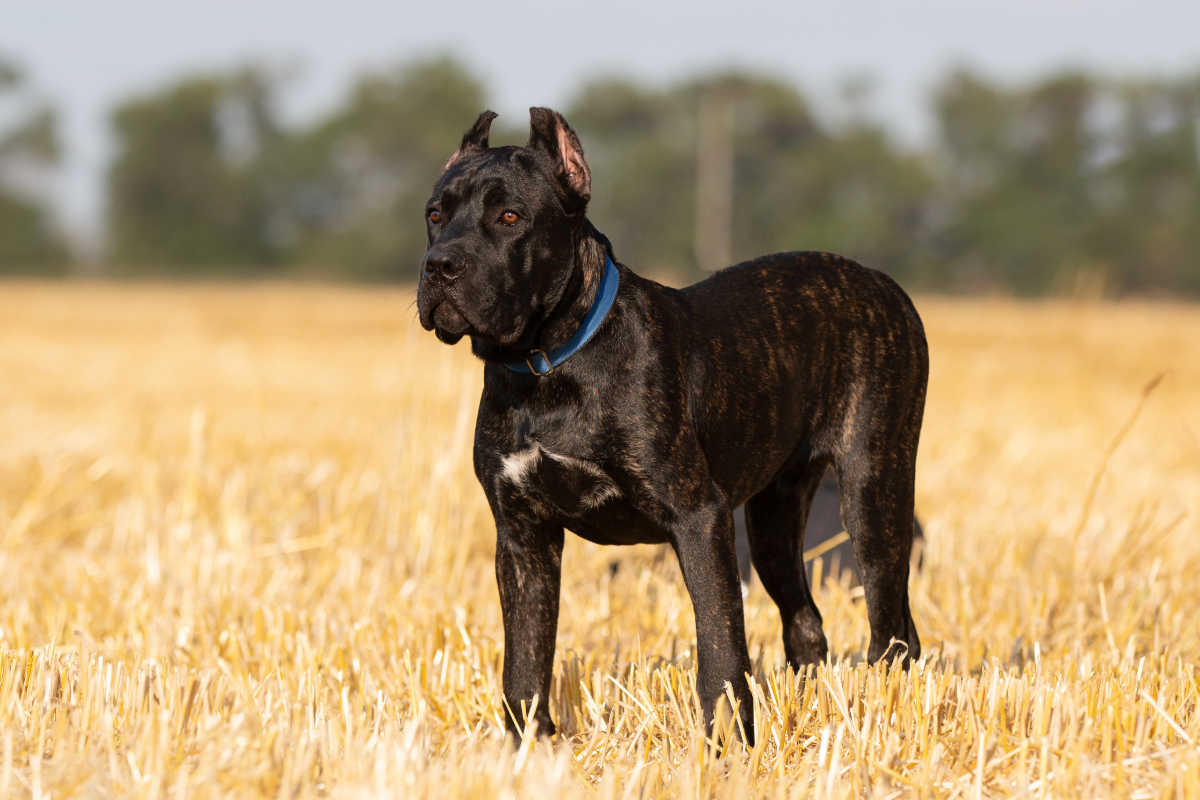 The first thing we need to look at in the Cane Corso and Rottweiler dog breed comparison is breed history. By looking at the history, we can understand the temperament and personality traits of each breed.

First, the Cane Corso. This dog’s history dates back to Ancient Rome and beyond. Historians believe they descend from the extinct Greek Molossus dogs. They became known as Roman pugnaces, dogs used for attacking wild animals.

They are related to the Rottweiler because they descend from the same dog, Neapolitan Mastiff. The Cane Corso is sometimes referred to as the Italian Mastiff.

Centuries passed, and the Cane Corso breed settled into farm life and became part of the landscape. At one point, Cane Corso was in danger of extinction. But thanks to a revival in the 20th century, the breed was back and became an essential part of Italy’s identity. In 1983, Italy had its first club, The Society of Cane Corso Lovers. 13 years later, the dog breed was recognized by the FCI.

Now, let’s talk about the Rottweiler breed. This dog descends from drover dogs, or cattle-driving dogs left by the Roman legions in Germany. They originate in the city of Rottweil, Germany. Initially, their job was to protect cattle and other livestock. While this dog is no longer a herding breed, they still participate in some herding events.

Rottweilers can do well with other herding dog breeds like the German Shepherd, the Border Collie, and others in the field. How are they related to the Cane Corso? Well, the Rottie also descends from the Italian Mastiff.

During World War I, the Rottweiler grew in popularity. The demand for police dog breeds led to the revival of the breed, and during WWI and WWII, the Rottie was used as a police dog, guard dog, and messenger dog, and worked in many other roles.

In April 1915, the first International Rottweiler Club was formed in Germany. By 1931, The American Kennel Club recognized the working dog breed. We established that these two fall into the large dog breed group. Both of these are large dogs, but the physical similarities end there.

The Cane Corso dog is muscular, standing between 24 to 28 inches and weighing up to 110 pounds. This breed has short hair and is prone to shedding. Coat color is available in four different options. As a descendant of the Mastiff breed, Cane Corso has a large head, long ears, and prominent lower jowls.

Rottweiler dogs are strong, large dogs with muscle to spare. They are stockier and have thick legs, and when you watch them side-by-side with Cane Corso, they might look smaller. But are heavier.

Male Rottweiler stands between 24 and 26 inches tall, but weighs 125 pounds on average, a bit more than Cane Corso.

They also have a large, mastiff-like head and prominent lower jowls. Speaking of their coat color, you can notice markings like spots or eyebrows above each eye, a mask below the nose and over the mouth, a patch on the neck, and an underbelly. 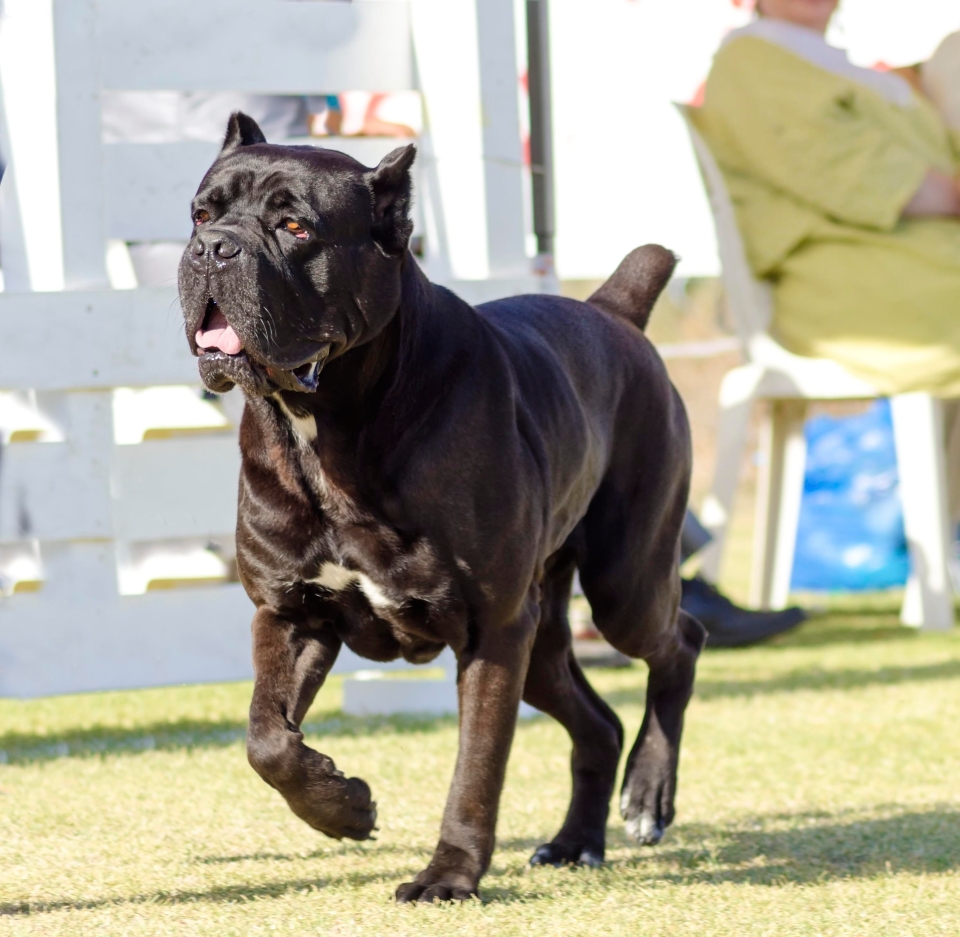 Some people love the temperament of the Cane Corso, others hate it. They are brave, confident dogs, willing to take any challenge. But sometimes, that may be associated with aggression. Yet, it is always warranted when the dog is trained and treated properly.

This is why they are suitable only for an experienced dog owner who can turn them into a mannered dogs. Yet, remember, they will retain their guard dog instinct. Loyal and kind to the family, they will bark and defend when and if needed.

The good news is they are surprisingly quiet and will bark only in extreme situations. They are not as cuddly as other companion pets. They are dependent on socialization.

Rottweiler, on the other hand, is called the Gentle Giant. This mean-looking dog is actually cuddly, sweet, and affectionate. They are aloof and calm, yet courageous and confident.

While many associate Rottweilers with aggressive behavior, he is very social and bubbly. They love being around other people and animals. The difference between Cane Corso and Rottweiler? You can have a Rottweiler sit in your lap, cuddle, and play, while Cane Corso will not do that.

For a family that wants a compassionate watchdog, the Rottie is amazing. It will let you know someone is nearing the property, but they will not act aggressively or attack unless prompted by that person.

Despite their large size, they are quite good with children. Rotties do not have a high prey drive and love playing with other dogs.

Both of these dogs are territorial, with the Rottie being more vocal as well. 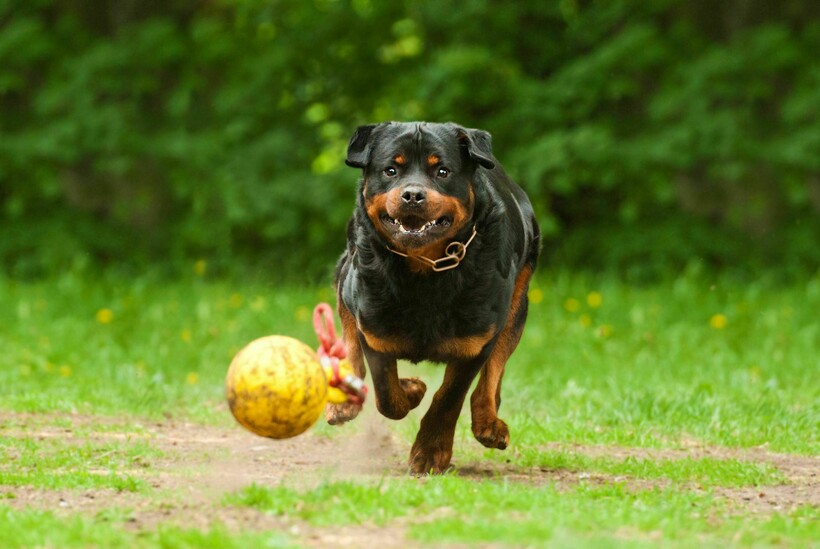 Rottweiler puppy is easy to train thanks to their high intelligence. Considered among the easiest dogs to train. Why? Because they are working dogs that love doing training as a specific job.

Yes, this puppy can be stubborn at times, but he will easily learn new commands in a few repetitions. Because of their huge size and muscular body, training is a must. Make it easy by doing some positive reinforcement training. Be consistent, and your puppy will respond to your commands.

Cane Corso puppy is also easy to train, but this dog is not as smart as the Rottie. Training is a must to get a respectful and obedient guard dog.

Same as Rottweilers, they can be stubborn at times because of their independent streak. Of the two, the Cane Corso has a more independent nature.

Never be aggressive or negative when training a Cane Corso. They will stand up for themselves if they feel they must. Positive reinforcement is the best path to success.

Both of these dogs are working dog breeds. They need to do something to burn their energy. Walk them regularly and provide some mental stimulation.

Otherwise, they might get bored and get into trouble. Of the two, the Rottie needs more exercise, between 45 and 60 minutes per day. You can do well with 30 to 45 minutes of exercise with a Cane Corso. 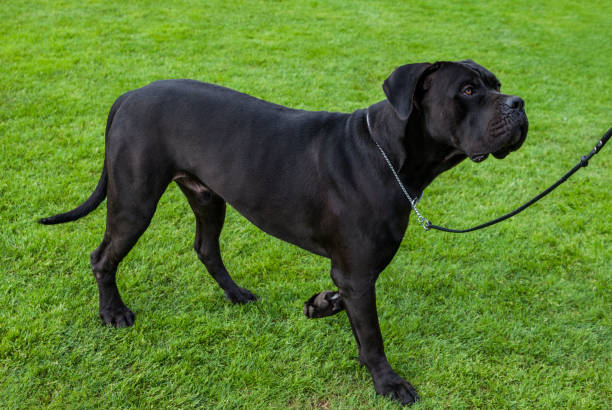 The general rule of thumb is that large dogs are usually more prone to health issues and risks. Yet, the Cane Corso is relatively healthy compared to other giant dog breeds.

They do suffer from some issues like hip dysplasia, idiopathic epilepsy, Demodex mange, and eyelid abnormalities.

Rottweilers, on the other hand, are less healthy. They are in the group of breeds that veterinarians vouch against.

Of the two, Cane Corso lives more. Their life expectancy is between 9 and 11 years. According to The American Kennel Club, the Rottweiler has a life expectancy of 9 to 10 years. Their large size compared to many health risks contributes to the low average lifespan.

Which Is The Stronger Dog?

Rottweiler, on the other hand, has a bite force of 328 PSI.

Both of these dogs are bulky canines with a guarding history. They may look scary but are quite loving and affectionate to their dog owner and closer family.

They thrive on socialization, and with proper training, they will not show an ounce of aggression. Their big size makes them unsuitable for apartment living. They need space to play.

Of the two, the Rottweiler is the better dog if you have other pets and young children. They will act as watchdogs and guard dogs, but Rotties are cuddly and have a low prey drive. Cane Corso has a higher prey drive, making him the better guard dog.