King Shepherd vs German Shepherd – How To Spot The Difference? 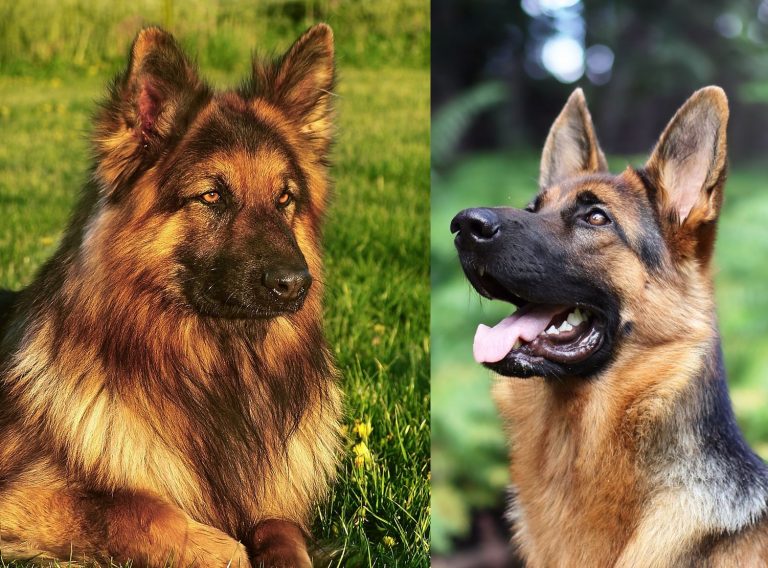 In some cases, King Shepherds can be classified as giant dogs because they can weigh over 100 pounds. We know the German Shepherd dog breed is one of the most popular in the world. The American Kennel Club has him in the top 5 most popular dog breeds for years.

But what about other shepherds? We have talked about Dutch Shepherd and Belgian Malinois before, and now, we will talk about the King Shepherd dog.

This dog was bred as a mix between German Shepherd, Alaskan Malamute, and Great Pyrenees dog.

When you look at the King Shepherd’s appearance, you might be thinking this is a bigger and long-haired German Shepherd. But that is not entirely correct.

King Shepherd puppy is a relatively new breed of dog that is still developing. It is a hybrid, and as such, it is not recognized by The American Kennel Club.

And while the AKC doesn’t recognize it, The American King Shepherd Club recognizes the breed and it is the original club of the breed. We can trace the history of this dog breed to 1991 when American Shelley Watts-Cross and David Turkheimer developed it. 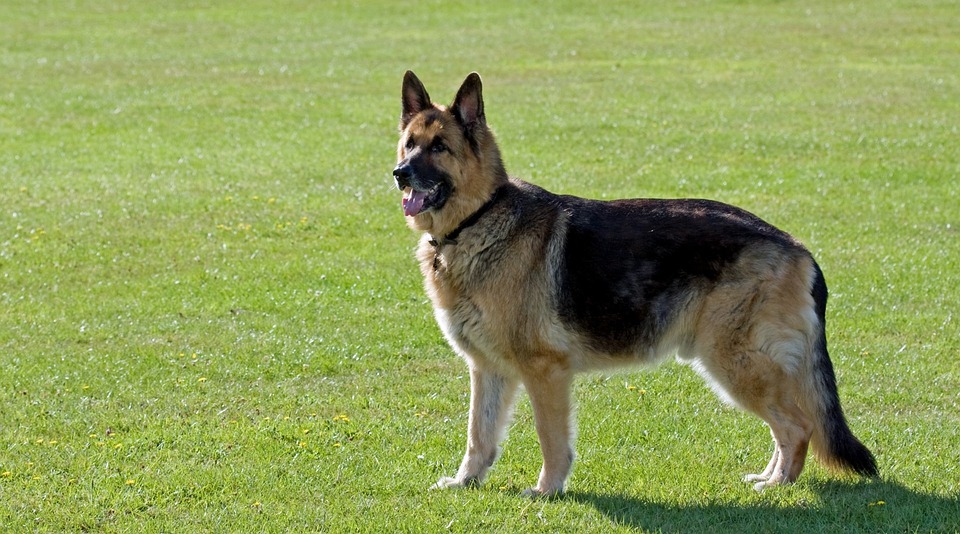 The purebred German Shepherd dog was developed by Captain Max von Stephanitz from a mixture of local herding dogs in Germany. He was not bred for looks, but for intelligence and excellence in the field.

Because of its intelligence, the dog could easily transition to other jobs as sheep herding became less common. Nowadays, the German Shepherd serves as a police dog, military dog, search and rescue dog, service dog, and assistance dog.

German Shepherds were not as popular as they are today. After World War I and World War II, people in the US wanted nothing that came from Germany. But thanks to Hollywood movies and television shows, German Shepherds became one of the most popular dogs in the United States. 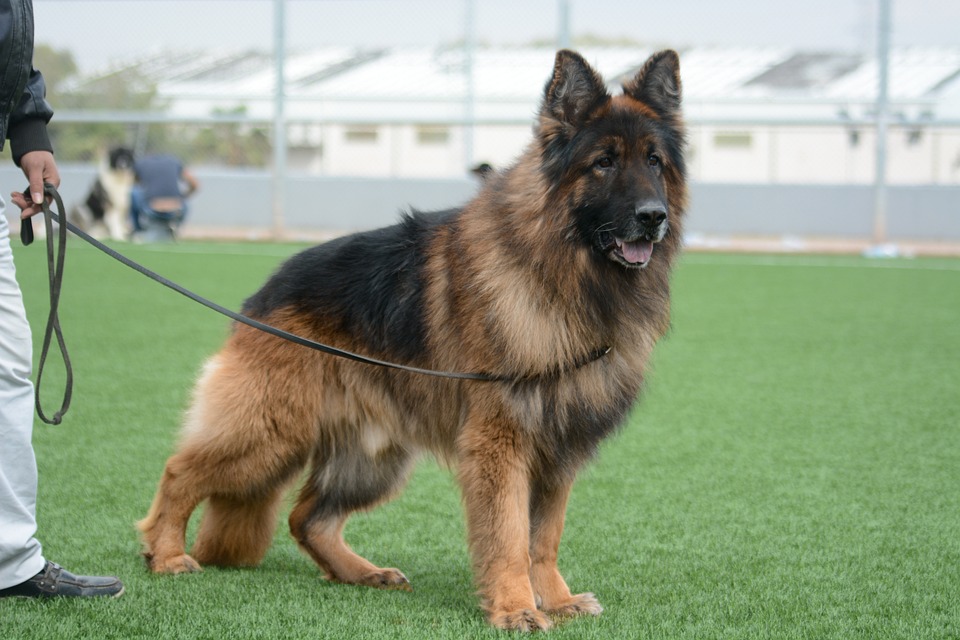 As we said before, the King Shepherd puppy was first bred in the 1990s by David Turkheimer and Shelley Watts-Cross.

Their idea was to create a larger and healthier version of the German Shepherd. They crossed purebred German Shepherds with Shiloh Shepherd, another hybrid not recognized by the AKC.

Similar to the original German Shepherd, King Shepherd can also work as a police dog, service dog, and search and rescue dog. And because of its Alaskan malamute gene, this dog can also help with cart pulling.

But it cannot participate in AKC shows because it is not recognized as a breed. Do not worry, the American Rare Breed Association and the American King Shepherd Club recognize the breed and set a breed standard.

Besides the purity of their genes, appearance is the main difference between this two. King Shepherd is a true large dog.

When you look at King Shepherd’s appearance, you easily notice how big he is. He might be called extra-large or giant dog.

King Shepherds also look different. They have a thicker and longer coat. They always have dark coloring on their paws, noses, and fur. GSDs, on the other hand, have more variations in the fur and pink coloring on the paws. The German Shepherd also has lighter fur overall. 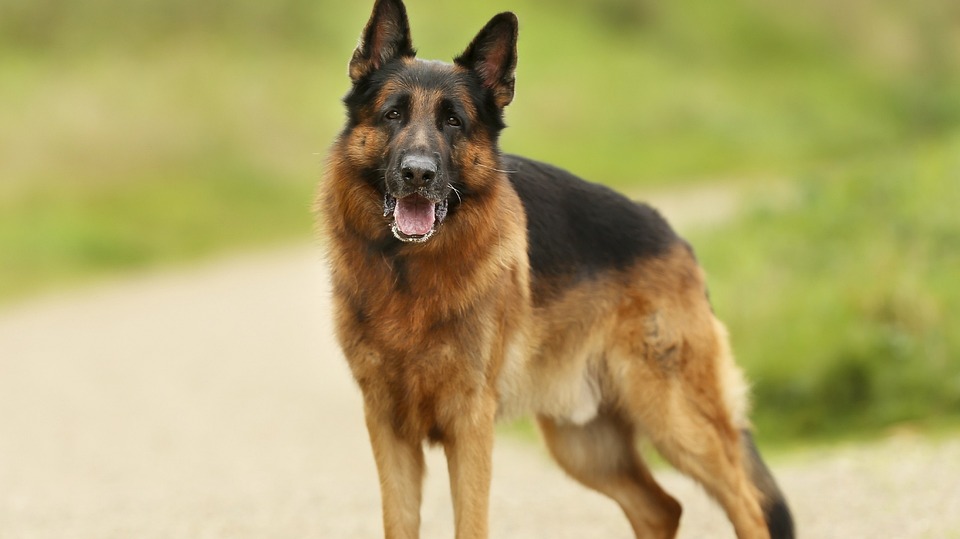 Let’s move on to temperament and behavior comparison. Now, while King Shepherd has some of the personality traits of the German Shepherd, he was bred for a more family-oriented environment. He was not bred so much for work and herding purposes.

King Shepherds are also more stable when it comes to their overall behavior. They will not approach strangers with kindness, but they will not enter a protective mood as well.

Because King Shepherd was bred for a family-oriented environment, he has a slightly lower energy level. They are gentle giants that make great family pets.

The German Shepherd is a high-energy dog. You have to remember his herding history. This dog was bred to be a herding dog that could run all day with livestock.

We said these dogs are energetic and require long, brisk walks daily. When it comes to training, they respond similarly. Because they are loyal, devoted, and intelligent dogs, they will love working.

Here is another thing to remember. Their minds are always active. These puppies crave challenges and want to have their minds occupied.

So, besides physical exercise, you have to provide mental stimulation as well. You can use this as an advantage for your training methods.

These dogs respond well to obedience training. When asked to heel while walking, it soothes their energy and keeps their mind active and engaged. 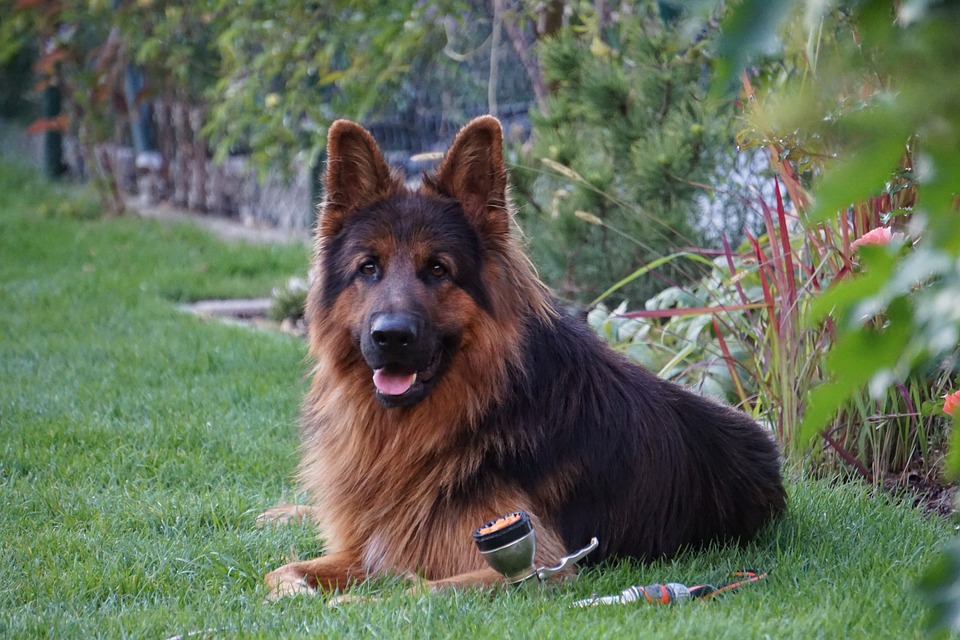 The King Shepherd puppy was bred with health in mind. Breeders wanted to get a healthier version of the original shepherd. As a general rule of thumb, mixed breed dogs are less prone to health issues.

They have inherited some of the issues linked to German Shepherds, like hip dysplasia, elbow dysplasia, bloating, hypothyroidism, Von Willebrand’s disease, and degenerative myelopathy.

But they inherit these issues less often compared to the German Shepherd. Make sure to get a dog from a reputable breeder to avoid health risks.

On average, a healthy German shepherd lives between 10 to 13 years. They achieve that lifespan when they have regular vet visits, receive proper vaccinations, have a good diet, and provide care and exercise.

King Shepherds have a slightly longer lifespan, between 12 and 15 years. They are generally healthier but face the same problems. The difference is their health problems appear less often in King Shepherds than in German Shepherds.

The big problem is they are bigger and more robust dogs. And generally speaking, larger dogs have a shorter lifespan.

King Shepherd has long and thick coat, meaning grooming is a necessity. You have to brush and comb their double-layered coat two to three times per week. Sometimes, even every day. Expect seasonal shedding.

German Shepherds have short and dense coat that demands minimal grooming. Weekly brushing will do just fine to keep tangles, debris, and burrs away.

Let’s finish off King Shepherd versus German Shepherd debate by deciding which one to get. Honestly, they share many of the same traits, it is hard to make a choice.

If you want a dog that is slightly more protective and less friendly with strangers, go with the German Shepherd. King Shepherds tend to be less wary of strangers. King Shepherd is also a better choice if you are worried about health issues.

But you also have to factor in size. While neither is good for apartment living, the German Shepherd is a medium to large dog. King Shepherd is a giant dog.