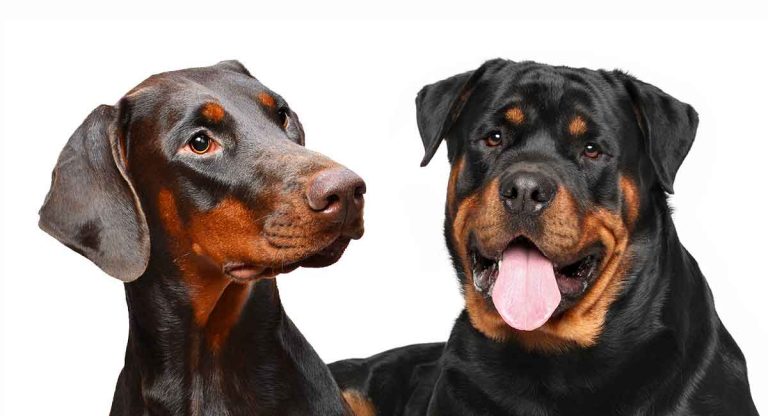 These are among the most popular, and at the same time, best guard dogs. But which is the better option?

When making the Rottweiler vs Doberman comparison, you will understand that these two are quite comparable and similar. Both of these breeds are intelligent, strong, and quite protective of their owner and surroundings.

But there are also many differences. For starters, the Rottweiler is a stronger and larger breed, while the Doberman is a leaner, and more athletically built dog.

Let’s dive into the comparison, and see which one is better for you.

First, let’s start with breed history. This will help us understand the temperament of these large breed dogs.

Starting with the Rottweiler breed, considered one of the oldest surviving canines. The origins date back to the Roman Empire when they were kept as herding dogs and driving dogs. Rotties marched over the Alps with the Roman legions, protecting the humans and driving the cattle.

They came to the region of Rottweil, a town in Germany, where they were mixed with native dogs. During World War I, there was a huge demand for police dog breeds. This revived the Rottweiler dog breed. During WWI and WWII, this working dog filed several rules.

The American Kennel Club officially recognized the dog breed in 1931.

Now, speaking about the Doberman dog breed. It was first bred by Karl Friedrich Louis Dobermann in Apolda, Germany, in the 1880s.

He was a tax collector who had access to many different canines. He wanted a new type that would have impressive stamina, strength, and intelligence. Later on, Otto Goeller created the National Doberman Pinscher Club and perfected the breed.

Initially, the dog was called Dobermann Pinscher in the honor of Louis Dobermann. But later on, the word pinscher was dropped because it was no longer appropriate. 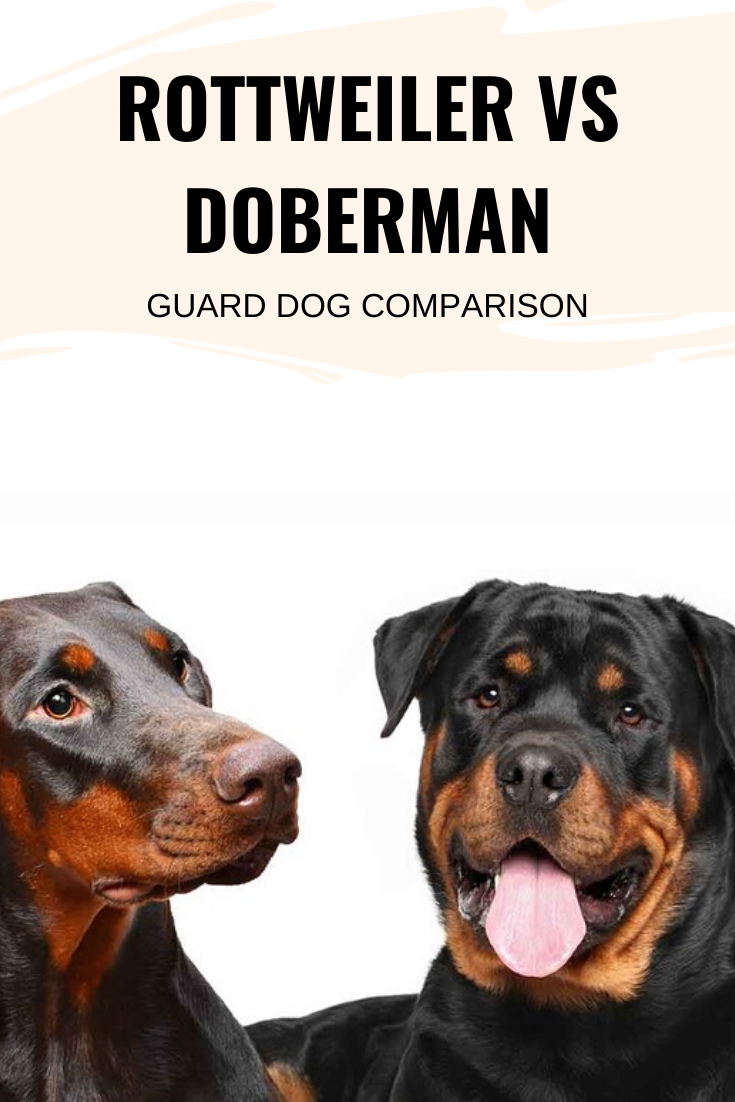 When you are looking for a dog, there is no one-size-fits-all approach. Between the Doberman and the Rottweiler, there are many similarities. For starters, both breeds carry the same stereotype, which is that they are aggressive and dangerous dogs.

Just mentioning their name might evoke fear in some people. Some countries have even banned them. But is it safe to own one of these? Before we get into a deeper comparison of Rottweiler vs Doberman, let’s talk about their general differences.

Yes, it is safe to own any of these breeds. And at the end of the day, it comes down to which one feels more compatible with you.

Just looking at them side by side, you notice the first difference. And it comes down to their history and tradition. These dogs were developed for different purposes, but nowadays, they serve a similar purpose.

While both are classified as working breeds, the Doberman was initially developed to be a police and guard dog. Because of that, he has a sleek and lean body, he can run faster and weighs between 75 and 100 pounds.

On the other hand, the Rottweiler comes with a solid, muscular, and more robust body. That is because he was developed to drive cattle across the market. He is among the first cattle dog breeds. His job was also to protect the cattle from strangers, robbers, and wild animals.

Nowadays, both of these breeds serve a guard dog purpose.

We mentioned previously that these dogs are perceived as aggressive breeds. But that is far from the truth. Their bad reputation is because of the history and how were they raised. And most importantly, how we, as humans, used them.

Both breeds have been popular choices for dog fights, mostly because of their strong and muscular body. That applies even more to the Rottweiler.

The truth is, however, quite different. For example, the Rottweiler is a calm, gentle, and intelligent dog breed.

He is devoted and affectionate toward his family. The Rottie loves to be around his people and those he loves. However, he is not as friendly when meeting strangers.

The Doberman is similar in that regard. He will be alert, fearless, and fiercely protective. If the Doberman feels threatened in any way, he will be aggressive and act in an intimidating way.

With positive reinforcement training and plenty of socialization, these dog breeds develop into a confident and non-aggressive dog.

Being that these two are large dog breeds, early socialization and proper socialization are a must. Rotties and Dobies are intelligent breeds and respond well to training. Yet, you need to set firm boundaries, because they can outsmart you.

Of the two, Dobermans are more eager to please, while Rotties have a stubborn gene in them. It might be more challenging to train them.

Obedience training should focus on putting these dogs to work. As working dog breeds, they want to work and use their intelligence. For proper training, make sure to include mental stimulation, and make your puppy work.

Remember, they filled the role of guardians. So, make sure to add early socialization and proper training to solve their protective nature.

When you are working with working dogs, you need to put a lot of time and effort to exercise them properly.

At a minimum, these two should get 60 minutes per day of exercise. Of the two, Doberman Pinscher is the more energetic dog. He is also more intelligent, meaning he needs more mental stimulation.

If they do not receive enough exercise and mental stimulation, they tend to show destructive behavior.

How do they do as guard dogs?

If you want a guard dog, you can choose any of these breeds. But the Doberman is the one originally bred to be a guard dog. He was developed by a German tax collector in the 1890s. The idea was to get a strong, loyal, and ferocious dog. And that is exactly what you get.

The Rottweiler was also developed to guard his cattle. And if you chose any of these breeds as a guard dog, they will excel in their role. It comes down to other properties and personality traits.

When you talk about an excellent guard dog, you need to pay attention to bite force. After all, you want a dog that will do a proper job.

If that is what you are looking for, Rottweiler puppies have stronger bite force. A Rottie has a bite force of up to 328 PSI. The rottweiler breed is one of the strongest canines in the world.

Dobermans have a bite force of 305 PSI. Their small, yet sharp jaws allow them to bite someone in rapid succession.

This is one area where you really start to see a significant difference between Rottweiler vs Doberman comparison. While neither of these breeds has a long life expectancy, the Doberman is the healthier breed. And that is because of his more agile body.

The Doberman generally exercises and runs more, has a lean body, and fewer health issues. For example, the Rottweiler often suffers from cancer, which can be a life-threatening condition.

Make sure you get your dog from a reputable breeder that will provide the health certificate of the parents, ensuring they are tested and cleared of hereditary health concerns.

Some of the health issues linked with Dobermans are:

Because of their stronger body, the Rottweilers are more prone to hip and elbow dysplasia. These conditions are hereditary malformations that occur during periods of rapid growth. They can cause arthritis, deformed joints, and generally lower the quality of life.

We mentioned Rotties are prone to cancer as well. In fact, they are one of the few breeds that have breed-predispositions for cancer, along with the Golden Retriever.

Hypothyroidism is another common issue among Rottweilers when the thyroid gland doesn’t produce enough hormones. This can result in symptoms like tiredness, weakness, and loss of hair.

Which is the smarter dog?

When it comes to intelligence, you cannot go wrong with either breed. Generally speaking, the Doberman is the more intelligent breed.

They are ridiculously smart and trainable. In some cases, the Doberman might even outsmart his owner. Because of his natural instinct to be a watch dog, the Doberman an accurately evaluate potential threats. And they are quite alert and lighting quick.

At one moment, they can play with children and scare the person approaching or walking by your home the next second.

Rottweilers are also trainable and intelligent. And they are more obedient. Unlike Dobermans, they will not try to outsmart their owner. In fact, they love to please their owner.

Are they good with children and animals?

When it comes to how sociable they are, it depends on a lot of factors. That includes socialization, training, and more. But generally speaking, the Doberman is the more dominant personality dog. They are the alpha and omega of the canine world.

On the other hand, the Rottweiler has the potential to be a gentle giant, but also a ruthless protector. Speaking of children, these breeds are quite good with children. But because they are large, kids can often abuse them, for example, trying to ride them.

Do not let them do that. These breeds to not react kindly when being attacked. If you train them properly and socialize them with children, they will be great family dogs.

And more importantly, they will not let anyone harm you or your family.

Which is the best for you?

So, which of these strong dogs is your ideal family pet? Well, if you are looking for a large and protective breed, you cannot go wrong with either one.

It really comes down to preference. Dobermans are more energetic and intelligent, while Rotties are better with children and other animals.