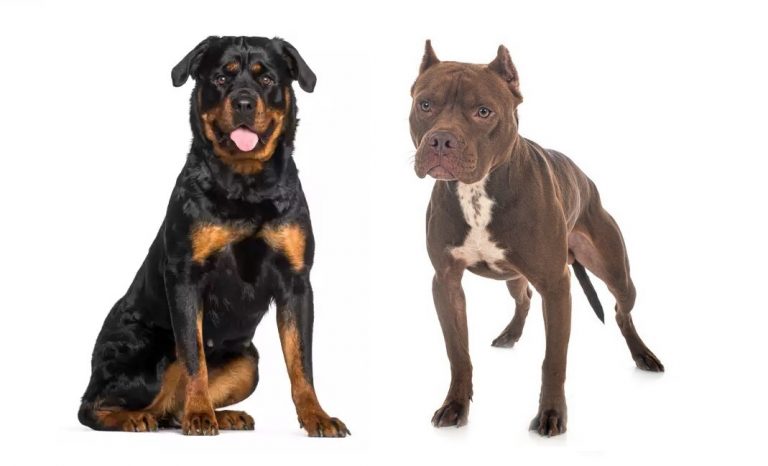 Sadly, some dog breeds receive a bad reputation despite their affectionate personality. Two of those breeds with undeserved bad reputations are Rottweiler and American Pit Bull Terrier. Neither of these two deserves the criticism they get. Today, we will talk about Rottweiler versus Pitbull, trying to debunk some of the myths surrounding these puppies.

When you mention either of them, people are afraid. Yes, they might look intimidating, especially the Rottie. But they are sweet-natured, loving, affectionate, and loyal canines that are often misunderstood.

A large part of that is because of their history. For example, the American Pitbull Terrier was originally bred to bait bulls, but since then has evolved into a family pet.

With no further ado, let’s get into the debate.

We often say that you have to look at the history of a certain dog breed to understand its temperament and personality. In this case, Pitbulls suffer because of their history. But let’s get something straight. They are not the fighting dogs they were once used for.

First, let’s start with the history of the Rottweiler dog breed. This puppy dates back to the Roman Empire. Considered one of the oldest recorded breeds, the Rottweiler puppy descends from ancient Mastiff-type dogs.

This canine was originally bred to herd cattle alongside armies and ensure its protection from wild animals and robbers. The name comes from the town in Germany, where the breed descends from. Traveling butchers there were inspired by its herding and guarding abilities, so they used the dog to protect their money by tying them around the purse around the dog’s neck.

In Germany, the dog is known as Rottweiler Metzgerhund, translating to Rottweil Butcher Dog in English.

Over time, this puppy found other forms of employment, including being a farm dog because of his power in moving large objects. But he was also used as a police dog, protection dog, and guard dog. Nowadays, however, this canine has evolved into a great family pet. And despite being in the top 10 of popularity by The American Kennel Club, people still consider him a dangerous dog.

But we will talk about the American Pitbull Terrier today. This dog is not recognized by The American Kennel Club. Many breeds are often wrongly labeled as Pitbulls, including Cane Corso and Dogo Argentino. This is another reason for the bad reputation.

With that in mind, in the beginning, Pitbulls were used as fighting dogs. They were used in dog fighting arenas and for baiting bulls in England.

When the sport was banned in Great Britain, people moved to the US and brought their Pitbull breed with them. They then continued the dog fighting sport in the US.

It took many years for this bloody sport to be banned. And since then, the Pit Bull Terrier is trying to change its reputation.

It is hard to understand how popular this dog is because The American Kennel Club doesn’t recognize it.

Now let’s talk about breed comparison. And we have to start with appearance. It is instantly obvious these two are quite different dog breeds.

When you look at them side-by-side, the Rottweiler is the larger dog. Growing between 24 and 27 inches, the Rottie is a large dog breed. Pitbulls stand between 18 and 21 inches. Then, we take a look at weight.

Rottweilers can weigh up to 135 pounds, nearly double the average weight of a Pitbull breed, between 35 and 60 pounds.

Another difference in their appearance is the coat. Pit Bulls have a shorter coat than most canines. Lacking a stratified undercoat, Pit Bulls have a single coat. On the other hand, Rottweilers have double-coat and shed heavily to lose their undercoat.

They also differ in their coat colors and markings. Rotties have a uniform color pattern, and breed standard accepted by The American Kennel Club. They are black with rust to mahogany markings that appear across the eyes, nose, chest, legs, and tail.

Pitbulls, on the other hand, can come in many different colors. Some of the colors include black, white, brindle, fawn, grey, blue, red, brown, and many more. 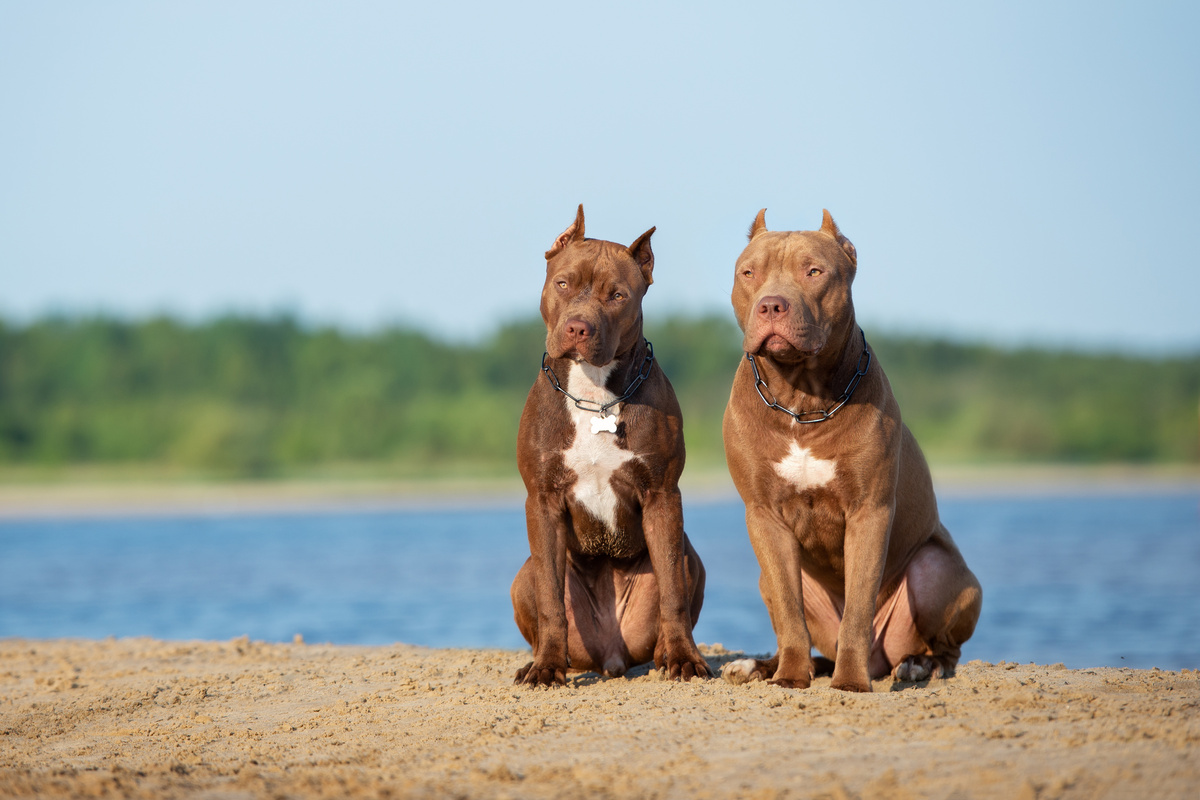 As we said before, these two have a similarly bad reputation. Their reputation as aggressive dog breeds is underserved. Some would say Rotties are status dogs, a canine people get to show their wealthy status.

Speaking of personality, Pitbulls are naturally friendly and active dogs. They are nowhere near the aggressive dog status they have. Contrary to popular belief, they are patient and love to play with children. You will hardly find a friendlier family dog.

They can also live in a household with other dogs and pets. Despite their reputation, Pitbulls do not attack other animals or people. They are the worst guard dog. They crave love, affection, and attention.

Rottweilers, on the other hand, look confident and fearless. They were bred to be guardians, and have attained their guarding instinct. Rotties are more aloof with strangers, unlike Pitbulls. But they are loyal and affectionate with their family.

One thing to note, Rotties are territorial because of their guarding instinct. Because he was also a herding dog, he might show the instinct to herd children in the family.

But when domesticated and trained properly, Rottweilers will be playful and friendly.

These dogs are intelligent and react similarly when trained. They both want to be stimulated, both mentally and physically.

Training intelligent dogs like Rottweilers and Pitbulls is relatively easy. They want to be trained and seek to please you.

Besides training, it is important to socialize these dogs at an early age. Pay attention to the guarding tendency of your Rottweiler.

When we talk about Rottweiler versus Pitbull training, positive reinforcement is the way to go. But different things motivate your dog. Pitbulls are mostly motivated and driven by affection. So make sure to praise your dog a lot after good behavior. Rotties might be motivated by toys and dog food.

These two are among the best-behaved dogs when properly socialized and trained. 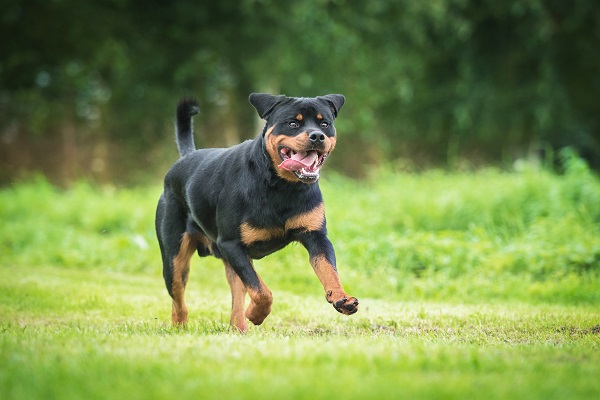 Now let’s get to the exercise needs of the Rottweiler versus Pitbull debate. They are both medium-energy dogs at the very least. That means at least 60 minutes of exercise per day. But that should also include mental stimulation. Otherwise, your puppy will quickly become bored.

The Pit Bull Terrier needs a bit more exercise because he is a high-energy dog. Include lots of games like fetch, and Frisbee, or try some dog sports and dog agility exercises.

Make sure to supervise playtime around children. Remember, despite their gentle temperament, they are strong and powerful dogs.

If these two dogs are not properly exercised and stimulated, they can become destructive. These dogs need an active dog owner.

Before we get to the bite force of these dogs, let’s talk about the lockjaw situation. It is a big myth that Pitbulls have a locking jaw.

This dog does have a powerful bite force, but the Rottie has even stronger. With that in mind, the Rottweiler has a bite force of 328 PSI. It is a powerful bite, but it is not something that should classify the canine as a dangerous dog.

Pitbulls, on the other hand, have a bite force of 235 PSI. 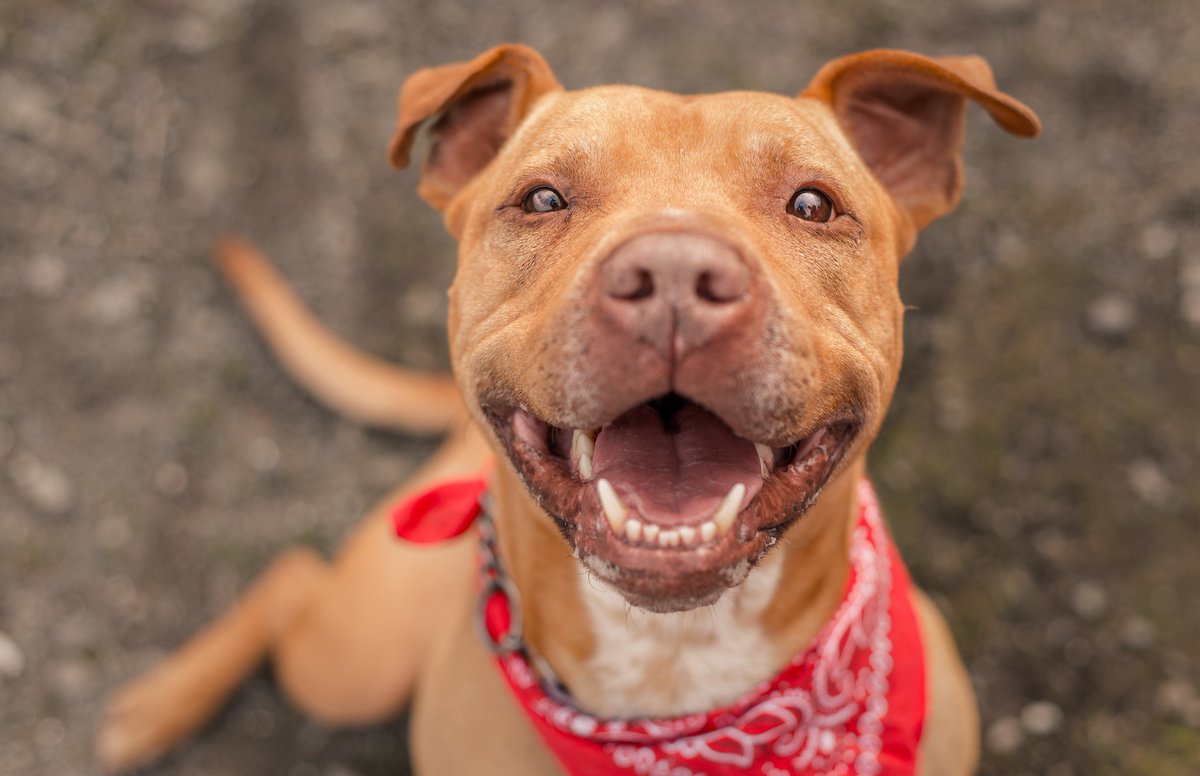 Both these breeds are considered rather healthy breeds. Yet, they do suffer from some health issues. Rotties usually suffer from inherited health conditions, which is why you should look for a reputable breeder. Common health problems include hip dysplasia, elbow dysplasia, aortic stenosis, OCD, entropion, and cancer.

Pit Bulls, on the other hand, can suffer from bone diseases like degenerative myelopathy and kneecap dislocation. Because they have one of the shortest coats in the canine world, they are also prone to skin issues and skin allergies.

Of these two, the Pit Bull is the healthier breed. They have a longer life expectancy of 13 to 15 years. Remember, Rottweiler is a large dog breed, meaning they generally live shorter. Their life expectancy is between 8 and 10 years.

Which Is The Best For You?

So, which is the right dog for you? If you want either of these two canines, we suggest you at least have some experience with dogs. Because of their reputation, these dogs are not for an inexperienced dog owners. They need someone with experience that can handle their temperament and train them to be well-mannered pets.

Still, after explaining every aspect of the Rottweiler versus Pitbull debate, we hope you can make an informed decision.