Scottish Deerhound vs Irish Wolfhound – Your Choice For A Large Dog 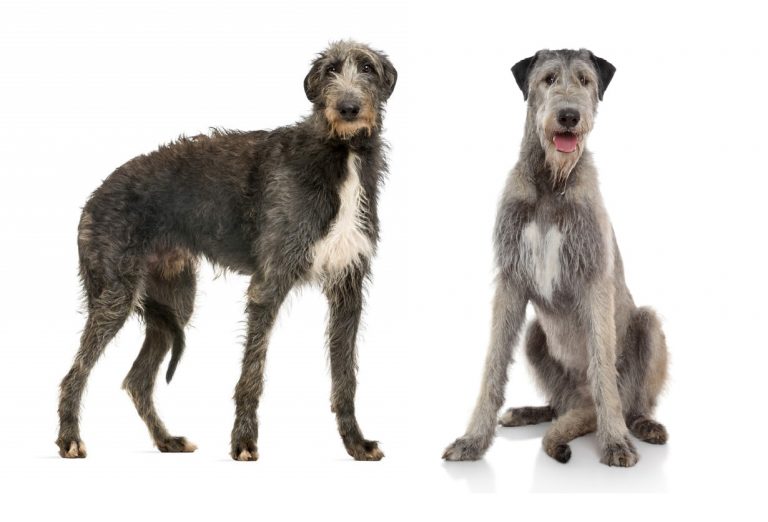 When you talk about large dog breeds, you cannot start a discussion without two of the largest. Those are Scottish Deerhound and Irish Wolfhound. Which is the better family pet? They are both members of the Hound group, making them quite similar canines. Yet, today, we will try to break down all the differences between Scottish Deerhound and Irish Wolfhound.

If you have settled on adopting a large breed, it is time to look deeper into the debate between these two hound dog breeds.

When it comes to any canine comparison or debate, you have to start with history. Why? Because it will help you understand your dog’s personality. These two have separate histories from different countries, but their journey is full of myths and legends. Both dogs have been part of legends, old tales, and stories dating back thousands of years.

Let’s start with the Scottish Deerhound, otherwise known as the Royal Dog of Scotland. This old breed has been in Scotland even before the Scottish arrived in the 9th century. Their name comes from their purpose. Back in the day, this dog could hunt 400-pound wild Red Deer easily.

To this day, this canine remains a rare breed. You can find it in some patriotic Scottish families and sighthound lovers.

The Irish Wolfhound is believed to be the oldest breed. Per some sources, its history dates back to 391 AD, when the Roman consul received a gift of seven Irish Wolfhounds.

Back in the day, the canine hunt the now-extinct Irish Elk, measuring six feet tall at the shoulders. In the 15th century, with wolves roaming the Irish countryside, the hunting focus shifted to them instead of the Elk. The Irish Wolfhound could take down a wolf with ease, hence, their name.

The Irish Wolfhound has a unique story. Because they were so good at their job, they almost brought large predators into extinction. With that, their service was no longer required. And that caused a downfall in numbers. In the 19th century, fanciers took control of the situation and saved the breed. It remains a rare breed to this day. 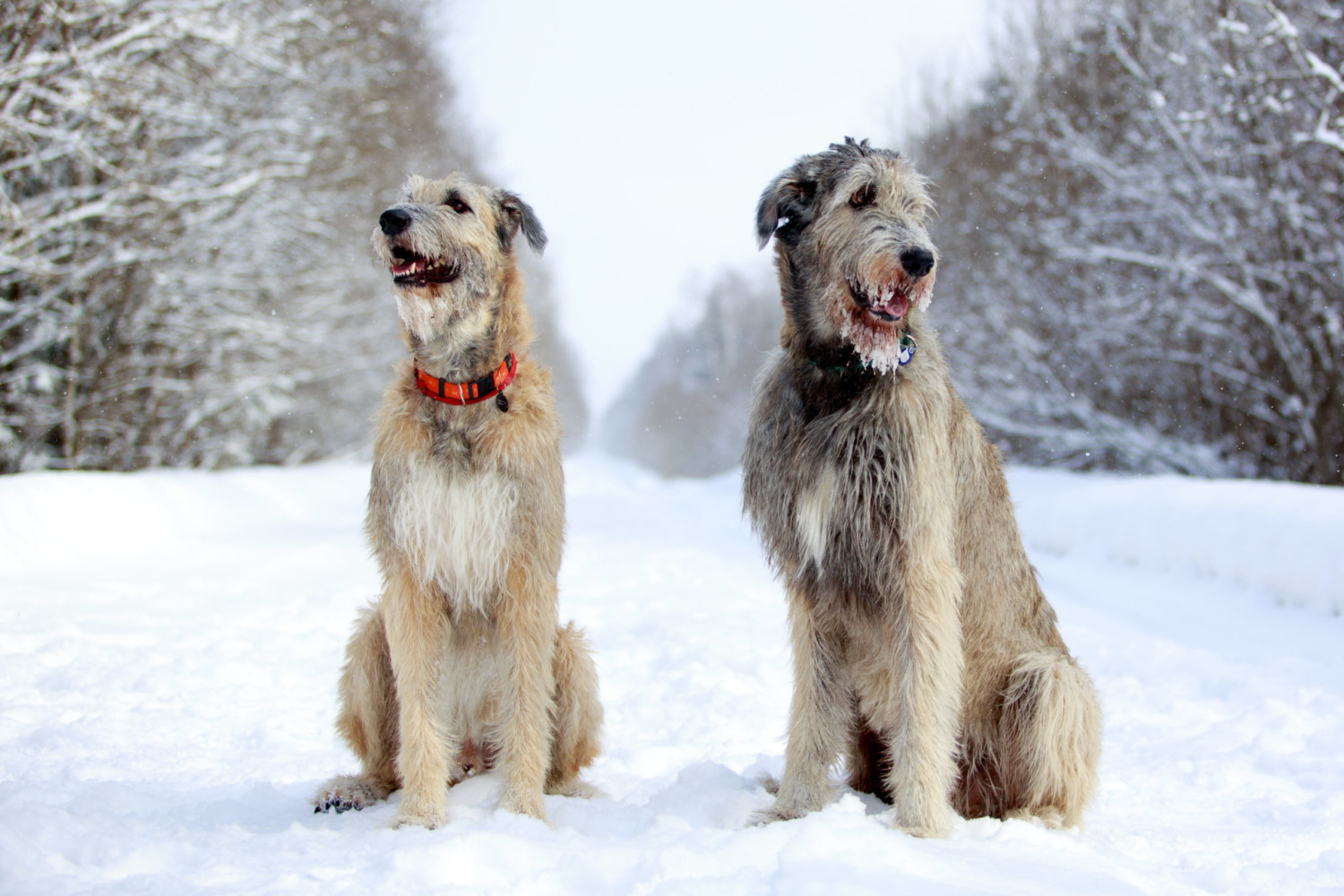 When we talk about Scottish Deerhound versus Irish Wolfhound debate, you can notice the initial differences in their appearance. The latter grows larger in height and weight.

Both look similar, but there are some differences in size. The Irish Wolfhound is recognized as the tallest dog breed by The American Kennel Club.

Depending on gender, they grow between 30 and 36 inches tall. On the other hand, the Deerhound puppy grows between 30 and 32 inches. The Scottish Deerhound dog is still tall, but not compared to the Wolfhound.

Then, you look at weight, and the Irish Wolfhound weighs between 130 and 160 pounds, compared to the Deerhound which grows between 75 and 110 pounds.

When these two are side-by-side, you can’t really tell the difference. They have similar muzzles and gentle faces. The differences are rather subtle, but for the trained eye, very noticeable. We have to talk about colors here. The Irish Wolfhound has 13 accepted colors, including black, blue, brindle, gray, cream, and more. White, black, and gray markings are allowed.

Their tail is the first difference. Both breeds have wiry tails, but the Wolfhound has a long and slightly curved tail. On the other hand, Deerhound dogs have long and tapering tails.

Last, but not least, their ears. The breed standard for Irish Wolfhounds describes their ears as small and Grey-hound-like. On the other hand, Deerhounds have more lengthy ears that are set on high, folded back, but raised above the head in excitement without losing the fold. 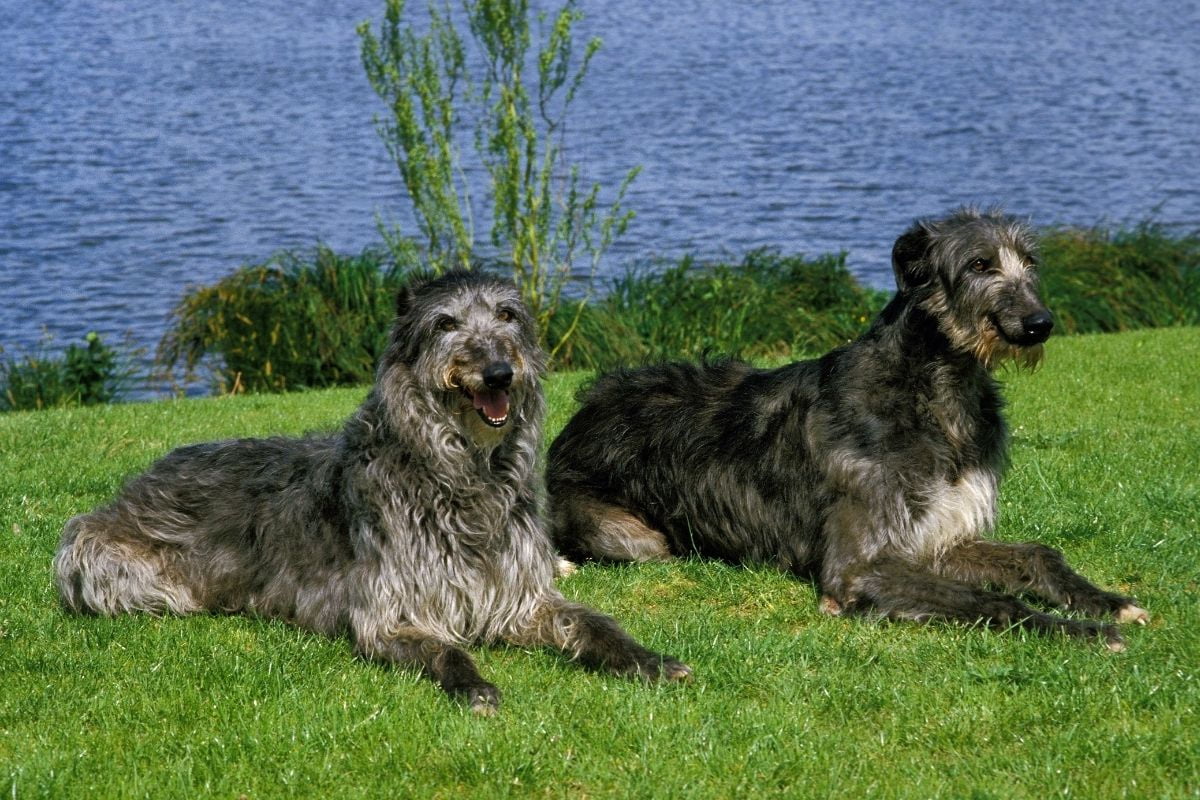 Being that these two are hound breeds, namely sighthounds, they have similar personality traits. Dog owners describe them as true gentlemen. They are courageous but not aggressive, loyal but not clingy, and alert but dignified.

With their family, both breeds are close and affectionate. They are not aloof with strangers. Instead, they are indifferent. In other words, they ignore anyone that is not their family. This makes them terrible for the role of a guard dog. To paint you a picture, these dogs will allow strangers to move around your home without producing a single bark.

When you look at their large size, you might think they are lazy. But instead, they are fast and agile. Remember, they were used for hunting.

Speaking of their hunting background, nature, and instinct, they should live in a doggy household, not with cats or smaller animals. They do have a prey drive.

As for children, both dogs are comfortable with children. Yet, because of their sheer massive size, make sure to supervise play. These dogs crave human interaction and will not do well on their own. Leaving them alone for long periods might cause separation anxiety. We said these two are sight hounds with a history of hunting. Despite their size, they are quite active, agile, and energetic. You will need to provide at least 60 minutes of exercise per day. Irish Wolfhounds need a bit less, up to 40 minutes of exercise.

Your Irish Wolfhound is prone to an afternoon snooze or two. Deerhounds snooze less. Of the two, the Deerhound needs more mental stimulation to prevent boredom. You definitely do not want a bored hound in your home. Combine their size and boredom, and you have a recipe for a disaster in the home.

First, let’s talk about the Scottish Deerhound. This canine is a calm and docile breed, but because of its great size, early training and socialization are a must. Because of their loyal nature and eagerness to please, Deerhounds are fairly easy to train. Yet, you will have to find a way to handle their stubborn and independent nature.

Be patient, and will get there. We have to note, the Deerhound is fairly slow to mature. Training will take some time.

With the Wolfhound, you might have it easier time. But the Wolfhound is also the less intelligent of the two, meaning he will need more repetitions to solve the task.

One of the differences between the two is that the Wolfhound has a double coat and the Deerhound does not. Yet, grooming is easy with both of them.

Weekly brushing will keep your pet’s coat from accumulating debris and dead hairs. Bathe your dog only when warranted.

Speaking of shedding, Deerhounds shed seasonally, while Wolfhounds shed throughout the year, but not excessively. 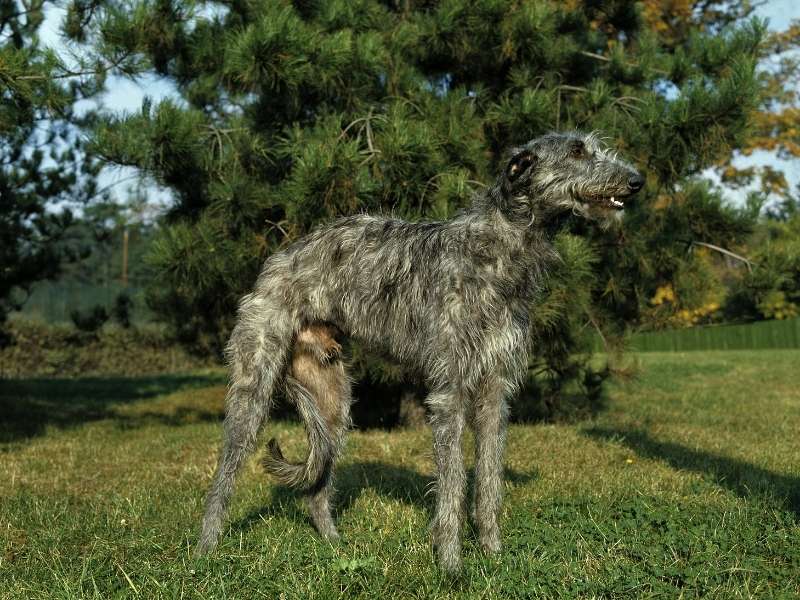 When you own a giant breed, you have to be ready for some health issues. Great size brings a greater risk for health problems. Both are susceptible to heart problems, bloat, hip dysplasia, bone cancer, and elbow dysplasia.

Overbite is another problem that has been noticed in these two. But the biggest challenge is their drug sensitivity and issues with anesthesia.

Let’s wrap up this Scottish Deerhound versus Irish Wolfhound debate. Choosing between the two is not an easy task. But it comes down to preferences.

Deerhounds are the more intelligent breed, but they also need more stimulation and exercise. Wolfhounds are gentler, but also larger.

Both of them can adapt to apartment living, but as long as you have a large one where they can spread their legs.

Of the two, Wolfhounds are better family pets, but they do have a stronger prey drive.