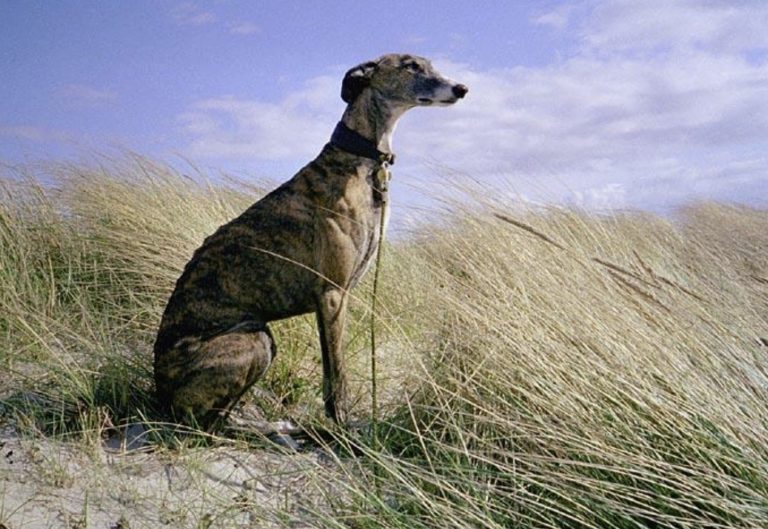 What are sighthound breeds? Sight hounds are a group of super speedy dogs that, unlike most hunting dogs, use their sight as the main sense. Most dogs use their sense of smell. After all, dogs have a 10,000 times better sense of scent.

Yet, these sighthound breeds like Greyhound, whippet, Borzoi, Saluki, and more, use their sight.

Why get a sighthound breed?

Well, for starters, here are some personality traits. They are amazing, kind, sensitive, affectionate, funny, graceful, loving, loyal, and more. But the main reason people choose a sighthound breed is that they are clean lazy dogs that do not bark and happily live in both country and town.

Sighthounds do not need tons of exercise, an hour per day is more than enough. Some off lead time is good, but they will also be happy with walking or running with you. These dogs shed little hair and are not prone to health illnesses.

Fun facts and things you need to know

Before getting any sighthound dog breed, there are some fun facts and things you need to know. Here we go. 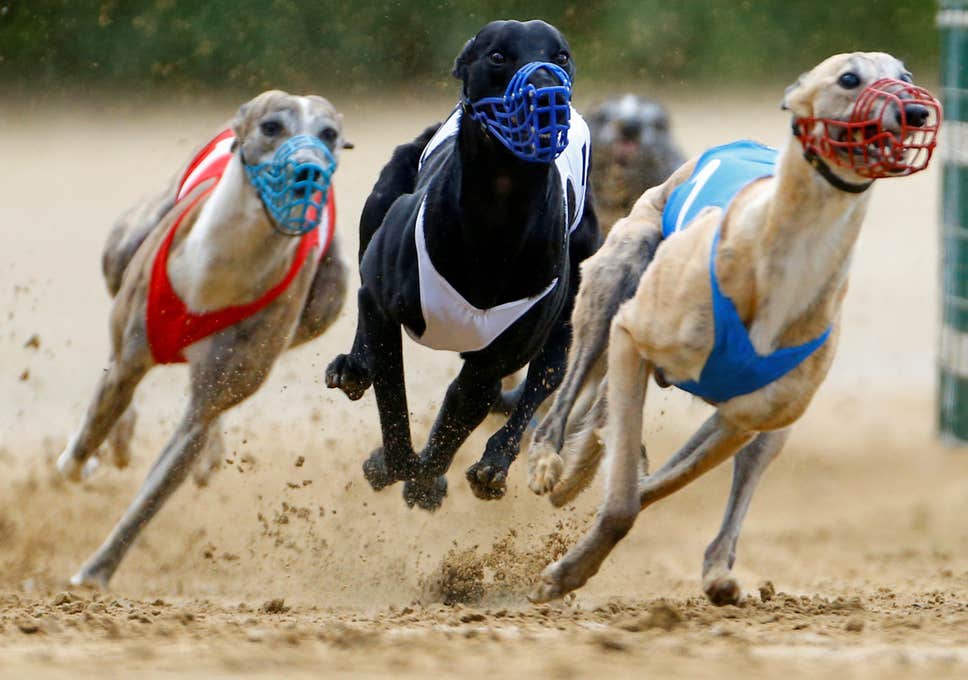 Also known as the English Greyhound, this sighthound breed has been bred for coursing game and greyhound racing.

The tall, muscular, and S-shaped dog has a long tail and tough feed. They are a gentle and intelligent breed that has been mostly popular as racing dogs. Because they can exceed a speed of 40mph, and reach a full speed of 43mph within 98 feet, greyhounds have been used for racing for ages.

But they are also a good domestic dogs. 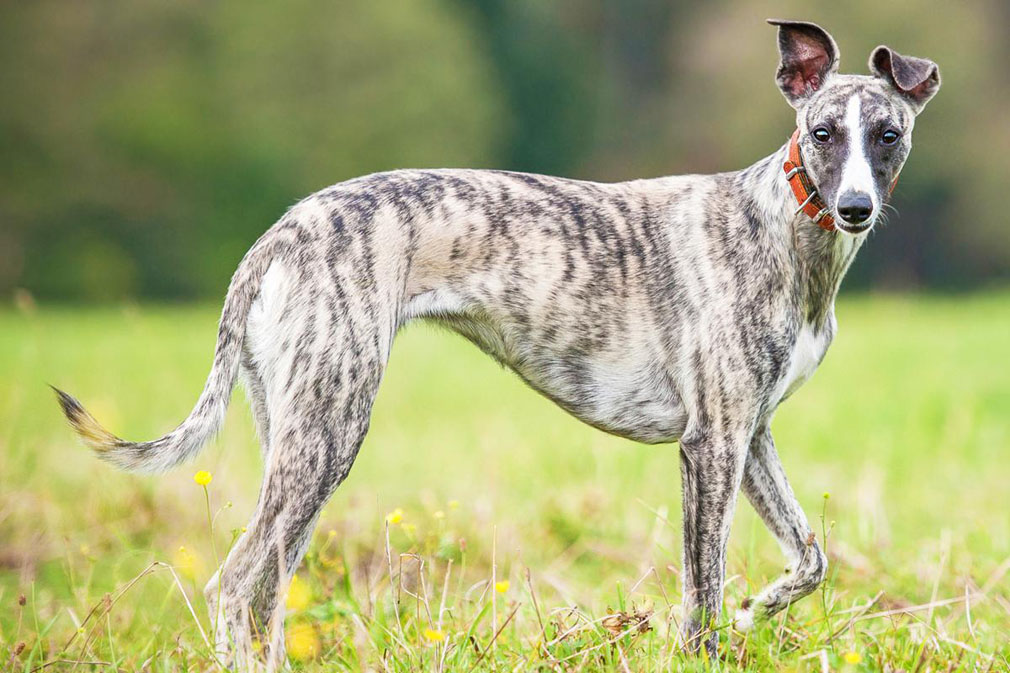 Whippet is a Poor Man’s Racehorse. That might be their description, but they are lightning quick. The Whippet is a dignified and gentle soul. Yet, give them something to chase, and it is all business from there on.

Their appearance is quite similar to the English Greyhound but smaller. They also have the classic Inverted S line of the sighthound.

Now you might think of the whippet as a racing dog. But this puppy loves to stretch out and relax for long hours. They will love being a companion dog.

Because they rarely bark and can adapt in an apartment provided they get exercise, whippets are great for apartment dwellers. 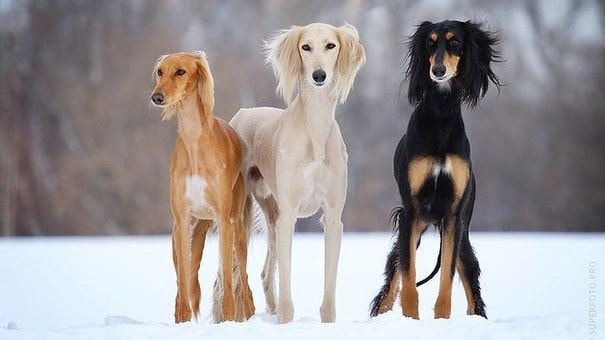 Among the most popular sighthound breeds, we have the Saluki, also known as the Persian Greyhound. This standard breed was used by nomadic tribes to run down game animals.

Originally bred in the Fertile Crescent, the modern Saluki is likely related to the Afghan hound. They have been purebred in the Middle East, mainly by royalty, since at least the 19th century.

The Greyhound is the fastest dog at distances of up to 2,600 feet, but the Saluki is faster over a longer distance. They have remarkable stamina thanks to their heavily padded feet. In 1996, a Saluki broke the Guinness Book of Records by reaching a speed of 42.8mph. 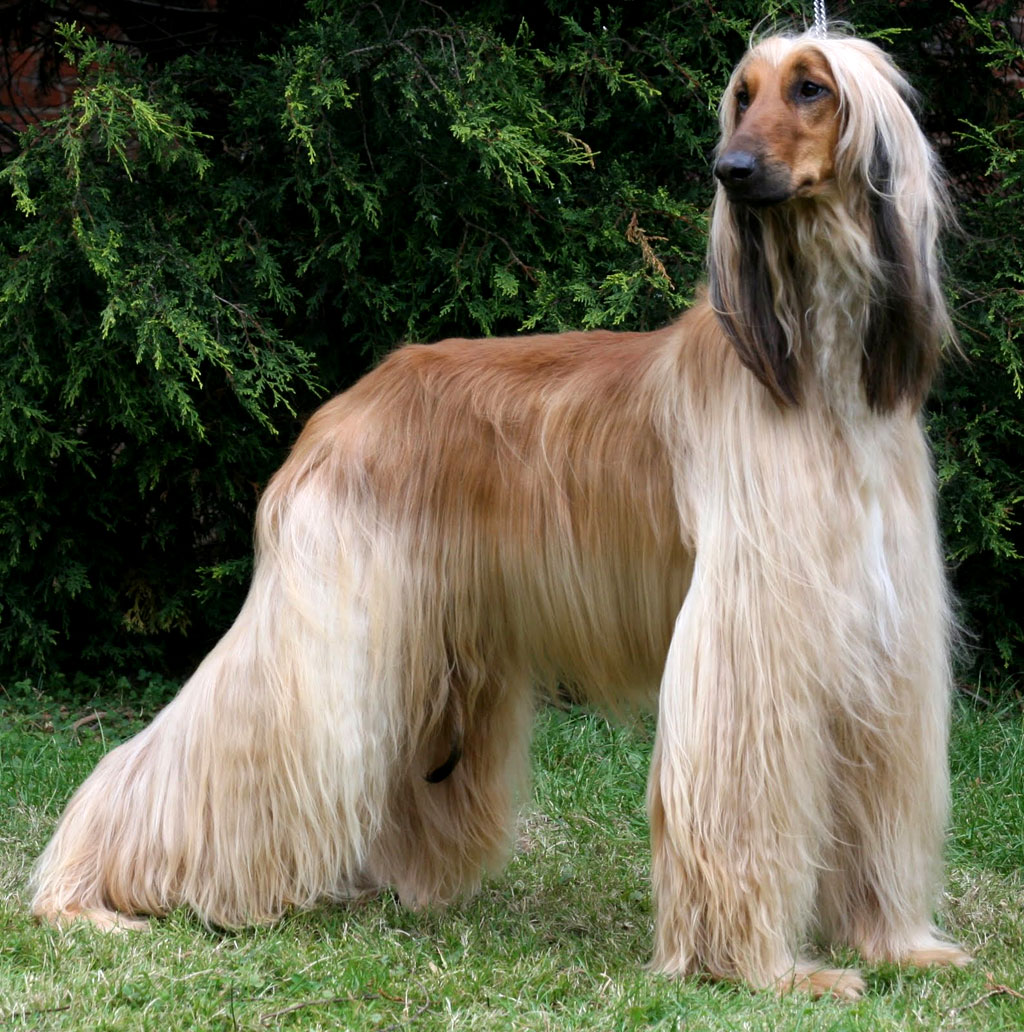 The Afghan Hound is among the most eye-catching breeds. He is an aloof and dignified aristocrat with a regal appearance.

This dog breed has been famous since ancient times for its elegant beauty. Their thick, silky, and flowing coat brings glory to the puppy.

But beneath its glamorous exterior, the Afghan Hound is a powerful and agile hound standing at 27 inches at the shoulders.

Simply put, it is a special breed for special people. 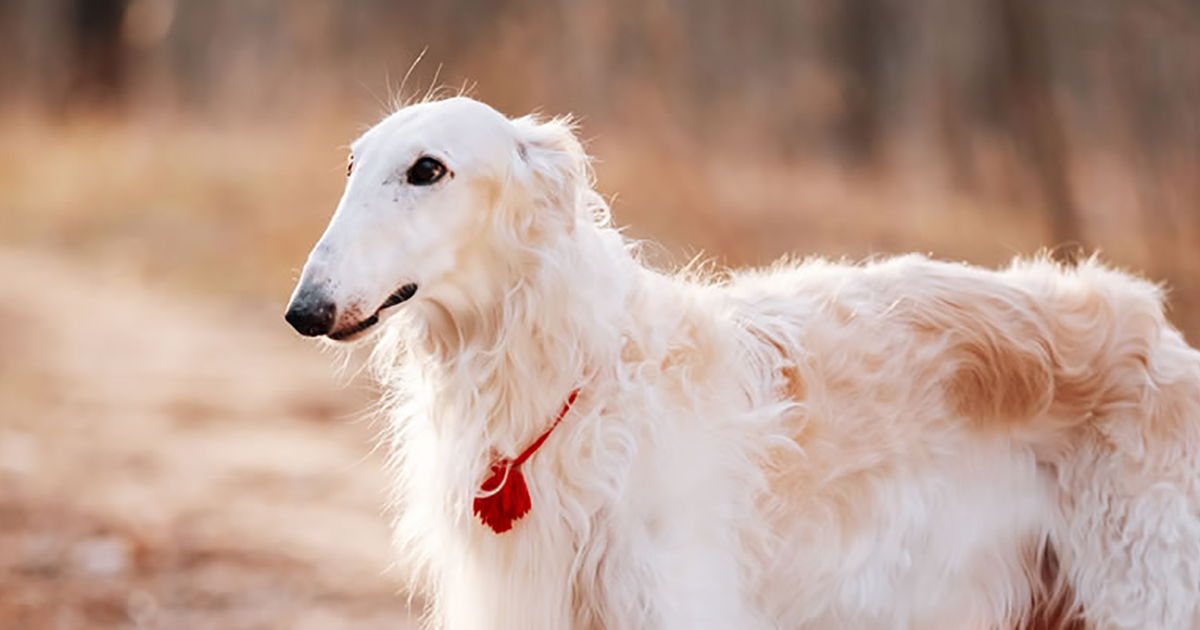 Also known as the Russian Hunting Sighthound, the Borzoi is a Russian breed of hunting dog. Formerly used for wolf hunting, the Borzoi originated in the 16th century by crossing Persian greyhounds and European sighthounds.

Until 1936, the sighthound breed was actually known as the Russian Wolfhound. Popular with the Tsars before the 1917 revolution, for many centuries, you could not purchase a Borzoi. Instead, they were only given as gifts from the Tsar.

For example, the Grand Duke Nicholas Nicolaievich of Russia bred countless of them at his private estate at Perchino. 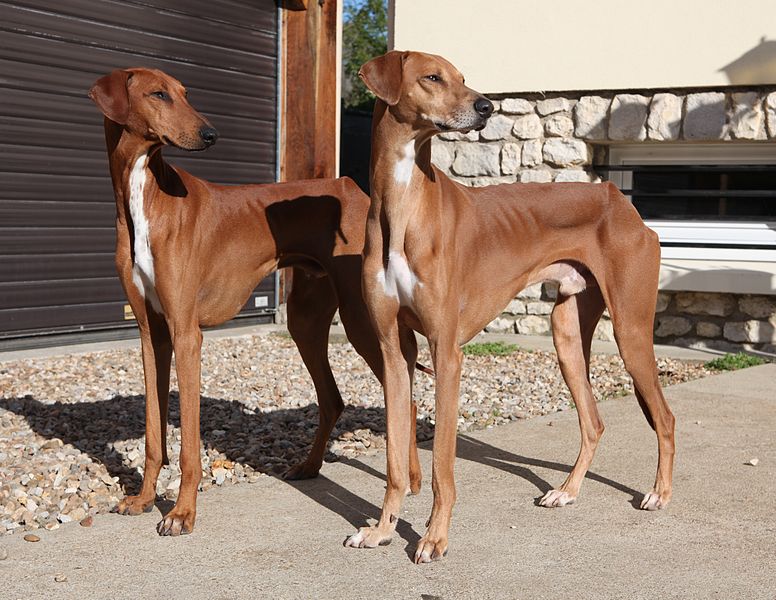 This breed comes from West Africa and has ancient origins. It was raised in the Azawagh Valley, from which it got its name.

They are related to other sighthounds, like the Saluki, for example. They are sound coursing hound. Unlike most sighthound dog breeds, they are prone to some health issues like idiopathic epilepsy, Wobbler disease, and cervical vertebral instability. 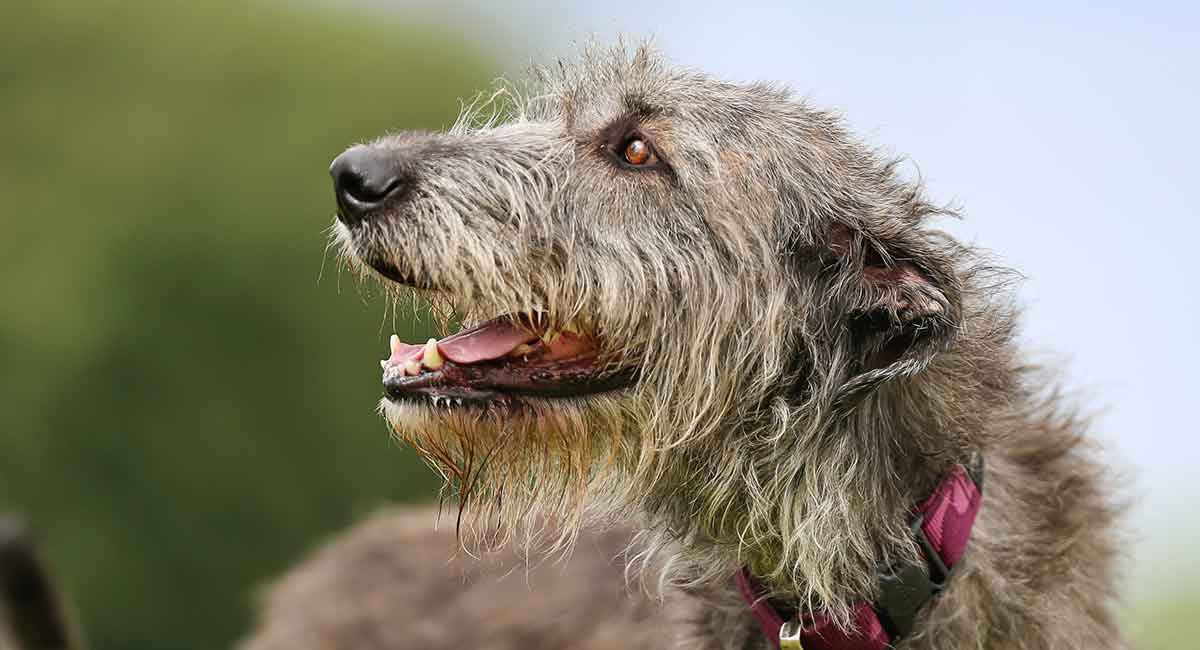 We have to talk about the calm and dignified Irish Wolfhound. He is the tallest of all American Kennel Club breeds. He was once a fearless big game hunter capable of dispatching a wolf in single combat.

Today, the Irish Wolfhound is a loyal companion. His immense and muscular body still allow the hound to reach a great speed at the gallop.

They are great family dogs. Because they are very patient with kids, the Irish Wolfhound can work in any family. Yet, we have to stress supervision when they play with kids, mainly because of their large size. 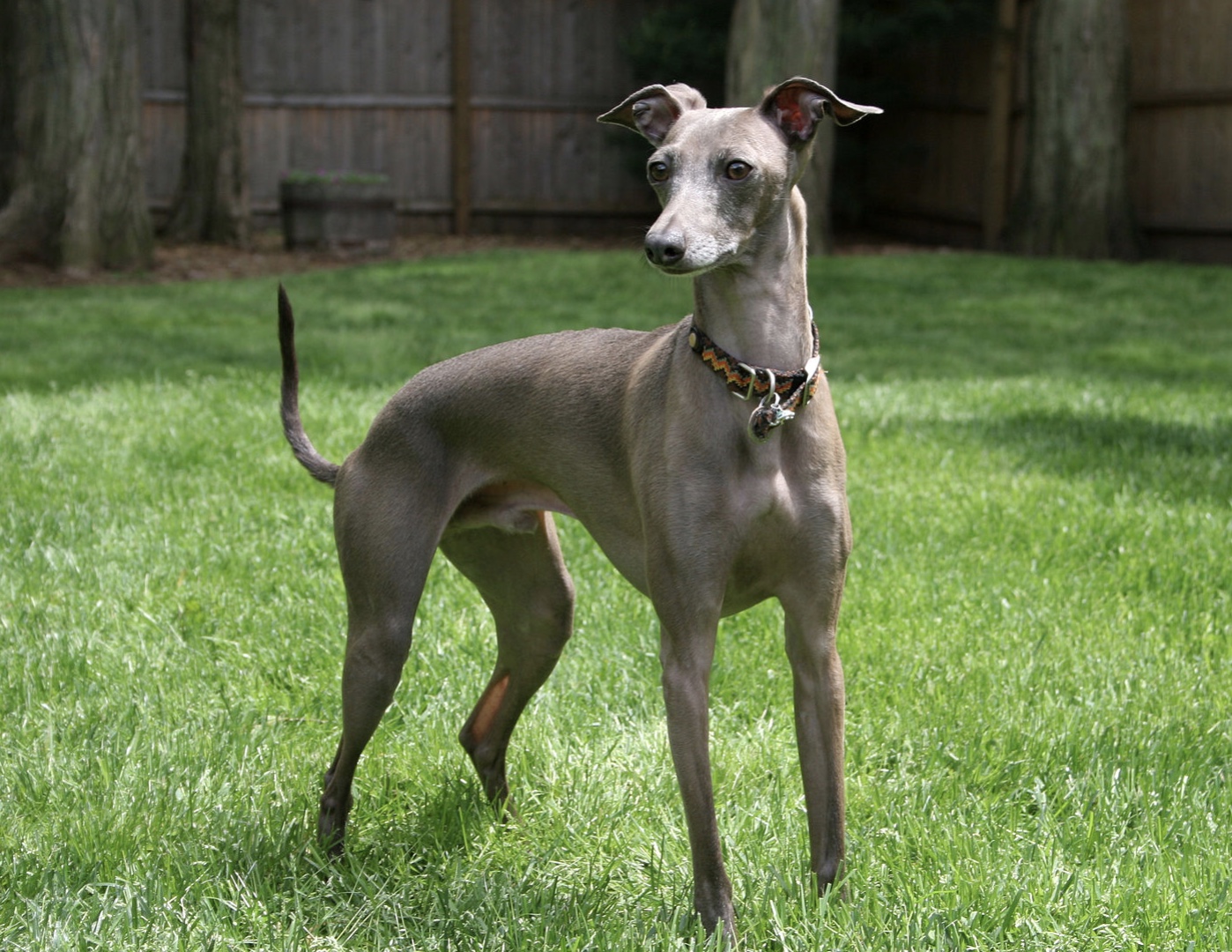 The Italian Greyhound is a true Greyhound in a miniature body. Alert, playful, and highly affectionate, this almost toy companion is a decorative couch dog.

Yet, this small dog is also ready for running at any time. They stand at 13 to 15 inches at the shoulder and have sleek and curving lines common for coursing hounds.

They combine the attentiveness of a lap dog with the complexity of an ancient and aristocratic hound. 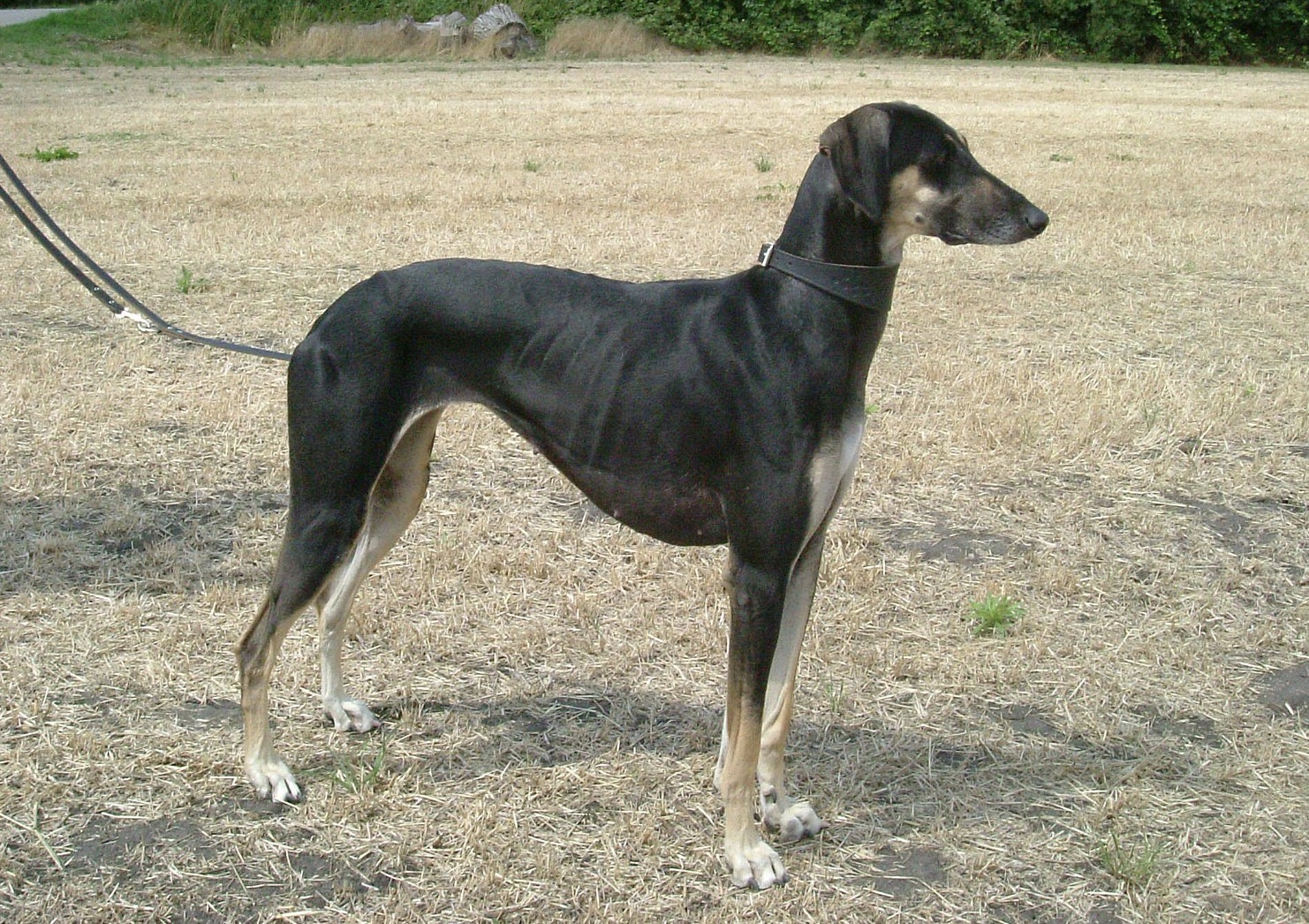 This might not be a name you hear often. But the Sloughi is an ancient breed, nicknamed the Arabian Greyhound. The Sloughi is a lean, swift coursing hound who hunted a variety of game in North American desserts.

They are a classic sight hound, and usually aloof with strangers and gentle with owners. They were bred to work on game like hare, fox, jackal, gazelle, and wild pigs. 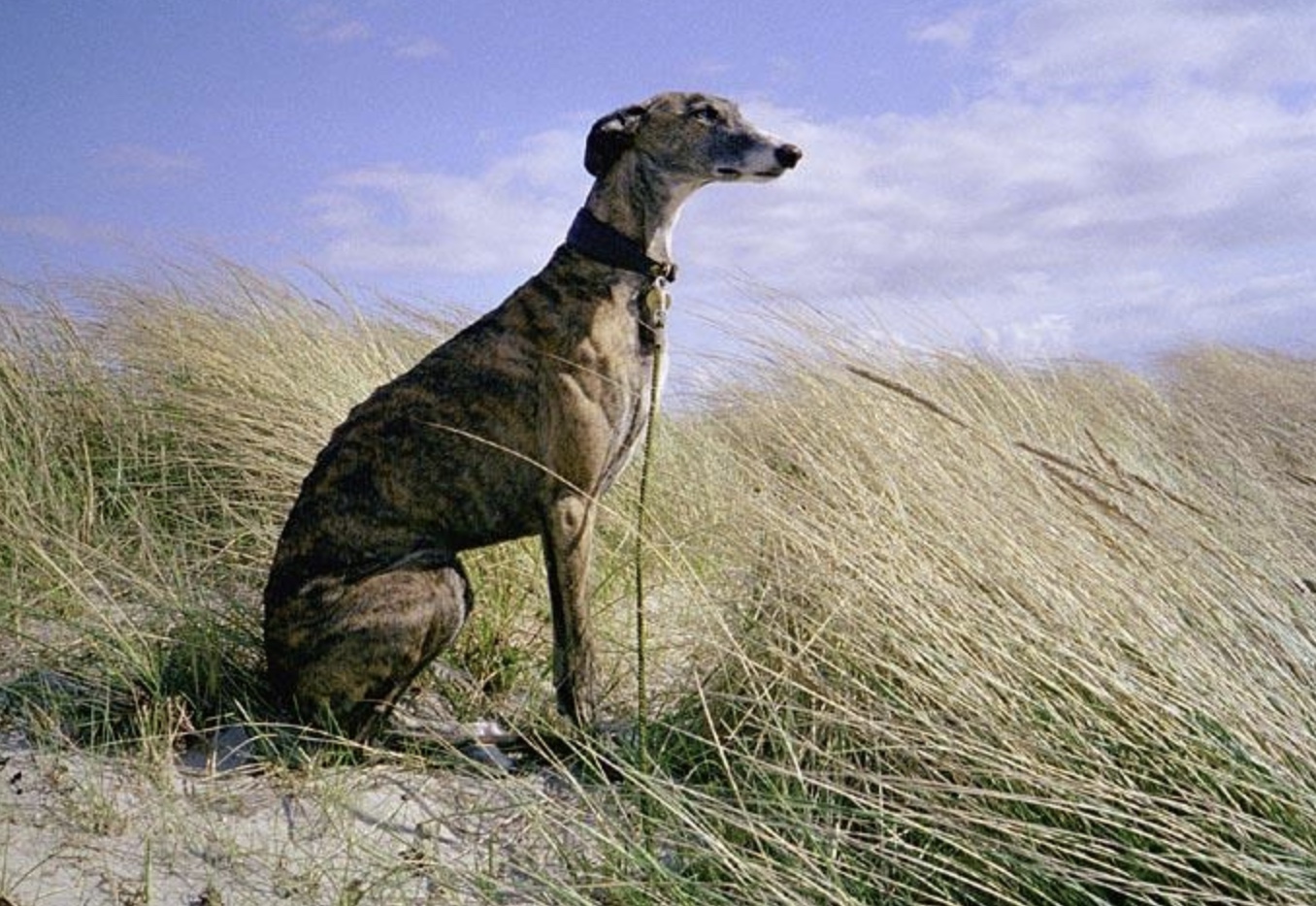 At one point in the 20th century, breeders actually crossed Galgo Espanol and English Greyhound to get a more powerful Galgo for track racing purposes.

They are similar in appearance to the Greyhound but are different in their conformation. They are higher in the rear than in the front and have flatter muscling than the Greyhound.

Another difference is they come in two coat types, smooth and rough. 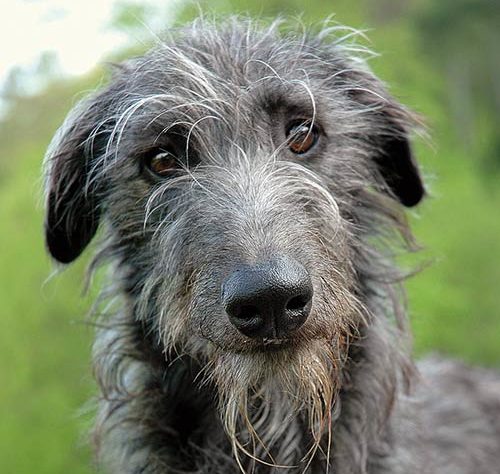 Named the Royal Dog of Scotland, the Scottish Deerhound is a majestically large dog. This coursing hound is among the tallest dog breeds.

They were bred to stalk the giant wild red deer. A good-size male can stand at 32 inches at the shoulders and weigh more than 100 pounds.

Basenji is among the most popular sighthound breeds. They are one of the few that have made it to the list of most popular dogs by the American Kennel Club.

They have distinctive traits with pariah dog types. They have been identified as a basal breed that predates the emergence of the modern breeds in the 19th century. 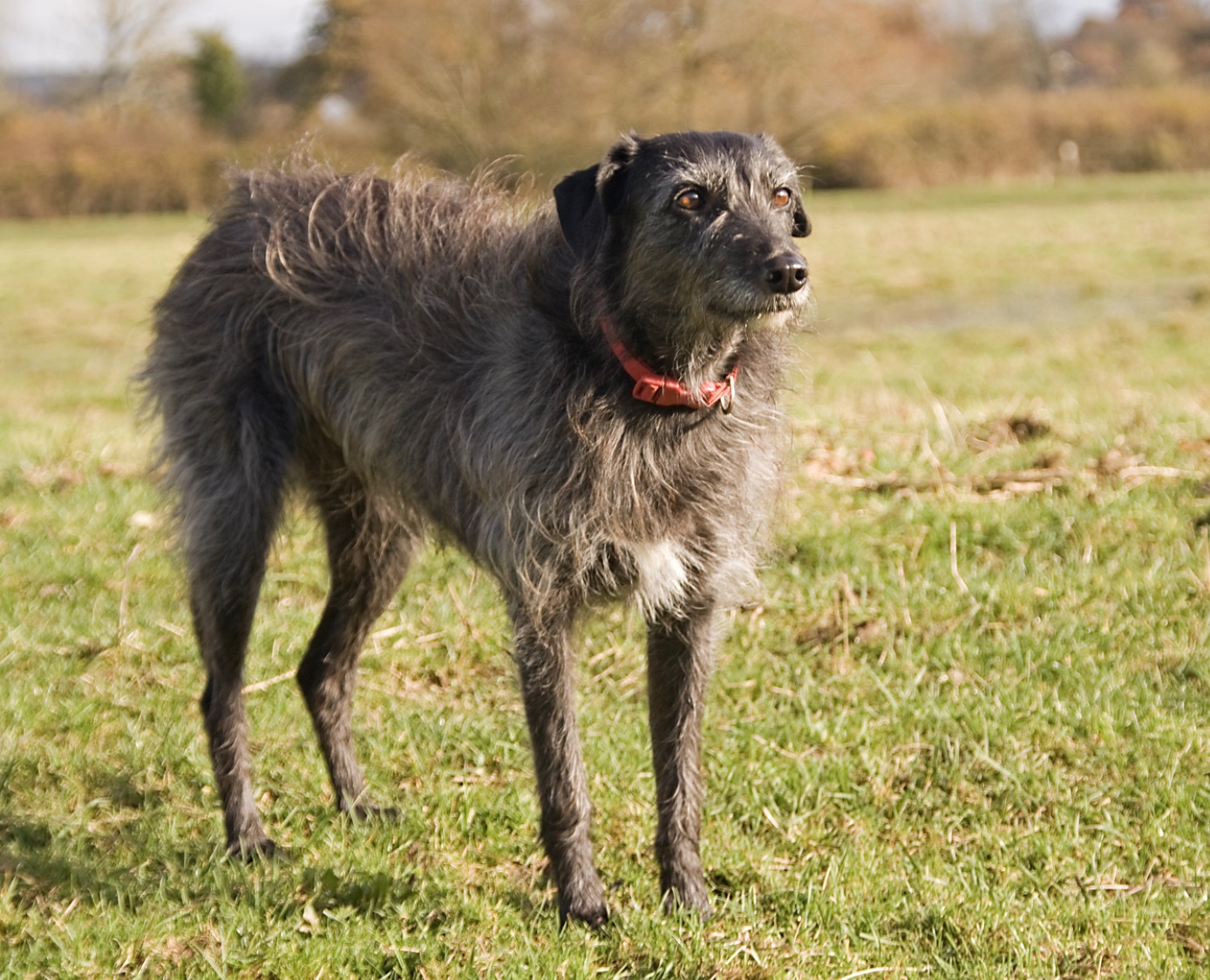 On our list of common sighthound breeds, we have the lurcher, a rarity on this list. He is a mixed breed dog, bred by mating a Greyhound with a dog of another type, usually a herding dog or a terrier.

He was associated with poaching for hundreds of years. Yet, in modern times, he is more of a hunting dog or companion dog.

Back in the day, he was bred in England to assist poachers in hunting rabbits and hares. Nowadays, they compete in sports like dog racing and lure coursing. 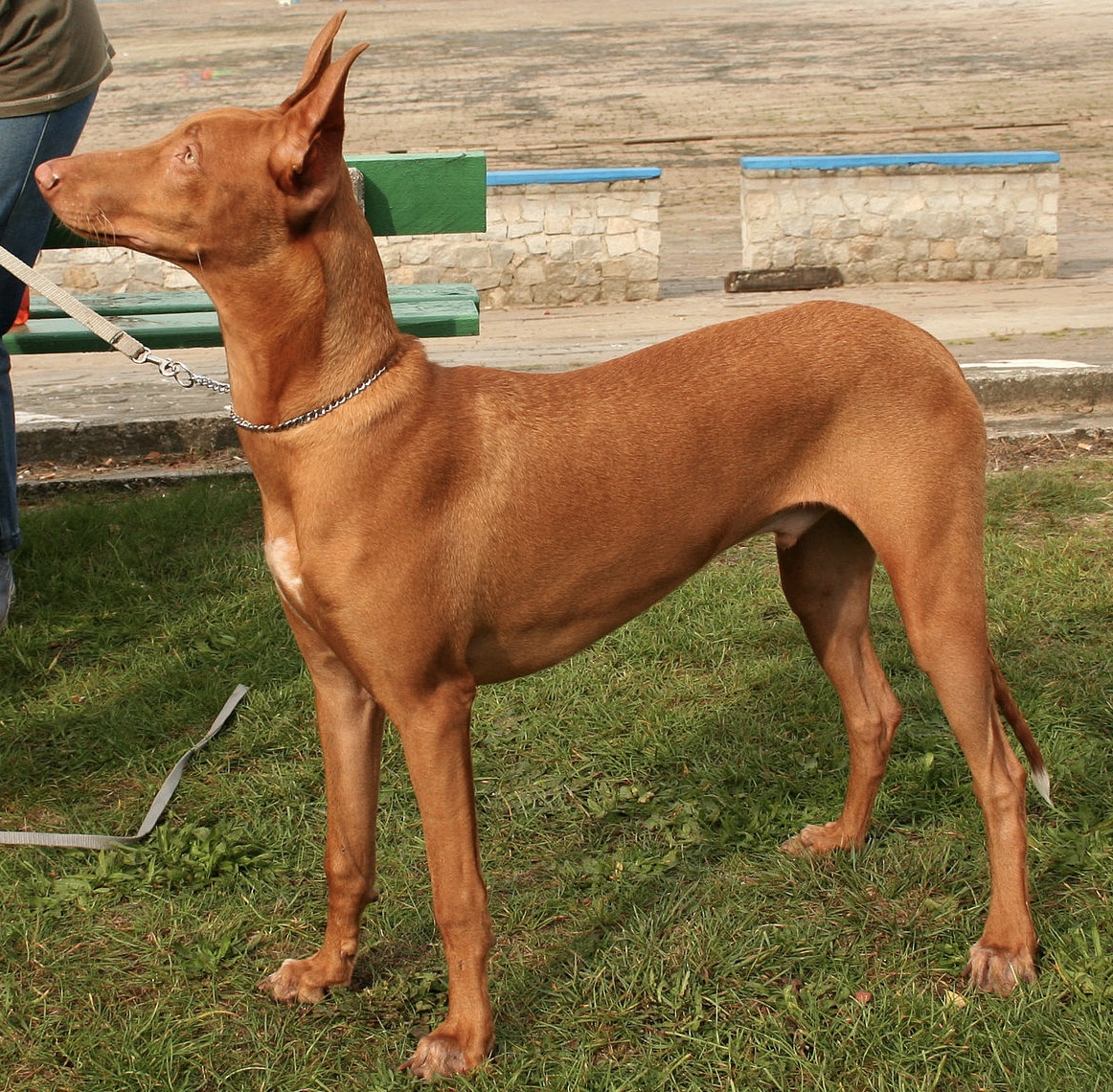 Let’s finish off the list with the ancient Blushing Dog of Malta. This elegant, yet rugged sprinting hound was bred to course small game over punishing terrain.

He is quick and tenacious on scent, and his sleek and aerodynamic appearance allows him to reach high-speed pursuit on rocky terrain.

Their most distinctive traits include a tight tan coat with matching leather on the nose, ravishing amber eyes, and a unique way of blushing when happy or excited.