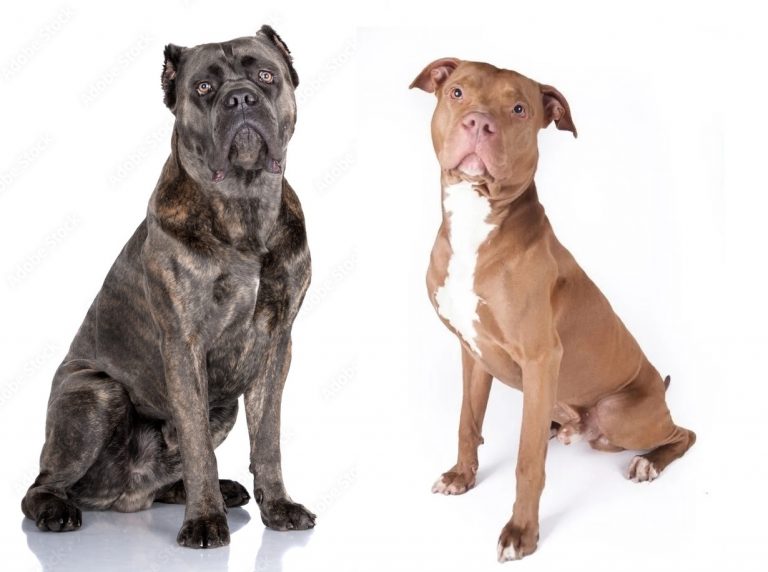 Today, we will discuss the similarities and differences between Cane Corso and Pit Bull. We will take into account their size, appearance, temperament, trainability, and health issues, and help you decide which the better pet for your needs is.

We have to say, it is a difficult choice to begin with. But with so many differences between the two, you can make an educated and informed choice.

We have to say, we have made a couple of breed comparisons when it comes to the Pitbull. It is a popular choice despite its bad reputation. Let’s begin.

When you look at the breed history of these two dog breeds, you will see they come from the Molosser family of dogs. Yet, it is important to understand the roots of their history so that you know their temperament and personality traits.

Because of their bad reputation and misinterpreted past, these two can often end up in shelters.

The Cane Corso is also known as the Italian Mastiff. This dog breed descends from the large Roman war dogs. He was originally used as a farm dog. In the beginning, he took roles in sheep herding, cattle droving, cart pulling, guarding the property, and more.

At one point, the Cane Corso breed nearly became extinct. Thanks to some breeders and fans, the dog was restored. A huge part in that played the Neapolitan Mastiff, heavily used in the restoration process.

The Cane Corso dog breed was first imported to the United States of America in 1988, and since then, he has proved to be a good family dog.

It wasn’t until 2010 that The American Kennel Club recognized this puppy. But his popularity has steadily increased over the years. A lot of people often mistake the breed for the Presa Canario.

The American Pit bull terrier, on the other hand, has yet to be recognized by The American Kennel Club. It is one of four breeds that falls into the umbrella term, Pit bull.

It is a descendant of dogs bred in England for bull baiting and rat pitting. Nowadays, this versatile dog can do almost everything. But the problem is that the Pittie has a bad reputation as a fighting dog. Sadly, that is the reason many of them end up in shelters without a dog owner willing to give them a chance to show their love and affection.

The American Pit bull terrier is quite an intelligent dog and a sweet family companion. A lot of people mistake it for the American Staffordshire Terrier. 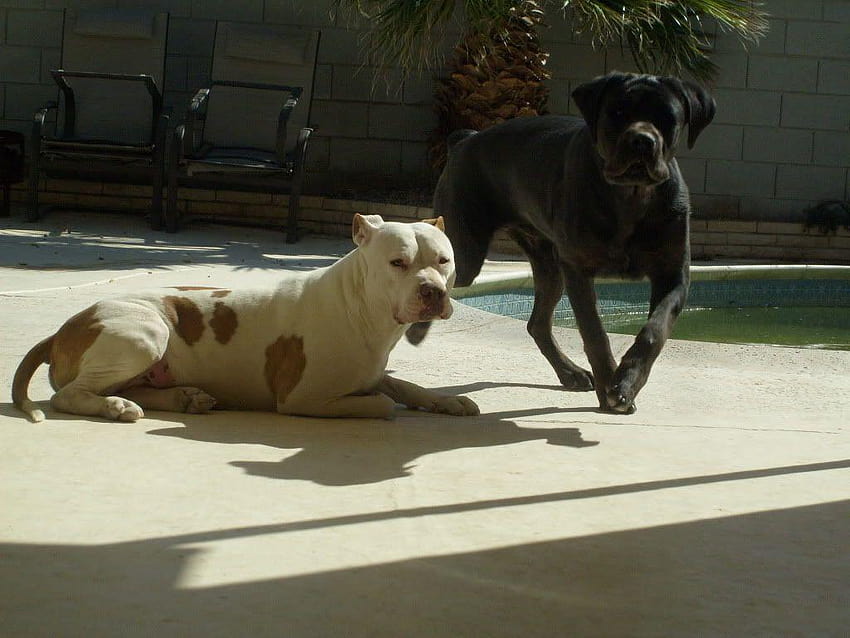 You might say these two are distantly related because they share the wolf as a common ancestor. But nothing more than that. The Cane Corso dog breed was developed from Italian dogs, while Pit bulls were created from Bulldogs and terriers in England.

One quick glance at these dogs and you instantly notice the difference. Cane Corso is a much larger and bigger dog than the Pittbull terrier. Both of these are muscular dogs, but the Cane is a large dog breed reaching up to 28 inches in size. Pit bulls, on the other hand, can reach between 13 inches and 24 inches. They are medium-sized dogs.

Weight is another factor. An Adult Cane Corso dog can weigh between 85 and 100 pounds, while a Pit Bull Terrier doesn’t go beyond 80 pounds, and that is in very rare cases.

Cane Corso has a longer and wider muzzle and a more wrinkled face. Out of the two, you can instantly say that the American Pit Bull Terrier is the more agile and athletic dog.

The big myth surrounding the American Pit Bull Terrier is that it has a locking jaw. But that is not true. The reality is that the dog doesn’t have a powerful bite force. Pit Bulls have a bite force between 300 and 325 PSI.

For comparison, Cane Corso has a bite force between 650 and 700 PSI. You have to remember, they were once farm dogs and hunting dogs, and they could easily kill wild pigs and boars. 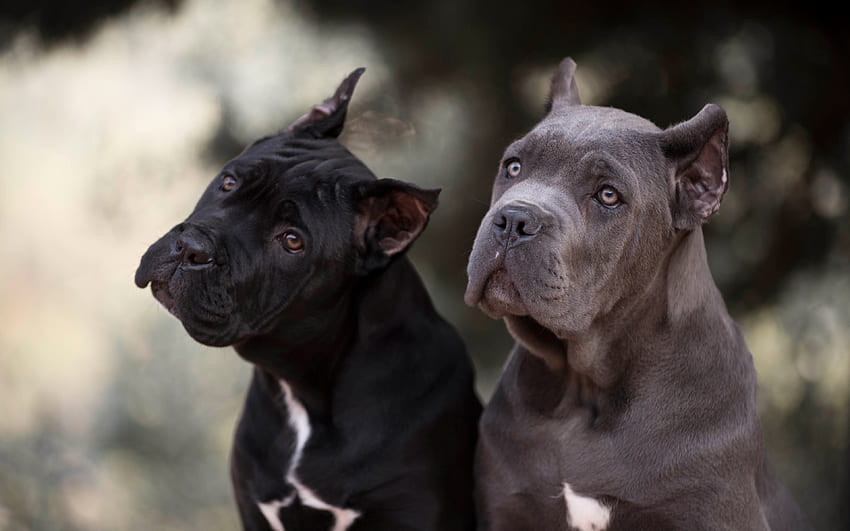 Both of these dogs have a bad reputation for being aggressive. But in reality, there is little to no chance to be attacked by either of them.

Yes, they do have a strong and powerful bite force. But when trained and socialized well, they display zero signs of aggression.

Yes, they receive a bad reputation, and they have been part of some horrific incidents. But there are also incidents involving a Labrador Retriever or a German Shepherd. So, no, they are not aggressive per se. No dog is aggressive. But if a dog owner raises his/her puppy to be aggressive, now that is a different story.

They are quite sociable, but that is also a problem. Because of their neediness and dependability on human companionship, they might suffer from separation anxiety.

These obedient dogs are eager to please their master. Of the two, the Pit bull is more sociable. This puppy is a friend to everyone, be it known people or strangers.

You have to remember that the Cane Corso is a more dominant dog. He needs a master who is up to the challenge. And because there were times when he was used as a guard dog, this canine is very suspicious of strangers. They rarely allow people near their family unless instructed.

When properly socialized, the Cane Corso will be friendly and accepting of newcomers when told to do so. 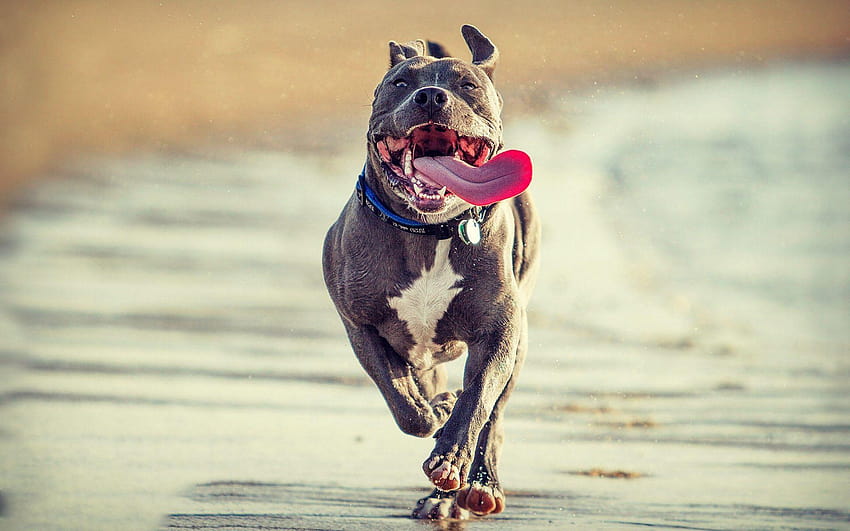 This is one area where the Cane Corso vs Pit bull debate and difference is obvious. The Cane Corso is a less athletic dog, but it still needs up to 60 minutes of walking and exercise per day.

But the American Pit Bull Terrier needs much more. This hyperactive dog needs between 60 and 90 minutes of play and exercise per day. When the Pit bull is bored, he might become destructive. You want to prevent that.

With that in mind, they are both partial to a snooze during the day.

As we said before these two dog breeds are eager to please their master. This makes them easy to train with consistent training. A prospective dog owner could use positive reward training for both of these puppies.

Bear in mind, the Pit bull dog is affection-driven. So, reward him with affection and cuddles and repeat “good boy” and “good girl” multiple times.

Of the two, the Cane Corso is definitely not a good option for a first-time dog owner. This dog will challenge the hierarchy in the pack if the master is not dominant enough. And you do not want a big dog like the Cane Corso challenging you when you walk in the park, right?

You have to socialize these two dog breeds early on. The Cane Corso has a tendency to protect its family against strangers. The American Pit Bull Terrier, on the other hand, has a fear of aggression against other dogs.

So, socialize them from an early age to prevent such problems. It will ensure they are comfortable with other animals, people, and everything in between. 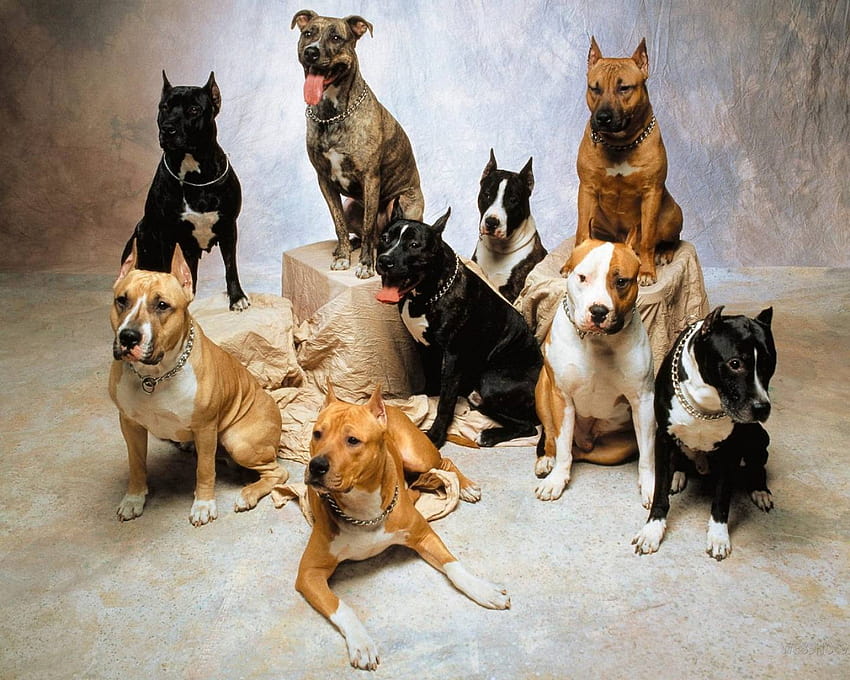 Dogs face common health issues, some more than others. Cane Corso is a large dog, so it is prone to more issues. Those include hip dysplasia, elbow dysplasia, cherry eye, mange, cancer, GDV, and allergies.

With that in mind, the Cane Corso has an average lifespan of 10 to 12 years, pretty good for a dog of that size. Large dogs do not get to that age often, but the Cane Corso does.

The Pit bull has a life expectancy between 12 and 14 years, making it the healthier breed.

Both of these dogs are affectionate, loving, and loyal dogs. But they have different personalities. It really depends on what you need from your dog.

For example, if you are fond of large dogs and you want a guarding pet, opt for the Cane Corso. If you want a friendlier puppy that will be sociable and affectionate with everyone, get a Pit bull.

We hope that our Cane Corso vs Pit bull breed comparison will help you make an informed decision.