Doberman vs German Shepherd – Who Is The Better Family Guard Dog? 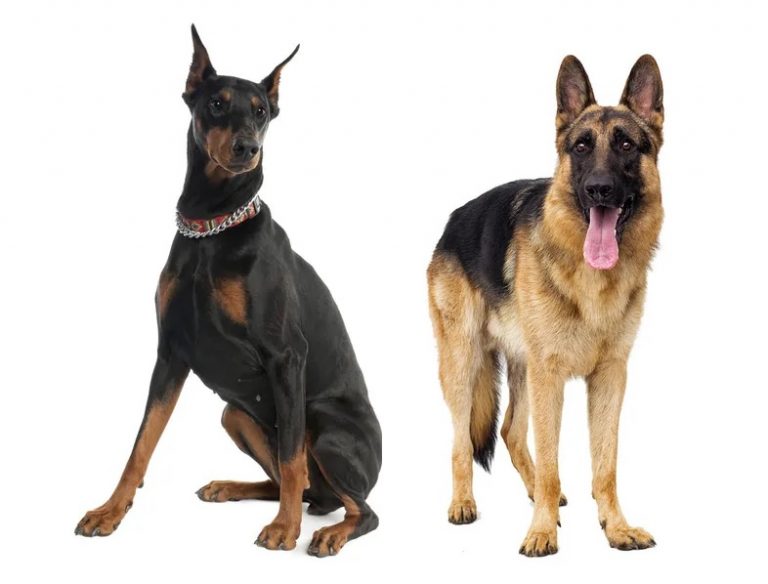 Finding a good guard dog for your family is not an easy task. Many dog breeds fit the bill, but which one to choose? For some people, it comes down to personal preferences. Others, want to do a bit of research before they decide. Today, we will try to help you decide between Doberman and a German Shepherd.

These breeds have quite a few similarities. For starters, both originate in Germany and were originally bred as working dogs. Nowadays, their versatility has helped them carve roles such as guard dogs, police dogs, working dogs, family dogs, and so on.

Beyond the many similarities, there are also some unique differences between each dog breed. Let’s talk about it. 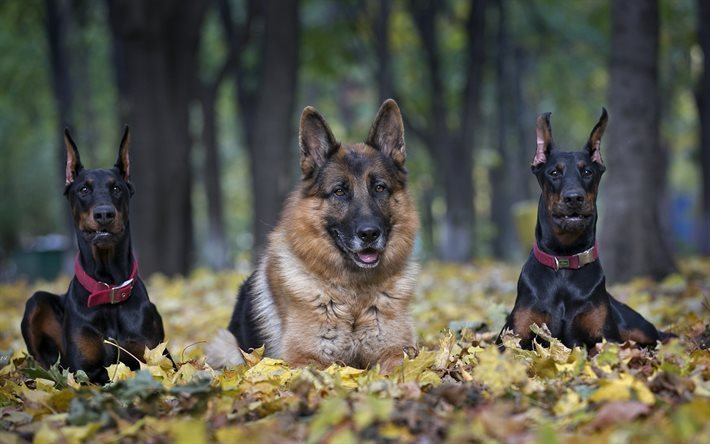 These same genetic traits persist today, which is why Dobermans tend to be more protective. But both were bred to help people.

Nowadays, a lot of people associate the German Shepherd dog breed with police work. But that was not always the case. In fact, Captain Max von Stephanitz developed the breed in 1889 in Germany for herding. He wanted to get a breed with high intelligence and utility that would be an efficient servant. At the same time, he wanted to standardize the herding breed.

At the time, all herding dogs in Germany were referred to as shepherds, but they didn’t share the same traits. So he mixed a couple of herding dogs to get the best specimen. During World War I and World War II, German Shepherds were used in Germany only, but after the war, American soldiers brought them to the United States.

Doberman Pinscher was also developed in Germany. He is also a relatively new breed of dog, standardized in the 19th century by Karl Friedrich Louis Dobermann.

This guy owned a local dog pound. There, he mixed a variety of breeds to get the Doberman Pinscher dog breed. According to some canine specialists, the breed has genes from German Pinscher, Rottweiler, Greyhound, Great Dane, Weimaraner, Old German Shepherd Dog, and German short-haired Pointer.

The Doberman has been used as a military dog and police dog over the years. Again, US soldiers were responsible for its popularity in the United States. They noticed their enemies used dogs as sentries and scouts.

In 1942, the Doberman Pinscher Club of America was asked to provide canines for the Marine Corps, and the Doberman became the official US Marine War Dog during WWII. 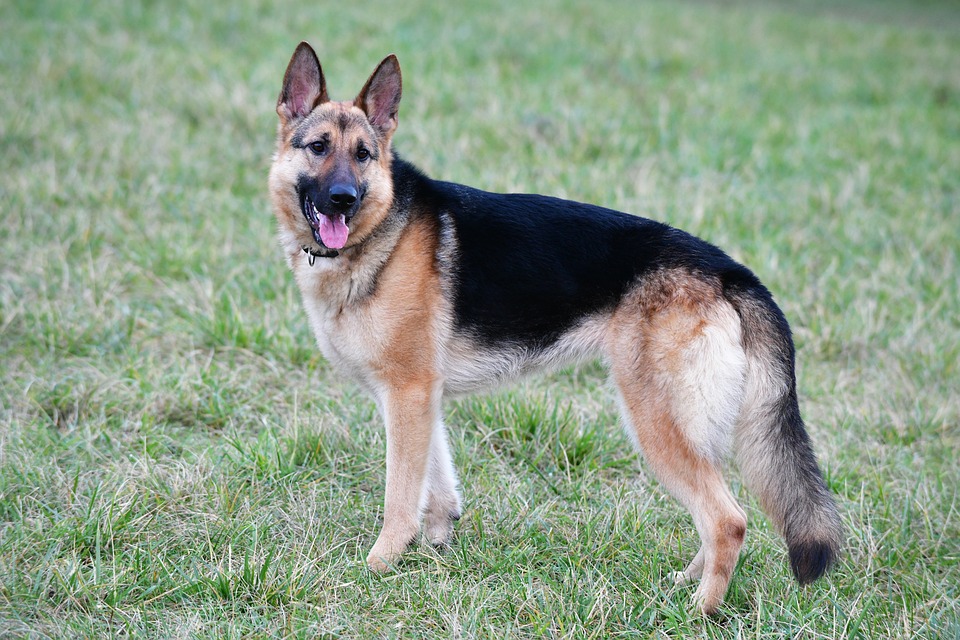 To start the Doberman versus German Shepherd debate, we have to look at each breed separately at first. German Shepherds were bred as sheep-herding dogs because of their intelligence, confidence, loyalty, and eagerness to please.

Relatively easy to train, the German Shepherd is among the most intelligent dog breeds. He is a fast learner who is motivated by rewards, praise, and play. The best way to train him is through playing games and rewarding good behavior.

These dogs have a lot of energy and need an environment that provides physical exercise and mental stimulation. Their life expectancy is between 10 and 13 years. 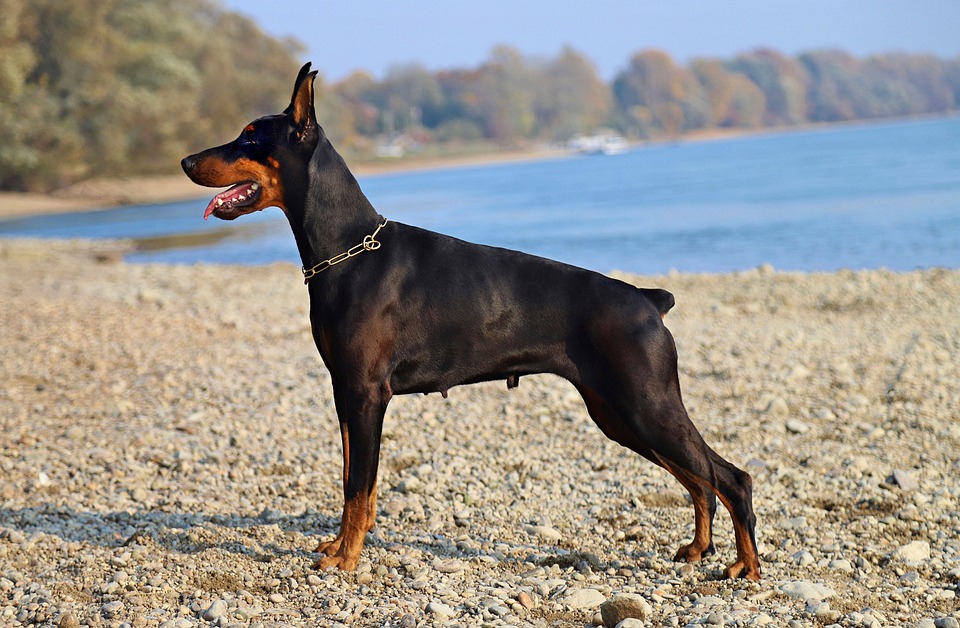 Protective by nature, Dobermans can become comfortable with strangers when socialized at a young age. They are high-energy dogs as well. Without proper exercise, they can become destructive.

Similar to the German Shepherd, the Doberman is a fast learner and is praised for his high intelligence. Dobermans need a confident and consistent trainer and a dog owner.

Their life expectancy is between 10 and 12 years.

One of the most obvious differences in the Doberman vs German Shepherd debate is the appearance. While they have a similar size, they look quite different.

Adult German Shepherd stands between 22 and 26 inches and weighs between 75 and 90 pounds. These dogs have a double coat with medium length. The American Kennel Club sets a breed standard for bicolor with black and tan, or solid black.

Adult Doberman Pinscher stands between 24 to 28 inches and weighs between 60 and 100 pounds. This dog has a smooth and short coat. The coat colors accepted by the AKC include black and rust, blue and rust, red and rust, white, fawn, and rust.

Generally speaking, herding dogs tend to be more intelligent than working dogs. Yet, even as a working dog, the Doberman is among the 10 most intelligent dog breeds.

These two puppies are quite intelligent. And they can both get bored without proper exercise and mental stimulation.

When you make the comparison between the two, the German Shepherd is smarter but more eager to please. The Doberman is so smart and can get bored with mental tasks, that he will constantly try to outwit you.

They are great guarding dogs and score high on the trait called guarding tendency. They will defend their family and territory. For both of these animals, guarding the family means guarding every family member. That includes children, adults, territory, the home, and even other animals that are part of the family.

In the home, their loyalty makes them great family pets. German Shepherds are considered slightly better with children than Dobermans. But both can adapt well to a high-energy family. Remember, it is important to teach your kids how to interact with dogs as well.

Up until 1983, both of them were classified in the same group of herding and working dogs. Herders are usually easier to train and more loyal. 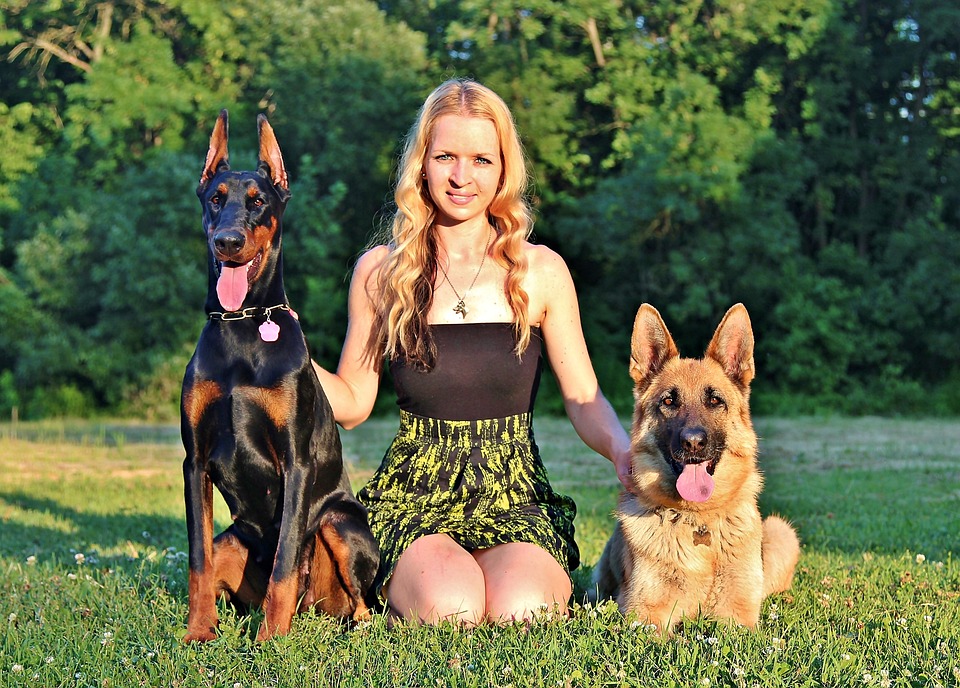 Let’s talk more in-depth about these dogs guarding tendencies. Remember, no guard dog is equal. Both Dobermans and German Shepherds thrive in the role, but there are differences in where and whom they guard.

Remember, the Doberman is a large dog, about two to three inches taller and 10 to 20 pounds larger. He is also quieter when trained properly. They are highly adaptable to your lifestyle.

Yet, if you are choosing between the two for protection, you cannot go wrong. They score high and off the charts in the guarding tendency.

The German Shepherd is a bit more vocal when guarding, while the Doberman lets his intimidating posture do the work.

German Shepherds also guard a wider spectrum of the family, because they were initially herding dogs that had to guard sheep as well. So, they guard other animals in the household as well. Dobermans can learn to live with other animals, but when raised together and socialized properly.

Why Do Police Use German Shepherds More?

Both of these dogs thrive in the role of police dogs. But there are small advantages to the German Shepherd. For starters, they have better control over their prey drive because they were bred as herding dogs. Their agility, trainability, eagerness to please, obedience, strength, and intelligence, give them all the features of a good police dog.

And then there is one added advantage. The German Shepherd has a double coat. Their undercoat adds extra insulation in different environments, including cold environments.

Both of these dogs are easy to train because of their high intelligence. But they demand a different type of leader.

German Shepherds are more eager to please and more obedient because of their herding instinct. The Doberman has a sense of independence that can pose a problem for an inexperienced trainer and owner. If you are not firm in your training, you will have challenges.

Dobermans respond well to gentle and positive training. German Shepherds as well, but they have less tendency to be defiant.

So, for an inexperienced owner, the German Shepherd is easier to train. 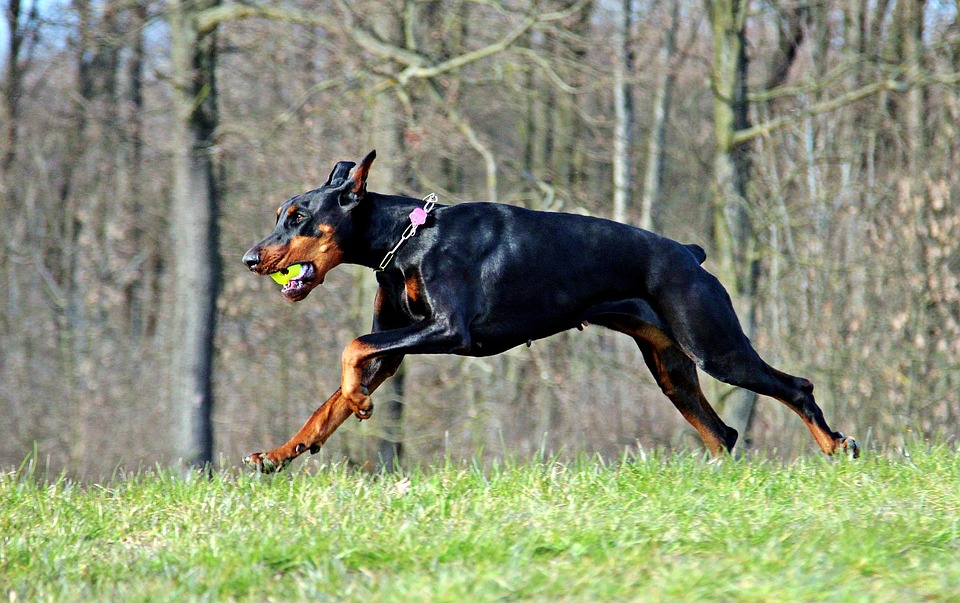 Both of these dogs are high-energy dogs, meaning they need quite a lot of physical exercise. But they also crave mental stimulation.

At least 60 minutes of exercise per day is a must. Dobermans are more adaptable than the two and can live in a smaller space like an apartment. German Shepherds need a yard where they can run and roam around.

The only downside of owning one of these dog breeds is health. Because of a lot of inbreeding, they have an inclination toward some illnesses. German ShepherdGSDs have a slightly longer life expectancy of between 10 and 14 years, compared to 10 to 12 years for Dobermans.

Both of them should get regular checkups at the vet.

Which Breed Is The Right For You?

Both of these dogs make loving and loyal family pets. But with both of them, everything starts with a commitment to training and socialization.