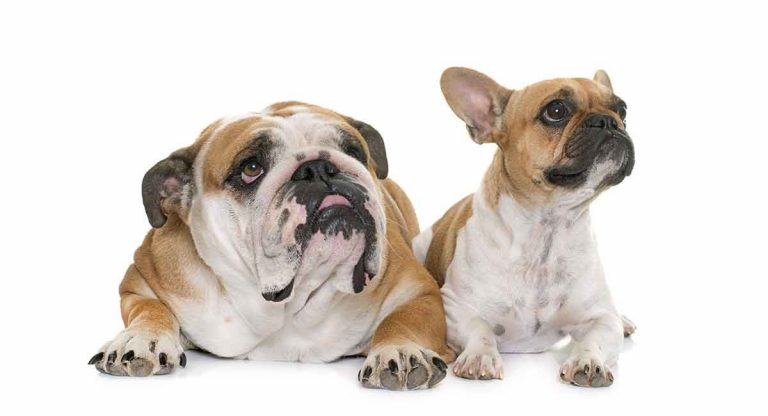 Bulldogs are some of the cutest and most adorable puppies in the world. It is no secret and no surprise both are among the Top 15 most popular dog breeds according to the American Kennel Club. But what is the difference when you talk about French Bulldog versus English Bulldog? At first glance, size and appearance is the only difference. But how much alike are they?

Let’s discuss this. These two brachycephalic dogs have similar names, but they are different. We know both are a brachycephalic breed, but exactly what does that mean?

The term refers to dog breeds with shortened snouts. And these two are not the only brachycephalic dogs. The list also includes Pug, Boxer, Shih Tzu, Bull Mastiff, Boston terrier, Lhasa Apso, Pekingese, and many more.

When we talk about French Bulldog vs English bulldog dog breed comparison, we have to start with their history.

The English Bulldog had quite a different purpose back in the day. The breed was created in England in the 13th century for the purpose of bullfighting. Nowadays, this couch potato doesn’t move for more than 10 to 15 minutes. Then, in the 1800s, the Old English Bulldog breed transformed from a fighter to a lover.

After the sport of bullbaiting was declared illegal, the fighting went underground. And now fighters wanted a more agile dog, so they crossed bulldogs with terriers, and came up with the American Pit Bull terrier. The English Bulldog breed was recognized by the American Kennel Club in 1866.

Here is a fun fact. The French Bulldog breed also got its start in England. But that happened in the 1800s when lace workers took the toy-sized bulldogs and moved to northern France. This happened during the Industrial Revolution.

The breed became quite popular in France and made its way to Paris eventually. There, they became popular sights in Parisian streets and cafes.

And here is another fun fact. He was actually bred from his English counterpart but crossed with smaller breeds such as Pug and some terrier-type dogs.

This is probably one of the reasons many people mistake the French Bulldog for the Boston Terrier.

Nowadays, he is a toy and lap dog. 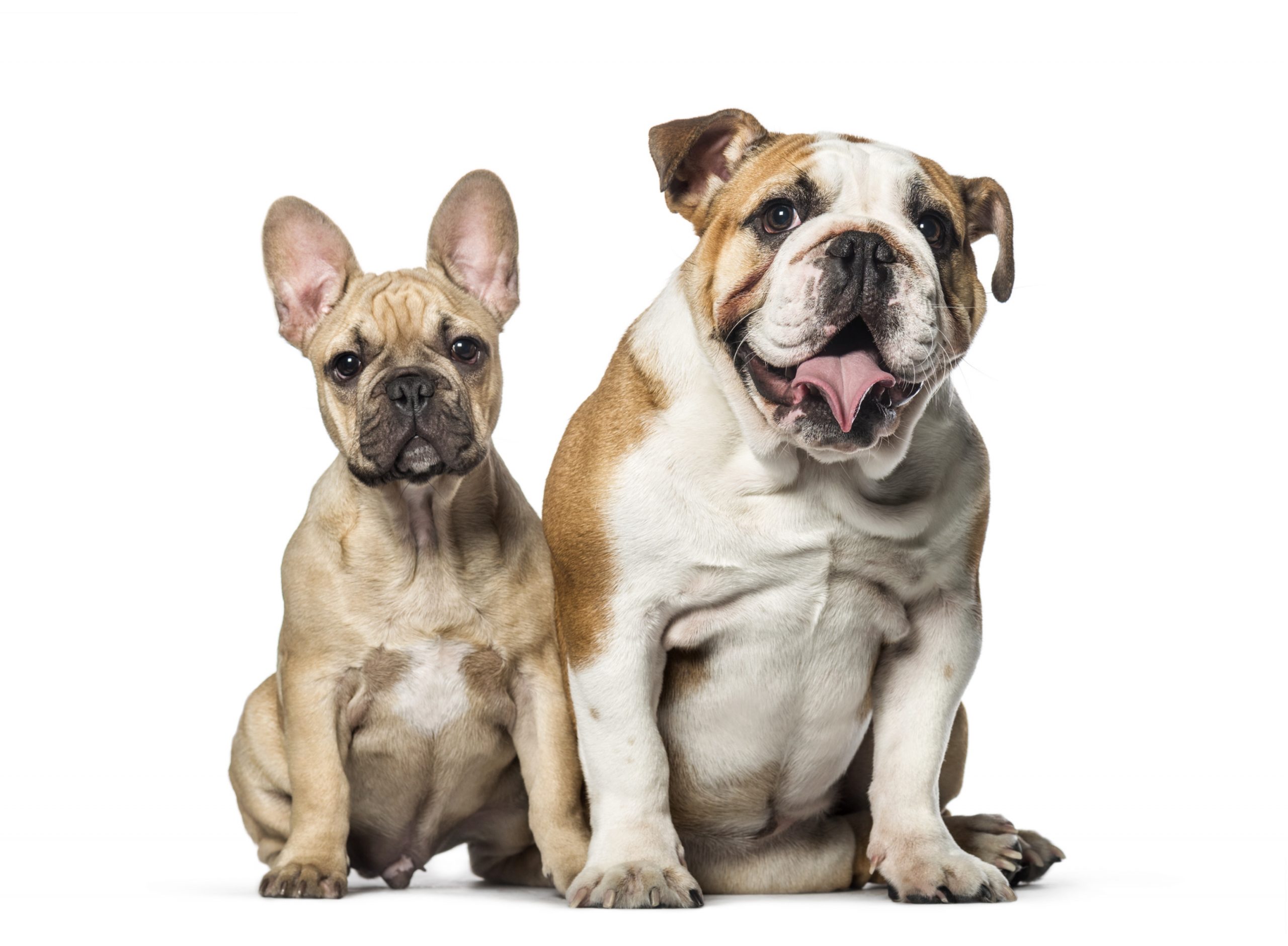 According to the American Kennel Club, there is a standard breed size for these two dogs. For the French bulldog, its weight is under 28 pounds, and its height is between 11 and 13 inches.

Now compare that with the English Bulldog. The AKC calls them bulldogs simply, and their standard size is around 50 pounds for males and 40 for females, and height is between 14 and 15 inches.

Even though the height difference is not large, the weight one is quite obvious. If you want a larger dog, then the English bulldog is the better choice.

The Frenchie and the English Bulldog are subject to appearance dog standards as well. As a brachycephalic breed, they have shortened snouts.

They are quite similar in a way they are stocky dogs with wrinkly and flat face. Their appearance features include short legs and smooth and short coat. They shed quite a lot, and they are not hypoallergenic breeds.

When you look at the two side-by-side, the English Bulldog puppy is stockier and wrinklier. And they have different ears. The Frenchie has distinctive bat ears, while its English counterpart has rose ears, ones that flop down and to the side.

They have short tails that can be straight or screw-shaped, depending on the litter. But no dog should have a curly tail.

Their coat colors include white, cream, and fawn, with the Frenchie also found in some rare colors, like Blue Nose French Bulldog.

When you talk about the personality comparison of the French Bulldog and the English Bulldog, we have to say they are quite similar. Sociable dogs who crave human affection, love to sit on their dog owner’s lap. As highly sociable dogs, they hate being left alone. And if left alone for longer periods, they might suffer from separation anxiety.

As lovable and sociable dogs, they are a perfect addition to any family and make great family pets. Their small size and gentle nature make them a joy for children who learn how to look and handle a dog.

There is one small difference between the two. The English Bulldog is the more relaxed dog breed. On the other side, the Frenchie is a silly dog who wants to be the center of attention and loves showing off its clown antics.

You can say that the French Bulldog is more energetic and determined. 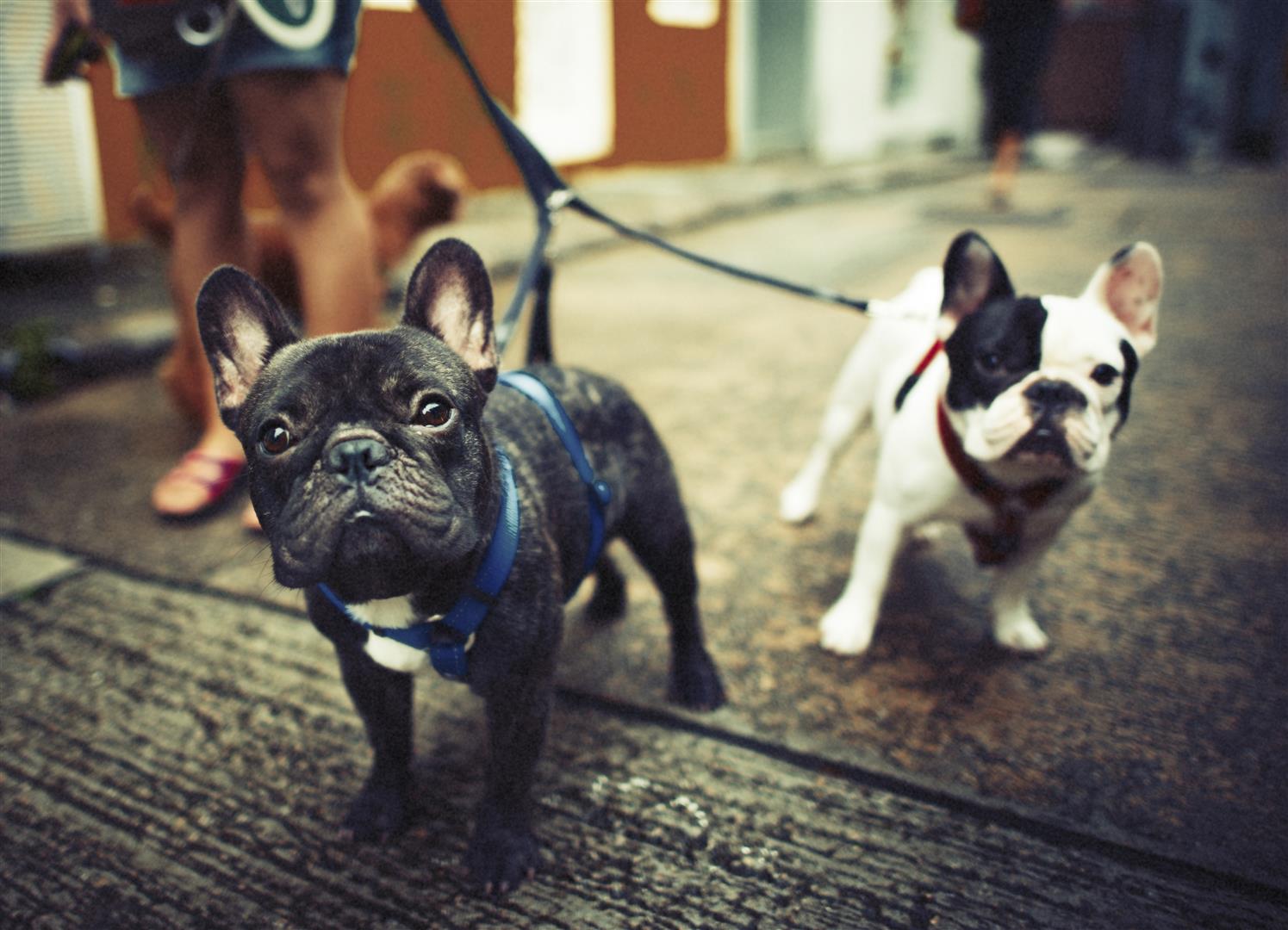 Their energy levels are quite the same. The AKC considers them low-energy puppies who need no more than 20 to 30 minutes of exercise per day. A walk around the block is quite enough for these two. They do need their toilet break, and nothing more.

Instead, they are happy to chill and nap all day long. These two are among the biggest sleepers in the canine world, able to sleep up to 20 and 22 hours per day.

Word of advice, because they are brachycephalic dog breeds, they do not handle humidity and heat well. So do not take them out on extremely warm days. Or wait for the sun to set and the temperature to fall.

These two present their own challenges. The French Bulldog is intelligent and will pick up commands easily, but he is independent. So you need to be a bit more consistent with your training.

You need to socialize these two early on so that they are comfortable in all situations with different people and animals.

When you talk about their grooming and maintenance needs, they are low-maintenance dogs. Yes, they shed, but they are fine with brushing once per week to keep their coat shiny. The English Bulldog is the one who sheds a bit more between the two.

The area where you need to put more effort and work is the wrinkle area. Make sure the skin between their folds is clean and dry to avoid any infection. This is a bigger job for an English bulldog dog owner. 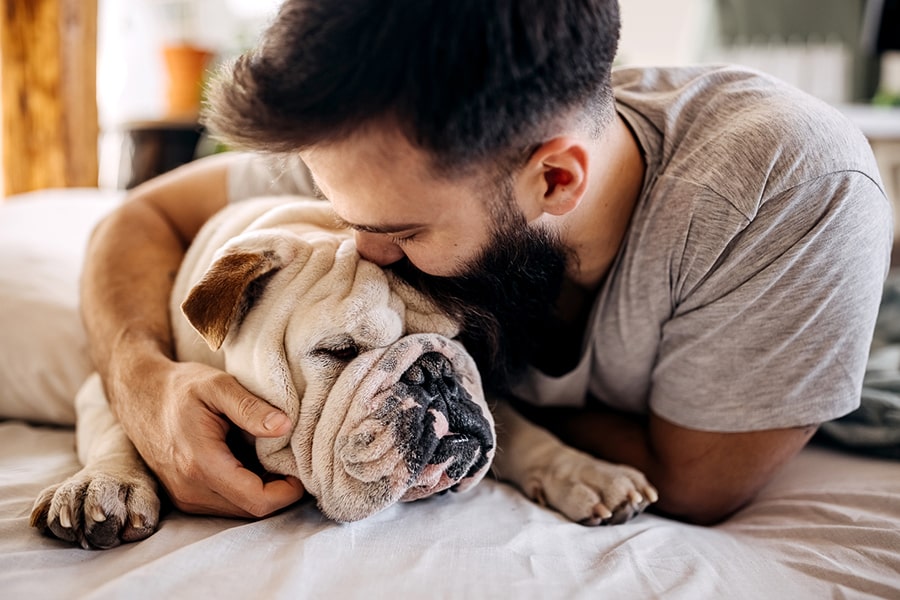 Sadly, these two beloved pets are not among the healthiest dog breeds. Because of their brachycephalic nature, they are prone to many health issues.

Their flat face and poor respiratory structure can cause issues with their breathing. In addition, they are prone to problems like patella evaluation, hip dysplasia, heart defects, progressive retinal atrophy, cherry eye, and more.

Both of these are quite popular choices for families and single people alike. If you are looking for a dog to bond with, you cannot go wrong with either breed.

Adorable in their own way, the biggest challenge is their health and lifespan. But don’t let that stop you from getting an amazing companion.