Golden Retriever vs Labrador – Who is the Better Family Pet? 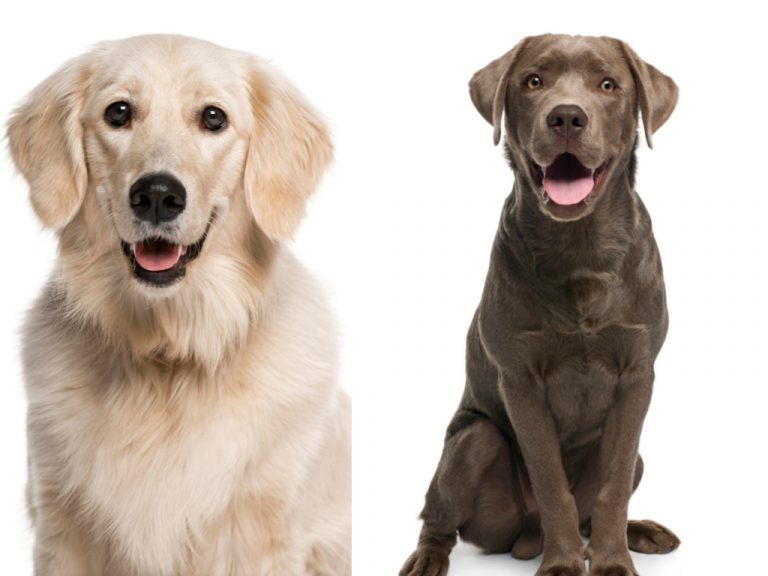 Are you the newest member to join the Golden Retriever vs Labrador debate? Are you trying to decide between these two family pets? These popular dog breeds might be similar, but they are also different.

Today, we will try to look at the dog breed comparison between the Golden and the Labrador Retriever. And in the end, we hope you can make an educated choice between the two.

For example, the Golden Retriever was bred in Scotland in Great Britain in the 19th century. They were the result of Lord Tweedmouth. He wanted a gun dog that was different than other dogs in the country. So, he used his breeding experience to come up with the Golden Retriever we have nowadays.

He came up with the dog as a combination of the Tweed Water Spaniel and the then Golden Retriever, as well as the Bloodhound and Irish Setter. So, the Golden we have nowadays is a combination of four dog breeds.

According to Lord Tweedmouth, the perfect gun dog has the ability to sniff out the prey, collect it without mauling it, and after 50 years of engineering, he had it. His sons sailed the dog across the Atlantic Sea to America, which is where the Golden Retriever’s popularity increased. The Americans fell in love with the perfect working skills of the Golden, as well as his grace and beauty.

In the early days, the Labrador was the fisherman’s favorite and was best known for collecting ducks, fish, and other small water creatures.

Here is a fun fact. His popularity began when visiting English nobles sailed him back to Britain.

Nowadays, you also have American Labrador and English Labrador.

Similarities between the two

There is no such thing as a Golden Labrador.

Another misconception is about the history of the breed. Prospective dog owners should understand both are retrieving type dogs, they were bred for such a thing. So, expect your puppy to pick up objects in the home and move them around.

Both are medium-sized dogs, with the Labrador Retriever dog growing half an inch higher. On average, the Labrador dog is also heavier, by five pounds. But that is only the weight of a bag of sugar. There isn’t much of a difference.

Looking at their appearance, the Golden Retriever puppy is more graceful because he is more slender. The Labrador looks a bit beefier, but that is mainly due to the coat.

Because the Golden has an outer coat that is longer and wavier, they have a more elegant look. The Labrador also has an undercoat and outer coat, but the outer coat is shorter and denser.

The big difference in appearance comes in coat colors. The Labrador can come in different colors, including brown Labrador, chocolate Labrador, black Labrador, yellow Labrador, and more. The Golden sports only one color, which is Golden. But there is also an English Golden Retriever, which is white.

The Golden also has a longer tail, it is another elegance factor. The Lab’s tail is long, but thick with short hair and resembles the tail of an otter.

There is a reason why the American Kennel Club has the Golden and the Labrador in the top 5 most popular dog breeds for many consecutive years. Both are similar in their popularity due to their temperament.

The Labrador is the most popular breed according to the American Kennel Club, with the Golden at Number 3.

They have similar temperaments. That means these two canines are kind, sociable, obedient, affectionate, and friendly.

Because of their affectionate and friendly behavior, these two are favorites to crossbreed with other dogs. For example, you have mixes like Goldendoodle, Labradoodle, Goberian, and more.

At home, if the Golden Retriever has taken his daily exercise, he is chilled-out and well-mannered. He likes to play and have fun, but he is a calm puppy. This is a misconception among people, they think the Golden is a hyper dog at home. That is not the case.

The Labrador retriever at home needs mental stimulation. He is highly energetic and needs longer and more intense exercise. He is sweet-natured and loving at home, making him a great family pet.

We said in the beginning that both breeds live between 10 to 12 years. They are perfectly suited for an active family.

And like any purebred dog, they have a few health concerns. Both are susceptible to hip dysplasia, elbow dysplasia, and progressive retinal atrophy. Goldens have a predisposition to cancer as well. This is why they are on the list of dog breeds vets do not suggest.

And we haven’t even mentioned ear infection, which is common because of their floppy ears.

Labs do not have these issues.

Because they have a double coat, which is their natural defense against elements, both breeds need brushing once or twice per week. They were bred to live in the Canadian Cold and Scottish Highlands.

During the winter days, their undercoats grow thick and dense to keep them warm. But when spring arrives, you can expect quite a lot of shedding.

Regarding grooming and maintenance, the Golden Retriever is slightly more demanding because he needs more grooming. That elegant coat needs some care.

Let’s talk about exercise for a moment. This is an important aspect of the Golden Retriever vs Labrador Retriever debate.

Both canines are working dogs, meaning they need quite a lot of exercise. On average, they should get at least 60 minutes of exercise per day.

The good news is you can easily play games with these puppies. They enjoy retrieving objects. So, playing games like fetch will suffice. You should expect to buy plenty of balls and Frisbees. They also love participating in dog agility courses.

One difference is the Lab needs a bit more mental stimulation. He is a restless dog and can become destructive. They suffer from separation anxiety more than Goldens.

Both of these breeds are on the list of most intelligent dog breeds. And because they love pleasing their master, it is quite easy to train them. They have the perfect combination that makes them easy to train.

Trainability is one of the main reasons why these puppies are selected as a guide dog for the blind.

These puppies are some of the friendliest dogs in the world. Yet, they still need a bit more socialization. In this regard, the Labrador can be a bit more alert to strangers and other animals compared to the Golden.

When you think about it, the Golden Retriever puppy is your classic happy-go-round dog. With proper socialization though, both can grow up into well-mannered dogs.

Which one is the right for you?

We hope that you can make an educated choice now. We are at the end of the Golden Retriever vs Labrador debate. Here is our suggestion.

You are a Golden Retriever lover if you are:

You are a Labrador Retriever Lover if you: