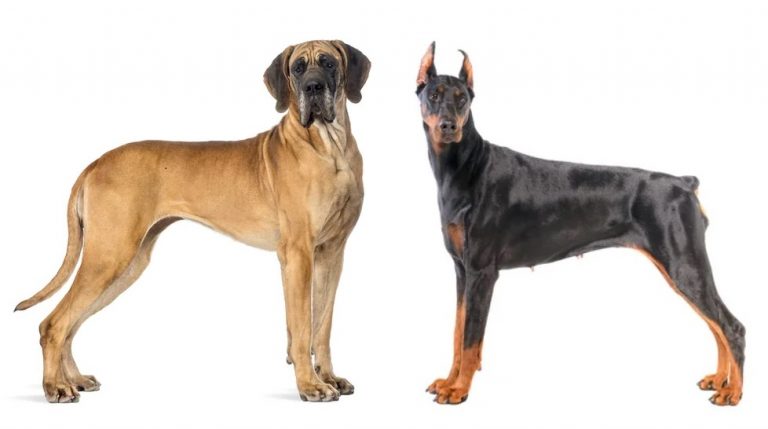 Are you considering getting a large breed dog? Do you want a guard dog that is also a great family pet? Well, today, we will try to break down the comparison between Great Dane and Doberman. Truth be told, you cannot go wrong with either one.

At the end of the day, it really comes down to your preferences. Yet, hopefully, we can help you make an educated decision. Despite their similarities, there are several key differences between these two canines.

Some of the big differences between these two large dog breeds are appearance, temperament, and health factors. Let’s take a look.

Whenever you want to compare two dog breeds, you have to start with breed history. This will help you understand how these dogs were used in the past. And often, their instincts remain.

First, let’s talk about the Doberman Pinscher, a dog breed originating in Germany. Their founder, Karl Friedrich Louis Doberman wanted a working dog that would also have a charming personality.

Louis Dobermann was a tax collector who developed the dog breed as a working dog, a guard dog, and a family pet. The large breed was first developed in 1890, but it took some time to get to the United States of America. Nowadays, it is recognized by The American Kennel Club and is one of the more popular dog breeds.

The Great Dane also has origins in Germany. There, this giant breed dog was bred as a working dog.

But let’s not get ahead of ourselves. Initially, the Great Dane was bred in Europe. In the 16th century, nobility in different countries began importing strong and long-legged dogs. They descended from England and were a cross between English Mastiff and Irish Wolfhound. These dogs were called Englische Docke, or Englischer Hund in Germany.

The name meant English dog, but it wasn’t until 1879 that a committee in Berlin changed the name from English Mastiff to Deutsche Dogge, meaning German Mastiff. This was the Great Dane. It laid the foundation for the dog breed. Despite originating in Germany, people still think the name Great Dane suggests Danish origin.

The large-sized dog descends from hunting dogs. Back in the day, it was used to hunt big game like deer and wild boars. 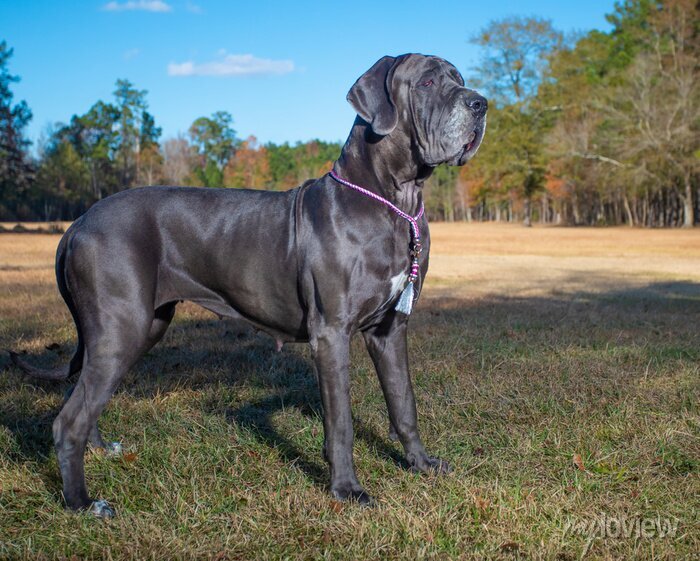 And while these two might not be much different in height, their weight is largely different. Great Danes are among the biggest dogs, weighing between 120 and 200 pounds. On the other hand, an adult male Doberman Pinscher weighs between 90 and 100 pounds.

Speaking of their coat color and length, Dobermans have a short coat that is smooth and lustrous. Great Danes also have a single short coat.

As for the colors, Dobermans are available in black, dark red, and fawn with some rust-colored markings on the face and body. Great Danes, according to The American Kennel Club, come in the following coat color options: fawn, brindle, black, blue, mantle, merle, and harlequin. Fawn is the most common option. 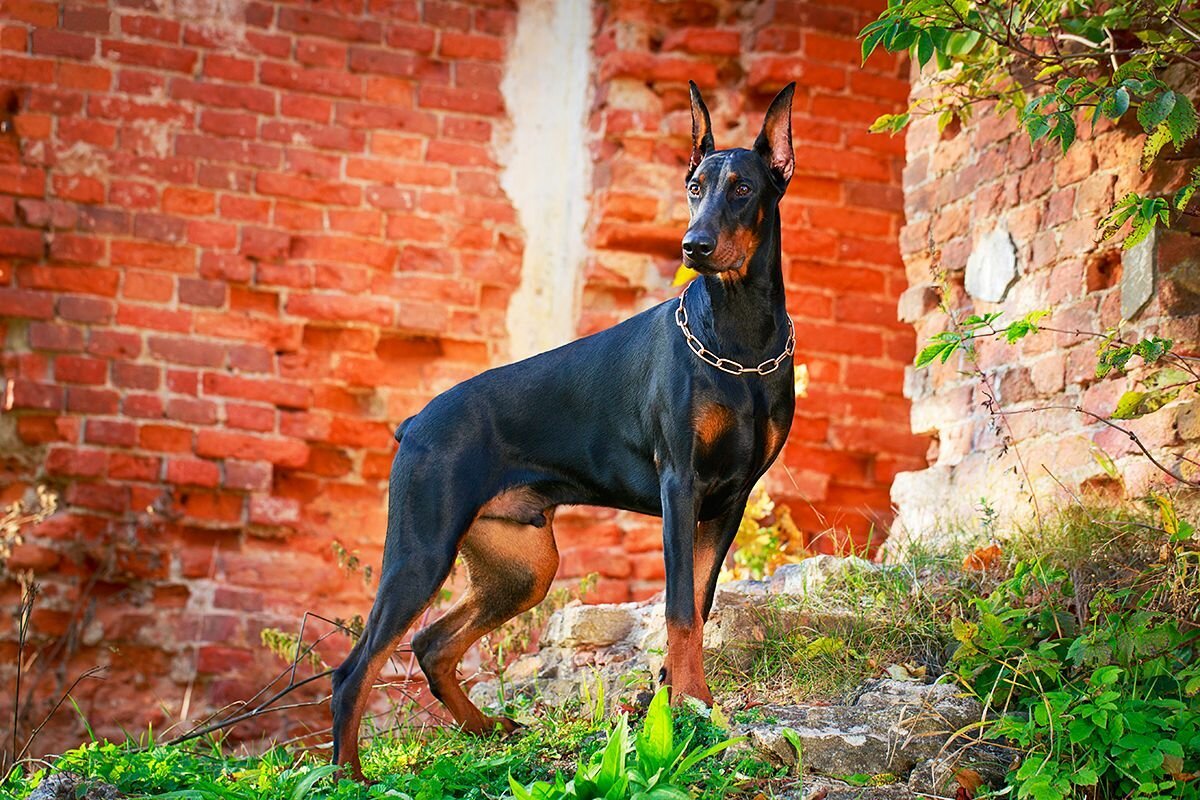 Usually, temperament is the deciding factor in any debate, the same as with the Great Dane versus Doberman debate. It is an interesting subject. We have to say that there are many misconceptions about both dogs. Dobermans are misunderstood dog breed.

While they look ferocious and intimidating, Dobermans are gentle. And the Great Dane is a gentle giant that your family will love. They are affectionate and friendly, yet, will protect and defend their home when necessary. Great Danes are fairly playful and will romp around the yard. They love children of all ages.

Listed as a working dog breed, Dobermans are quite energetic. They were never herding dogs but might have a tendency to round up kids and small animals. Early socialization is important for both dog breeds.

Dobermans are soft and equally affectionate with adults and children. They might be even more affectionate than Great Danes.

Because of the practice of ear cropping, they have been viewed as dangerous and aggressive dogs. But that is not the case. They are adorable and big softies.

Yes, Dobermans retain their protective instinct. They can be aloof around strangers. But with early socialization and proper training, you can make them friendlier.

When it comes to training, Dobermans are miles ahead of their competitor. They are among the most intelligent dog breeds. Intelligent and eager to please, Dobermans will learn basic and advanced commands with astonishing speed and ease.

They do have a natural protective instinct and tendency. You do not have to train them to protect you. Even more, you need to socialize them with different people and animals so they are less protective and friendlier. Otherwise, they will be aloof and protective around strangers.

Be consistent and use positive reinforcement strategies. Dobermans are mostly motivated by food. But do make sure to include mental stimulation games during training. It is a surefire recipe for success.

Great Danes are also easy to train but will need a bit more time and repetitions to learn. Unlike Dobermans, they do not have as high a protective instinct. Instead, they are friendlier. Yet, you still have to socialize them. Their big size is a problem, and your gentle giant needs to learn how to use its size when playing and interacting with people and animals. 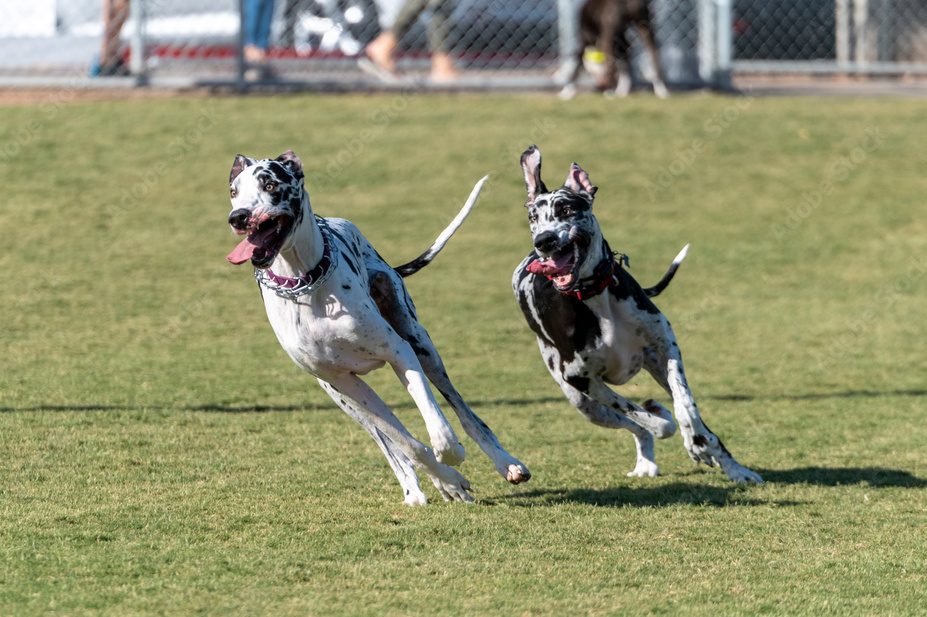 When it comes to exercise, you have to be ready for long walks and lots of play with these two dog breeds. They are highly energetic. But with a Great Dane puppy, you need to be a bit careful and gentle. Remember, they are among the largest dog breeds, Because of their rapid growth, they are prone to hip health issues.

Make sure you play and exercise them gently. If exercise is too strenuous, it will put a strain on their developing joints. So, if you want a Great Dane jogging or hiking partner, wait until your Great Dane puppy is fully grown. Do not force exercise until they are at least 6 months old.

Dobermans are working dogs, and as such, they need at least 60 minutes of exercise per day, preferably 90 minutes. And that should include a lot of mental stimulation as well. You need to exercise their body, but also their brain.

When you have a purebred dog, you have to be ready for some health issues. Usually, mixed breeds are healthier. Great Danes are giant dogs, and as such, they are prone to many health issues.

Some of them include bloating, cataracts, hip dysplasia, osteosarcoma, skin irritation, cardiomyopathy, and more. Their big body is prone to breaking if you too much strain.

Doberman puppies have a lot of health issues as well. But, if you get them from a reputable breeder, you lower the risk for potential health problems. With that in mind, your Doberman Pinscher dog is prone to albinism, hypothyroidism, narcolepsy, Von Willebrand’s illness, Wobbler’s Syndrome, and hip dysplasia. 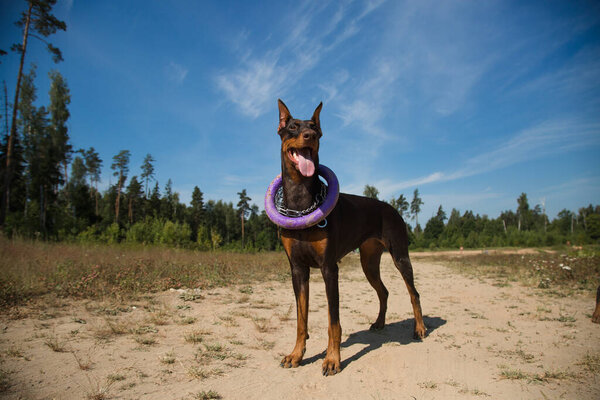 Generally speaking, large dog breeds live shorter lives than small dogs. And the Great Dane is among the largest dogs in the world. Sadly, that means the Great Dane has a life expectancy of 8 to 10 years, with some claiming it is between 6 and 8 years.

Dobermans, on the other hand, live longer, between 10 and 12 years on average.

If your factor for choosing one of these pets is grooming, we have some good news. They both have short coats and are relatively easy to groom. You will not spend a lot of time brushing their delicate and smooth coat. Dobermans need a bit more brushing because they have undercoats around their neck.

If you got here, you are probably a fan of both dogs. So, it is a bit hard to choose between Great Dane and Doberman.

We have to say, both are very big dogs. And they will need space to roam and play. You might have seen them in an apartment, but these large dogs need plenty of room to move.

Hopefully, after reading our full breed comparison, you can make an informed decision. At the end of the day, small things decide. And it comes down to your preferences. 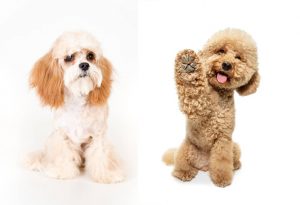